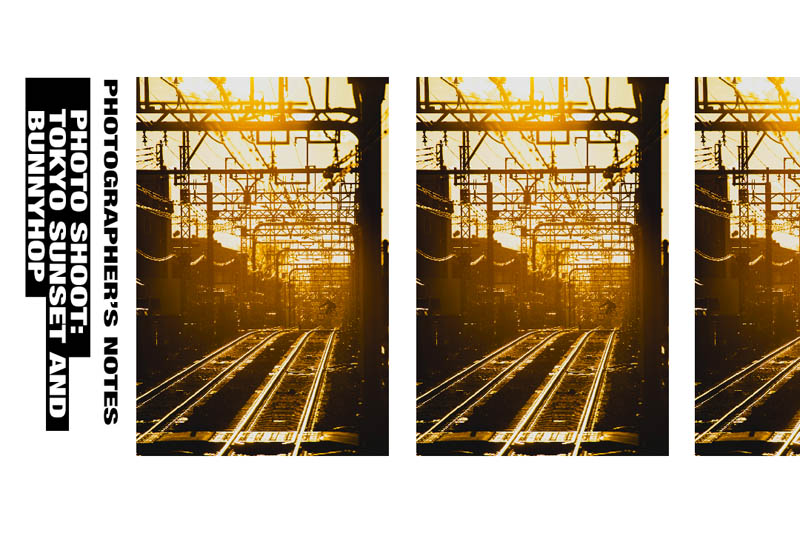 The other day I was waiting for the train and looked down the line to notice the sun setting — and the light was just amazing.

As soon as I saw the light of this sunset, I knew I wanted to shoot something at this location with this light! As I wanted to keep the action simple, I decided that a nice clean bunnyhop would be best, and contacted my friend Tsutomu Kitayama to see when he was able to go.

Two days later we had sunny clear skies. So we met up at the station and went to work.

As safety is paramount in anything I do I made sure the location I was shooting from was up and off the tracks, and ended up actually shooting from a corner of the station. In Japan many people like to photograph the trains so it’s not weird to see someone with a camera shooting from inside the station. Although I probably stood out, there was no problem shooting there.

I had the composition of the shot in mind the moment I saw the sunset that first day. Now, all we had to do was wait for the sun to get into position.

As you can see in the picture, we were quite far apart, so to communicate we stayed connected to each other via an app. I used some bluetooth headphones so I was able to move and shoot while talking to Tsutomu, who was about 200 meters away. We took a few test shots while waiting and, thanks to our ability to communicate, it went well — I was able to get my timing down pretty quickly.

As the sun moved into position, the light just got better and better. There were quite a few trains and we only had a few chances to try to get the shot while the sun was in the best position. But, thanks to our ability to communicate and the test shooting, we got the shot I wanted.

Afterward, I moved up closer to where Tsutomu was and tried to get another angle. But I think for the bunnyhop shot the corner inside the station was the best spot to shoot from.

Still, by moving up I got an idea for another shot to try shooting with my flash, so I guess I will be heading back in the near future!

Currently residing in Tokyo, I have lived in Japan for a total of over 15 years. For this time I have become deeply involved in a wide variety of action sports such as FMX, BMX street and flatland, snowboarding, breakdancing, etc. Through these photographic endeavours I have been able to work with many local and international organizations including Red Bull, G-Shock, Nikon, Sony, Reebok and others. I look forward to spreading the beauty of action sports through out Japan and the world though my photographs.