PHOTOS | From a Helicopter, Northern Kyushu Seems Just Like a Sea of Mud 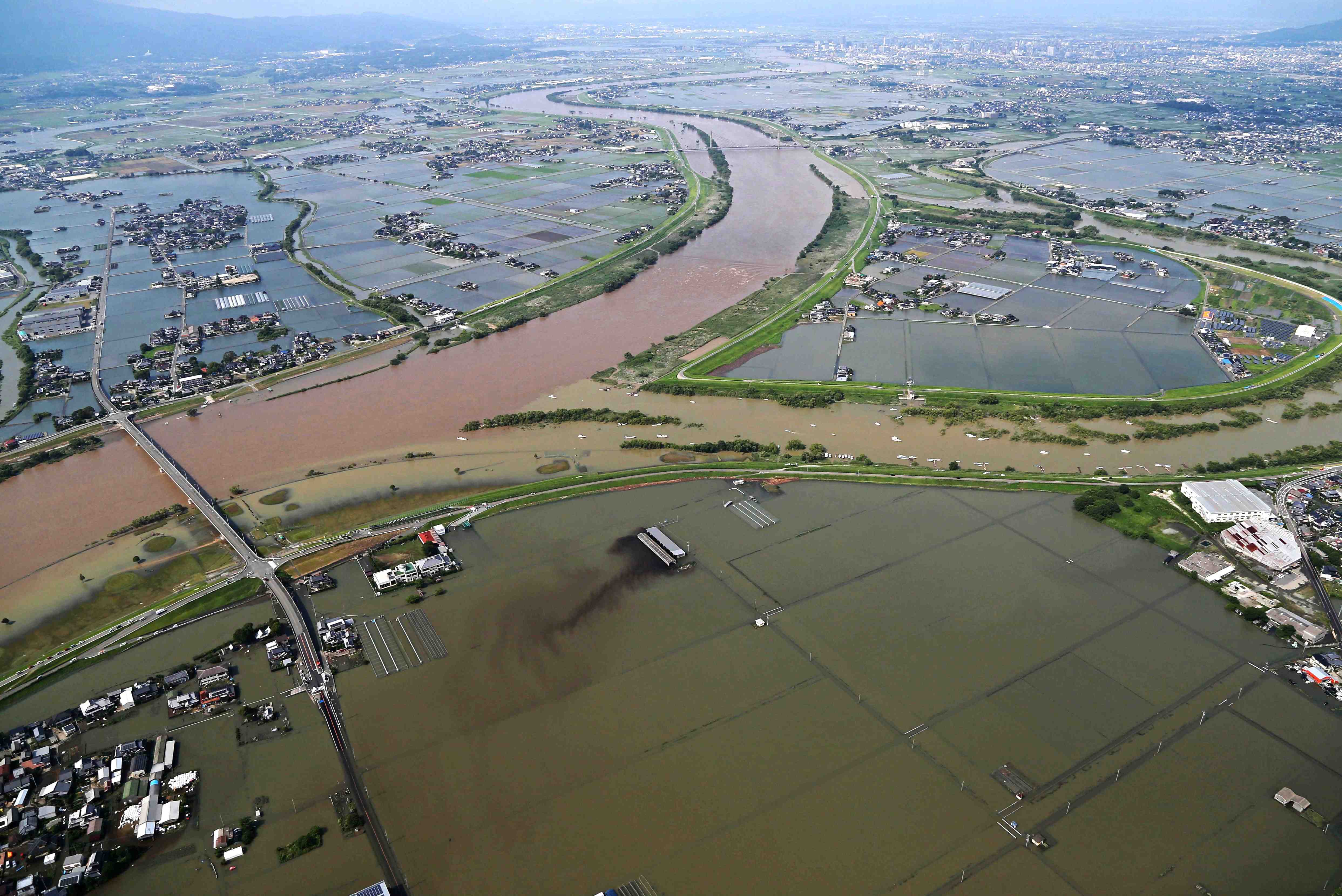 Looking down from a helicopter on the morning of Wednesday, July 8, following record  torrential rains, I surveyed the astonishing amount of damage done when local rivers overflowed their banks in the areas around Kurume City in Fukuoka prefecture and Hita City in Oita prefecture.

It was shocking to see how whole communities in North Kyushu had been swallowed up by turbid waters, which had expanded to resemble a brownish “lake.” 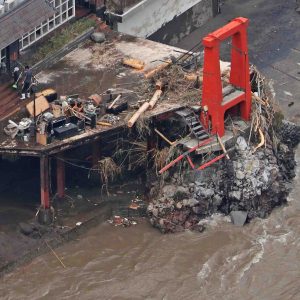 Entire structrures washed away by the heavy rains 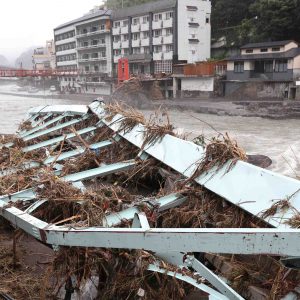 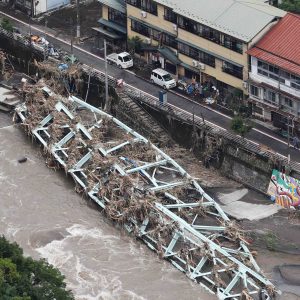 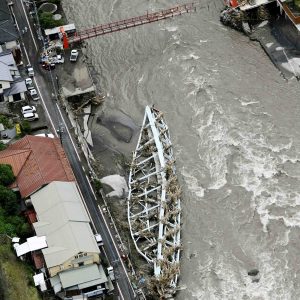 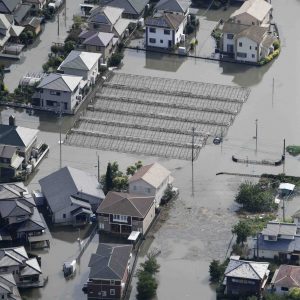 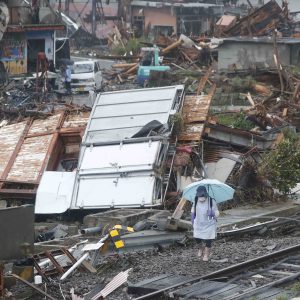 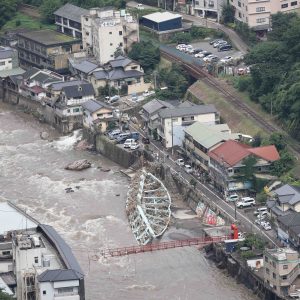 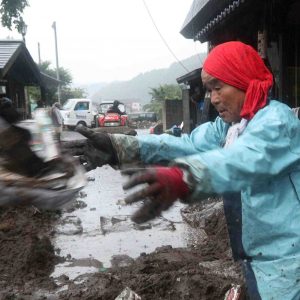 In the midst of havoc, rescue and recovery begins 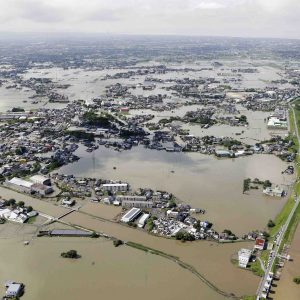 The mighty Chikugo River was obviously near peak capacity, even as it belched out huge amounts of reddish brown water into the Ariake Sea.

The rains had finally stopped and, during an interval when the sun shone, we flew towards the riverside community of Jojima-machi in Kurume City, which had been inundated. When we caught sight of it, the town appeared dyed a brownish hue.

This town is located on the lowlands through which the Chikugo River winds in a wide meandering course. As far as the eye could see, anything resembling a field had been submerged by an unbroken sheet of muddy water, so that I could not even make out the boundaries of the river’s tributa

ries and roads. It was just like one mammoth brownish lake, from the surface of which bright sunlight reflected sharply.

Dotted across the surface of the water were vinyl hothouses and clusters of houses, like small islands on the surface of the water. Although I saw some vehicle traffic on roads that had managed to avoid being submerged, there were hardly any residents visible outside. The giant cleanup of homes and fields would have to wait for another day. 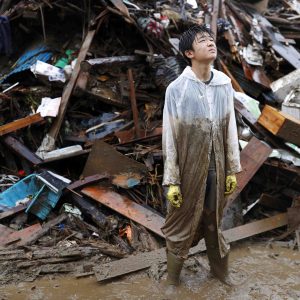 Rebuilding has to wait for another day 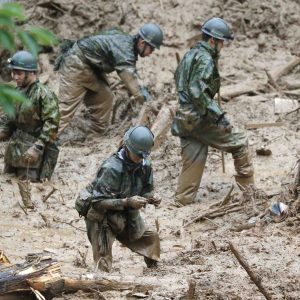 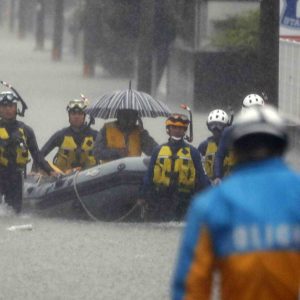 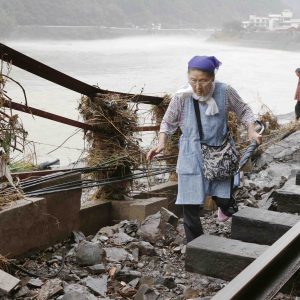 Devastation after heavy rains in Kyushu 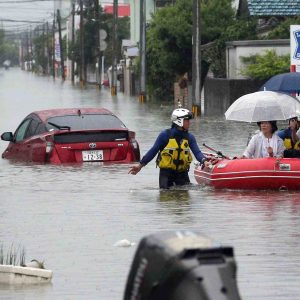 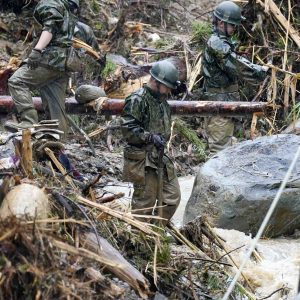 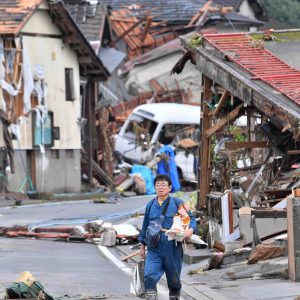 Where to begin with the recovery? 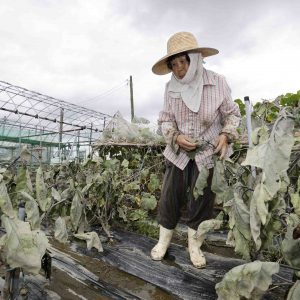 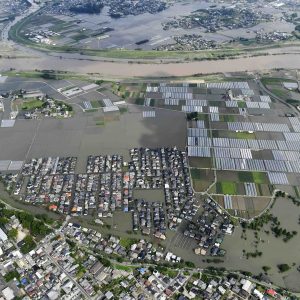 Heavy rains and flooding in Kyushu

Along the Kusu River

The Amagase Onsen is located in Amagase-machi in Hita City, Oita prefecture. Here, hotels and ryokans line both banks of the Kusu River, a tributary of the Chikugo River. We could now see a hot springs resort transformed beyond recognition by the inundation of mud, driftwood, and other rubble.

The light blue Shinamagase Bridge that had previously linked residents on both shores of the river had collapsed. It lay forlornly toppled over on its side on the riverbank, entangled with driftwood and other debris carried from upstream.

Farther upstream, the road had been cut by the raging turbid water. The huge amount of earth, sand, and debris piled up beside the river — where homes used to stand — was evidence of just how fierce the torrent had been.

We could see that with the river level having gone down, heavy machinery has begun to remove the mud. At the same time, staff at ryokan that had suffered damage, and other residents of the area, have begun the formidable task of cleanup.