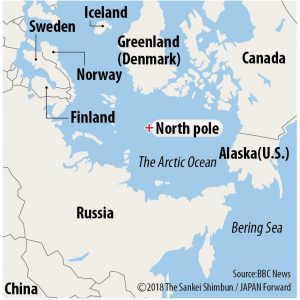 Mizuki Okada reports for The Sankei Shimbun and JAPAN Forward.

Five Chinese naval vessels sailed into United States territorial waters in the Bering Sea off Alaska in September 2015. The White House issued a statement saying no threatening force was confirmed, but China’s intent was not clear.

The incident occurred at the time China was heightening tensions with countries around the South China Sea by claiming sovereignty over disputed atolls and building man-made islands in the region. According to the Christian Science Monitor, China, by its Arctic naval operation, “sent a very clear message: that Beijing wants to become a polar great power.”

Russia is a Partner

Heather A. Conley, a senior vice president for Europe, Eurasia, and the Arctic for the Center for Strategic and International Studies, examined China’s recent behavior in the Arctic region in her report, “China’s Arctic Dream,” published this February.

She points out, “Clearly, China is using its economic might to improve diplomatic relations with Arctic nations.”

The report suggests China’s policy is having a strong impact on the Arctic’s largest country: “Russia is increasingly reliant on Chinese funding and technology [because of] the imposition of Western sanctions against Russia in 2014 following its annexation of Crimea and military intervention in Eastern Ukraine.”
It concludes that “Russia has been and continues to be the near-term ideal partner for China’s growing footprint in the Arctic.”

China is also strengthening relationships with Nordic countries. Conley writes, “There can be no doubt that China will continue to expand its physical presence as a major stakeholder in the Arctic.

The impact of China’s actions on the security environment in the Arctic are seen less urgently by countries in the affected region.

Last May 30, Gudlaugur Thor Thordarson, Minister for Foreign Affairs of the Arctic island country Iceland, told the Sankei Shimbun in an interview in Tokyo that “bilateral relationship between Iceland and China has been good and growing.” Iceland was the first country to conclude a free trade agreement with China in 2013.

On the issue of defense, he added, “We have not seen anything from China that threatens our security in the arctic.”

Thordarson’s comment about the absence of threat may represent Iceland’s perception. Lingering view of the China threat in the Arctic among the Western nations will, however, not disappear because of the superpower’s militarization and brute force to claim sovereignty in the South China Sea and the East China Sea.

The Philippines took the issue to the Permanent Court of Arbitration in the Hague in 2013, disputing China’s sovereignty claims and arguing that China’s actions in the South China Sea violated international law under the United Nations Convention on the Law of the Sea (UNCLOS).

The international tribunal concluded in 2016 that the “nine-dash line,” which China adopted unilaterally and extends hundreds of miles beyond China into to the South China Sea, has no legal basis. The tribunal’s ruling repudiated China’s position on virtually every point.

China, however, was undaunted. Rejecting the tribunal’s authority on the matter, it simply pushed forward with its construction of artificial islands and installation of weapons systems in the South China Sea. He Lei, deputy president of China’s People’s Liberation Army’s Academy of Military Science, further argued China’s actions are within its rights of sovereignty and are allowed under international law. His point was, it is a fait accompli.

The same could occur in the Arctic in the future. The U.S.-led North Atlantic Treaty Organization reviewed the security of the Arctic Circle in 2017 with this concern in mind. In its October 2017 report on the region, NATO pointedly warns its members about Beijing’s intentions.

It said, “Beijing’s assertive rhetoric and actions with regard to sovereignty issues in the South China Sea and East China Sea is contesting UNCLOS—which regulates interstate relations in the Arctic.”

It also cautions, “It would be prudent for NATO to engage in an effort coordinated among member states to improve its situational awareness in the High North.”