Beware the Slyness of North Korea 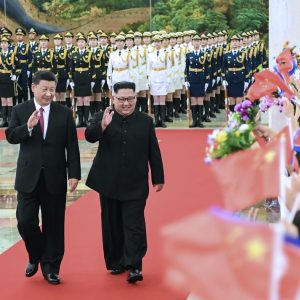 The joint document says North Korea reaffirms “the April 27, 2018, Panmunjom Declaration” and “commits to work toward complete denuclearization of the Korean Peninsula.”

The document, however, failed to include the words “complete, verifiable, irreversible denuclearization,” or CVID, that the United States had long wanted the North to accept. This represents a significant concession on the part of Washington to Pyongyang.

Furthermore, Mr. Trump said before the summit that he hoped for an end to the Korean War, but the joint statement says only that the United States and North Korea “will join their efforts to build a lasting and stable peace regime on the Korean Peninsula.” From now on, initiatives to turn the war's armistice into a peace treaty between the United States and North Korea can be expected to gain momentum.

Such an accord has been reached because Kim Jong Un succeeded in adroitly manipulating Mr. Trump, who was intent on earning his place in history by bringing the Korean War to an end.

Under the agreement, diplomatic negotiations will be undertaken between the United States and North Korea for the DPRK’s “complete denuclearization of the Korean Peninsula.” It can be expected that the process will proceed in the form of “denuclearization by stages,” as called for by North Korea.

There remains a possibility that Mr. Trump could agree with the North if Kim Jong Un comes up with a proposal for completely suspending the North’s program for the development of intercontinental ballistic missiles capable of reaching the United States while producing no additional nuclear weapons. This is because such commitments would get rid of the North Korean threat in the eyes of the United States.

The North, however, might not be expected to abandon nuclear weapons or short- and intermediate-range ballistic missiles already in its arsenal. The result would be that Japan could continue to be exposed to the nuclear missile menace of North Korea. The foundation and future of the Japan-U.S. alliance would be severely threatened, should the United States connive such a situation.

Japan, on its part, must continue to ramp up diplomatic efforts to ensure Mr. Trump understands that threats involving North Korea’s nuclear arsenal are different for Japan from those for the United States when seen from a geopolitical viewpoint.

Regarding the issue of the abductions by North Korean agents of Japanese citizens, Mr. Trump, in a news conference following the ceremony for marking the signing of the joint statement, stated: “I brought it up [in the summit meeting], absolutely, and they (North Koreans) are going to be working on that.”

He went on to say Japanese Prime Minister Shinzo Abe has made resolving the abductions a top priority of his administration, adding, “We (Donald Trump and Kim Jong Un) didn’t put it down in the document, but it will be worked out,” referring to the joint statement.

That Mr. Trump conveyed the abduction issue directly to Kim is clearly beneficial to Japan’s national interests. Japan, nevertheless, must never let its guard down against the slyness of North Korea.

The possibility cannot be ruled out that Pyongyang is taking advantage of Mr. Trump’s reference to the decades-old abduction issue in the Singapore summit. Although the North did pledge in 2014 to reinvestigate the abductions, it has yet to make any findings public about the matter. There is a possibility that Kim Jong Un, when he has another summit with Mr. Trump, could hand over what the North might call its “letter of reply” on the abduction issue —the contents of which would presumably be far from being acceptable to Japan—and ask that Mr. Trump forward it to Prime Minister Abe. Mr. Abe, for his part, is fully aware of this risk.

Therefore, on June 12, shortly after the end of the Trump-Kim Singapore meeting, Mr. Abe told reporters at the Prime Minister's Office, “I highly praise and appreciate President Trump for mentioning the issue of abductions to Kim.”

He went on to reiterate that Japan is “determined to make all-out efforts hereafter in addressing the issue.” Mr. Abe then noted, “This is a problem that must be resolved through direct negotiations between Japan and North Korea.”

As The Sankei Shimbun editor-in-chief Masato Inui put it:

Pieces of the two-man grandiose political theater of Trump and Kim will have a long road to travel, with the subsequent stages likely to take place in Pyongyang and Washington. The problem, however, is that the theater’s viewing fees may be jacked up tremendously.

Inui pointed out correctly in the June 13 Tokyo edition of The Sankei Shimbun:

Although Pyongyang has committed to “complete denuclearization of the Korean Peninsula,” we should take to heart that it occurs too often that a promise from the North exists only for the sake of being broken. Above all, even a glimpse of the possibility of resolving the abductions of Japanese nationals has been left unforeseen so far. If this situation remains unchanged, Japan could be stuck with the price for maintaining the Kim Jong Un regime.

I agree with Inui that, as things stand now, Japan would be bound to be left worse off.

Both the United States and North Korea have been engaged in a sort of imperialistic diplomatic approach, placing top priority on maximizing the benefits of their own countries, even at the expense of other countries. Unless Japan protests, the two parties will proceed unchecked, as they now are.

There are U.S. politicians, diplomats, and military officials who fear Mr. Trump’s “deal diplomacy” would adversely affect the Japan-U.S. alliance. Japan, consequently, must do its best to have them on its side, including undertaking lobbying activities conducive to Japan’s interests.

In this sense, the roles to be played by diplomats in the Japanese embassy in Washington, DC, beginning with Ambassador Shinsuke Sugiyama, are immensely weighty.