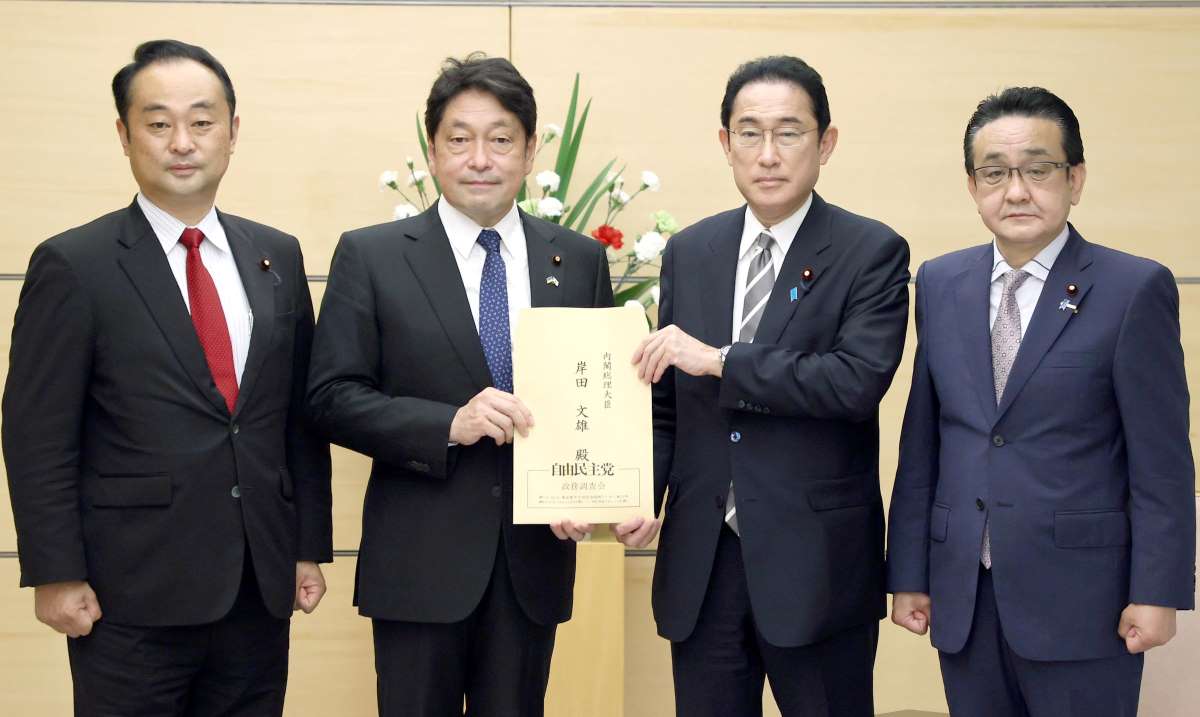 Prime Minister Fumio Kishida receives a proposal from Itsunori Onodera, chairman of the LDP Security Investigation Committee, to change the name of the “enemy base strike capability” to prevent missile launches in the opponent's territory, to "counterattack capability" and to proceed with enabling it.

The Sankei Shimbun and Fuji News Network (FNN) jointly conducted a nationwide weekend opinion poll on May 21 and 22. The results reveal that 64.7% of respondents favor Japan acquiring enemy base strike capabilities, which is under consideration by the government.

Regarding the ruling Liberal Democratic Party’s proposal for boosting Japan’s defense spending, 15.1% replied that they are in favor of increasing the defense budget to “a level equivalent to 2% or more of the gross domestic product (GDP). Another 46.9% said they favor increasing defense outlays, but that it “does not have to be 2% or more of the GDP.” Taken together, the survey showed that more than 60% would like to see some form of increase in the country’s defense expenditures.


Support Rate for Kishida Cabinet at 68.9%

The survey showed a 68.9% approval rating for the administration of Prime Minister Fumio Kishida, up 3.0% from the previous Sankei-FNN poll on April 16-17. This is the administration’s highest rating since taking office in October 2021.

The government’s approval rating has continued to hold at around the 60% mark for 8 months straight since the start of the Kishida government.  Factors identified as contributing to its high evaluation are the handling of the COVID-19 crisis and the government’s responses to the Ukraine crisis, both of which surpassed the 60% mark in the latest poll.

Asked whether they thought Japan should implement sanctions against Russia even if it adversely impacts the national economy and people’s lives, 73.6% of respondents said the government should do so. In comparison, 20.0% responded that it is not necessary to impose sanctions.

Expectations were also measured for the government of new South Korean President Yoon Suk-yeol, who is on record as pledging to work on improving Seoul’s relations with Tokyo. Combined responses of those saying they had “high hopes” or “hopes to some extent” accounted for 67.4% of responses in the Sankei-FNN survey.

Another question asked for views on the government requests for people to wear face masks to lessen COVID-19 cases. Relaxing mask requirements was supported by 50.7% of respondents, with 44.1% saying they should not be relaxed.

Concerning the recent trend in rising energy costs, especially oil, 47% of all respondents rated the  government measures with at least some level of positive appreciation.

Respondents were asked which political party they plan to vote for in the ballot for proportional representation in the upcoming summer 2022 House of Councilors election.  Those naming the LDP topped the list at 39.2%. The main opposition Constitutional Democratic Party of Japan came in second, with 7.1%.

Nippon Ishin no Kai (Japan Innovation Party) was selected by 5.7% of respondents, while the LDP’s ruling coalition partner Komeito had 3.2%. Following behind were the Democratic Party for the People with 2.0%, and the Japanese Communist Party with 3.2%, according to the survey findings.

Replies of either “I don’t know” or “I don’t want to reply” accounted for 35.4% of those surveyed.

Questions in the poll were re-asked when a reply about the support or non-support for the Cabinet was equivocal. In such instances, responses were obtained by asking respondents once again for their evaluation of the Kishida Cabinet, with the reply options expanded to include “somewhat in favor of” or “somewhat oppose” the Cabinet.

The survey was conducted over the phone via random-digit dialing (RDD), a sampling method for generating phone numbers in a random way according to gender and age bracket in the respective survey areas, until the target number of responses was reached. The ratio of fixed-line phones to mobile phones in the poll was 4 to 6.

A sample of 1,017 men and women aged 18 or older from across the country participated in the survey.