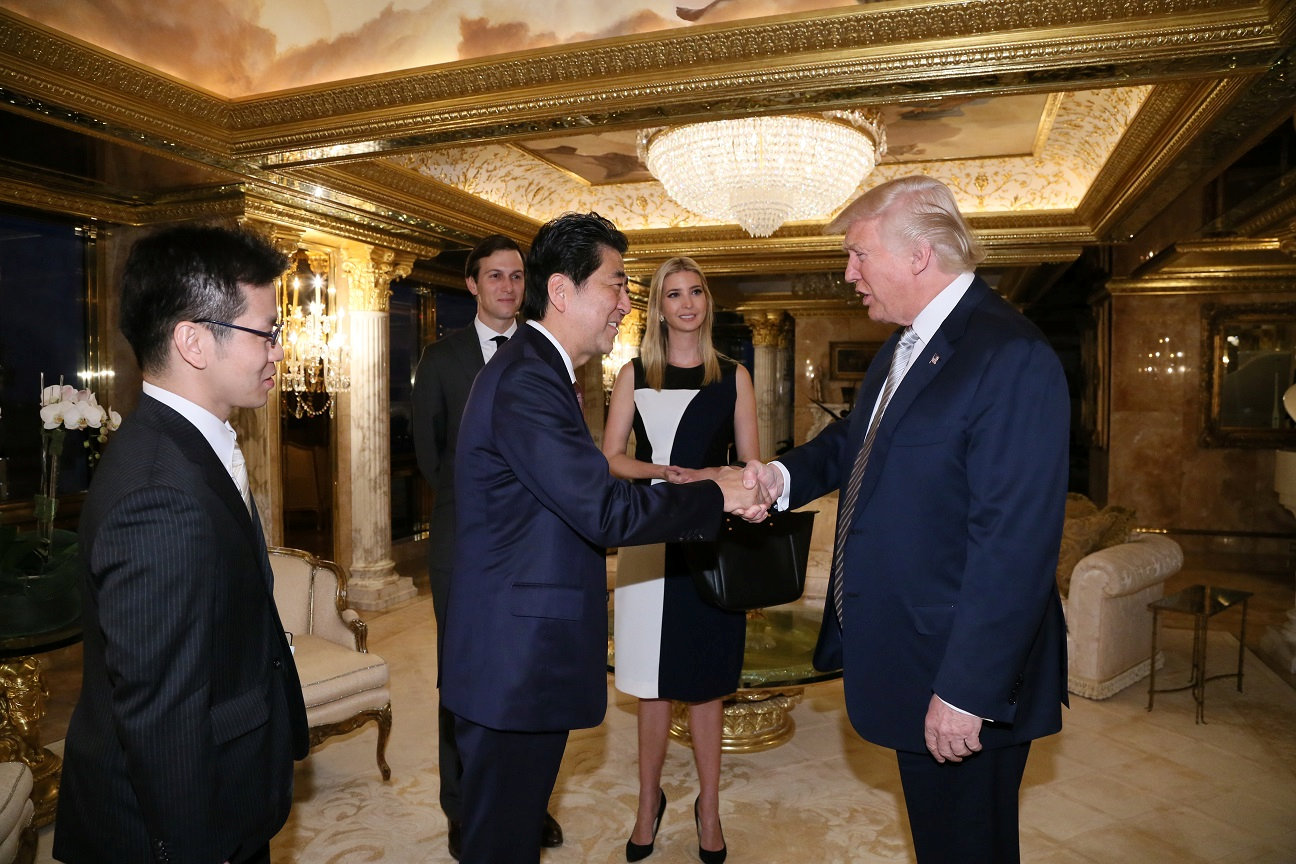 Prime Minister Shinzo Abe met with U.S. President-elect Donald Trump in New York on the evening of Thursday, November 17 for talks lasting an hour and a half. It is a rare event for a Japanese prime minister to meet with a president-elect prior to inauguration - Prime Minister Abe was also the first head of state to meet with Mr. Trump after his campaign victory.

Speaking to reporters after the meeting, the prime minister said, “We were able to talk in a very warm and cordial atmosphere,” and he stressed, “Our conversation has convinced me that we will be able to build a relationship of trust.”

He did not go into specifics, saying only, “this was an informal meeting,” but did assert that he had “communicated his basic thoughts,” which, it is surmised, related to Donald Trump’s campaign rhetoric demanding Japan pay a greater share of the costs for the U.S. military presence in Japan, and to the Trans Pacific Partnership free trade agreement (TPP), which Mr. Trump has vowed to pull the U.S. out of as soon as he is sworn into office. On the morning of November 18, the prime minister departed for Peru to attend the Asia-Pacific Economic Cooperation (APEC) Summit.

The Trump Tower, the location of their meeting, is a golden edifice glittering in the midst of the high-rise buildings of New York’s Manhattan. The president-elect and Prime Minister Shinzo Abe met for a meeting that extended for twice the originally scheduled time and that attracted the keen attention of China, Russia, and much of the rest of the world.

After the meeting, Prime Minister Abe said confidently, “Our talks went exceptionally well. I could feel it was going to be OK. He is an attentive listener and I think we will get along well." The topics of discussion have not been made public, but informed sources say that Donald Trump listened attentively and occasionally nodded when Prime Minister Abe made impassioned pleas for his understanding of Japan’s stance on the Japan-U.S. security alliance and TPP. The prime minister continued, “He was completely different from the (aggressive) way he was during the campaign. I am convinced we will be able to build a relationship of trust (in both security and economics).”

He probably found it easier than his initial encounters with President Obama who was unable to hide his initial wariness of the prime minister. In contrast, the first thing Donald Trump did upon Prime Minister Abe’s arrival was to introduce his daughter Ivanka and son-in-law Jared Kushner, the latter of whom played a key role in the arrangements for the meeting and has connections to people acquainted with Kenichiro Sasae, Japan’s ambassador to the United States.

Japanese government sources said that, “The fact that Mr. Trump introduced people he trusts to the prime minister is a good sign.”

First impressions are critical in meetings between heads of state. When Prime Minister Junichiro Koizumi met with President George W. Bush in June 2001 for their first summit meeting, a congenial conversation over lunch about the movie High Noon helped to cement their relationship.

The implications are not trivial. A good relationship between the Japan and U.S. leaders facilitates maintaining and furthering the Japan-U.S. alliance, lets China and North Korea know that there is no power vacuum, and contributes to the stability and prosperity of the region.

The first face-to-face meeting may have gone well and may have shown the world that Japan and the United States still enjoy a strong bond, but it is too soon to be optimistic. Mr. Trump does not hesitate to go back on his word. Should he decide things are not in line with his “America first” principle, his attitude toward Japan could change very suddenly and drastically. Given this possibility, Japan will need to be more assertive when it comes to matters of security and economics. More than anything, an autonomous stance and clear resolve are what will draw Mr. Trump closer.

Makiko Takita is a political reporter with the  Sankei Shimbun