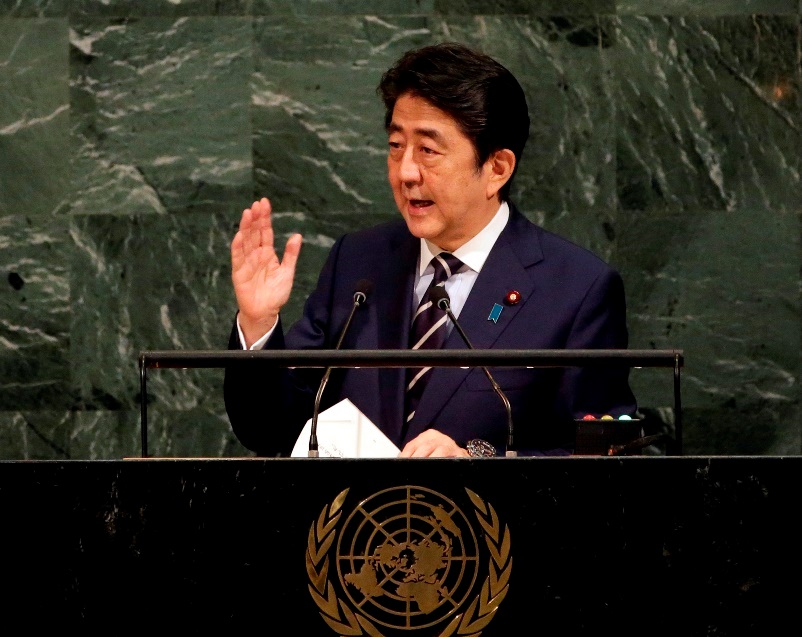 Japanese Prime Minister Shinzo Abe said on Wednesday, September 20, that countries need to unite to enforce sanctions and apply pressure on North Korea to abandon its nuclear and missile programs.

Here is the full text of the speech he delivered at the 72nd Session of the United Nations General Assembly in New York. 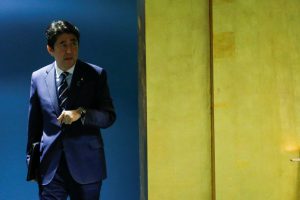 Today, I had intended first of all to tell you of the sincerity with which Japan is implementing the SDGs. I also had hoped to introduce to you the innovative ways by which we have been fostering public awareness within Japan towards those goals.

I wanted to tell you why the Women Entrepreneurs Finance Initiative, or “We-Fi,” is important to me personally as well as to the Government of Japan.

I have been saying we will make universal health coverage part of the “Japan brand.” We will hold a major conference this December in Tokyo taking up UHC as the theme.

The list of things I would have liked to raise here is long indeed—our contributions towards the rule of law; our determination to undertake the Paris Agreement in a steadfast manner; our policy of addressing global infrastructure demand through quality investments.

Moreover, what Japan wants to safeguard in every respect is the free, liberal, open international order and multilateral frameworks.

The world certainly holds high expectations towards the UN as the flag-bearer upholding these. That is exactly why the Security Council should be reformed without delay, in response to the demands of the times.

Japan will strive together with its friends to achieve these reforms. I had intended to state that Japan’s abiding determination is to play an active role for world peace as a permanent member of the Security Council.

However, I have no choice but to focus my remarks on a single issue, that of North Korea.

North Korea conducted a nuclear test on September the 3rd. Whether or not it was a hydrogen bomb test, its scale far exceeded that of previous tests.

Both before and after that, on August 29, and again on September 15 before the ink on Resolution 2375, passed by the Security Council to impose sanctions on North Korea, was even dry, North Korea launched missiles.

Both of these were launched to fly over Japan and make a display of their cruising range.

The gravity of this threat is unprecedented. It is indisputably a matter of urgency.

North Korea is attempting to dismiss with a smirk the efforts towards disarmament we have assiduously undertaken over the years.

The non-proliferation regime is about to suffer a serious blow from its most confident disrupter ever.

This recent crisis is of an altogether different dimension qualitatively than those we have eluded every time some dictator has attempted to acquire weapons of mass destruction.

North Korea’s nuclear weapons either already are, or are on the verge of becoming, hydrogen bombs.

Their means of delivery will sooner or later be ICBMs.

Over the more than 20 years since the end of the Cold War, where and when else, and to what dictators, have we allowed such self-indulgence? As it turns out, it is only towards North Korea that this has been allowed.

That is the reality we find before us.

And, it was absolutely not a lack of dialogue that gave rise to this situation. 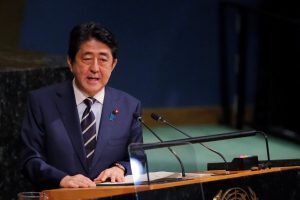 Dialogue dissuaded North Korea from pursuing its nuclear ambitions. Dialogue has afforded many of us the relief that the world had been saved from a crisis. Believing thus, many of us have felt relieved, well, not just once, but twice.

At the time, the threat that North Korea imposed amounted to little more than openly displaying its withdrawal from the IAEA and other inspection regimes.

However, tensions were felt by those of us who surmised the intent of that.

After many twists and turns, in October 1994, what is known as the “Agreed Framework” was realized between the US and North Korea.

Under the framework, North Korea would be made to abandon its nuclear plans. In exchange, we would provide incentives to North Korea.

Towards that end, Japan, the US, and the ROK formed the Korean Peninsula Energy Development Organization, or “KEDO,” in March the following year.

Taking KEDO as the implementing agent, we pledged to build and hand over two light-water reactors (LWRs) to North Korea and also provide 500 thousand tons of heavy fuel oil annually as a stopgap measure for its energy demand.

This was all carried out accordingly. However, as time went by, it came to be known that North Korea had been continuing steadily with its uranium enrichment.

From the start, North Korea had never intended to abandon its nuclear ambitions. This had become readily apparent to all.

After 2002, seven years after it was founded, KEDO suspended its operations.

During that period, it can be said that North Korea defrauded the U.S., the ROK, and Japan of assistance.

North Korea betrayed the good faith of all those KEDO members.

As one of the organization’s founding members, Japan had pledged to give a non-interest loan to KEDO and had fulfilled roughly 40% of that.

The pledged amount was US$1 billion, with about $400 million fulfilled.

The second crisis occurred in 2002 when KEDO suspended its operations and North Korea, saying it would end the freeze on its nuclear-related facilities, expelled IAEA inspectors.

The concern was again that North Korea was continuing its uranium enrichment. And again we chose the path of defusing the situation through dialogue.

North Korea, China, and Russia joined the three founding members of KEDO, Japan, the US, and the ROK, to launch the Six-Party Talks. That was in August 2003.

Subsequently, after two years of twists and turns, through the summer of 2005 into the fall, the Six Parties once reached an agreement, resulting in the release of a joint statement.

North Korea committed to abandoning all nuclear weapons and existing nuclear programs and returning to the NPT and to IAEA safeguards.

Moreover, two years after that, in February 2007, an agreement was concluded regarding what each of the Six Parties should do towards implementing the joint statement.

A group of IAEA inspectors that had entered North Korea verified the shutdown of the nuclear-related facilities in Yongbyon, and in return, North Korea received heavy fuel oil.

The series of events made people think that tenaciously continuing dialogue had this time finally caused North Korea to change its actions.

But what actually happened?

In February 2005, while the Six-Party Talks were underway, North Korea declared unilaterally that it was already in possession of nuclear weapons. Moreover, in October 2006, it openly carried out its first nuclear test.

Its second nuclear test was in 2009. Ultimately that same year, North Korea announced its withdrawal from the Six-Party Talks, stating it will “never again take part in such talks.”

Furthermore, around this time it was firing ballistic missiles on a repeated basis.

Over the course of more than a decade beginning in 1994, the international community continued its efforts towards dialogue with North Korea with great perseverance, first through the Agreed Framework, and later through the Six-Party Talks.

However, what we had to learn is that during the time this dialogue continued, North Korea had no intention whatsoever of abandoning its nuclear or missile development.

For North Korea, dialogue was instead the best means of deceiving us and buying time.

More than anything else, the following fact demonstrates that.

In 1994, North Korea had no nuclear weapons and even its ballistic missile technology was far from mature. Yet it is now working to attain hydrogen bombs and ICBMs.

Again and again, attempts to resolve issues through dialogue have all come to naught.

In what hope of success are we now repeating the very same failure a third time?

We must make North Korea abandon all nuclear and ballistic missile programs in a complete, verifiable, and irreversible manner.

What is needed to do that is not dialogue, but pressure.

On November 15, already 40 years will have passed since a 13-year-old girl named Megumi Yokota was abducted by North Korea.

Megumi and many other Japanese remain abducted in North Korea even to this day.

I will continue to do all possible efforts so they can set foot on Japan’s soil as soon as possible, until the day when they will finally be in the arms of their parents, and their family members.

Japan will face up to North Korea’s nuclear and missile threat through the Japan-US Alliance and through Japan, the US and the ROK acting in unity.

We consistently support the stance of the United States: that “all options are on the table.”

Also, I appreciate the unanimous adoption by the Security Council of UNSC Resolution 2375 on September 11, which imposes strict sanctions against North Korea.

That clarified our intention to further intensify pressure on North Korea in order to force it to undertake a fundamental change in its path forward.

But I must make an appeal to you.

North Korea has already demonstrated its disregard of the resolution by launching yet another missile.

The resolution is nothing more than the beginning.

We must prevent the goods, funds, people, and technology necessary for nuclear and missile development from heading to North Korea.

We must make North Korea comply fully with the repeated resolutions.

We must ensure the strict and full implementation of the series of Security Council resolutions by all UN member nations.

What is necessary is action.

Whether or not we can put an end to the provocations by North Korea is dependent upon the solidarity of the international community.

There is not much time left. 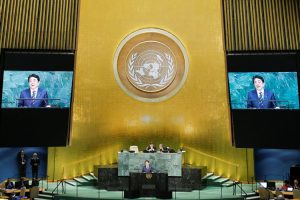 North Korea is in a truly fortunate location, adjoining the growth region of Asia and the Pacific. It has an industrious labor force as well as underground resources.

If it were to make use of those, there could be a path towards North Korea dramatically growing its economy and improving public welfare.

That is where North Korea’s bright future lies.

By failing to resolve the abduction, nuclear weapons and missiles issues, and by becoming a threat to all humanity, there is absolutely no future that North Korea can open up for itself.

In order to change North Korea’s policies, we must strengthen our unity.

Thank you very much.