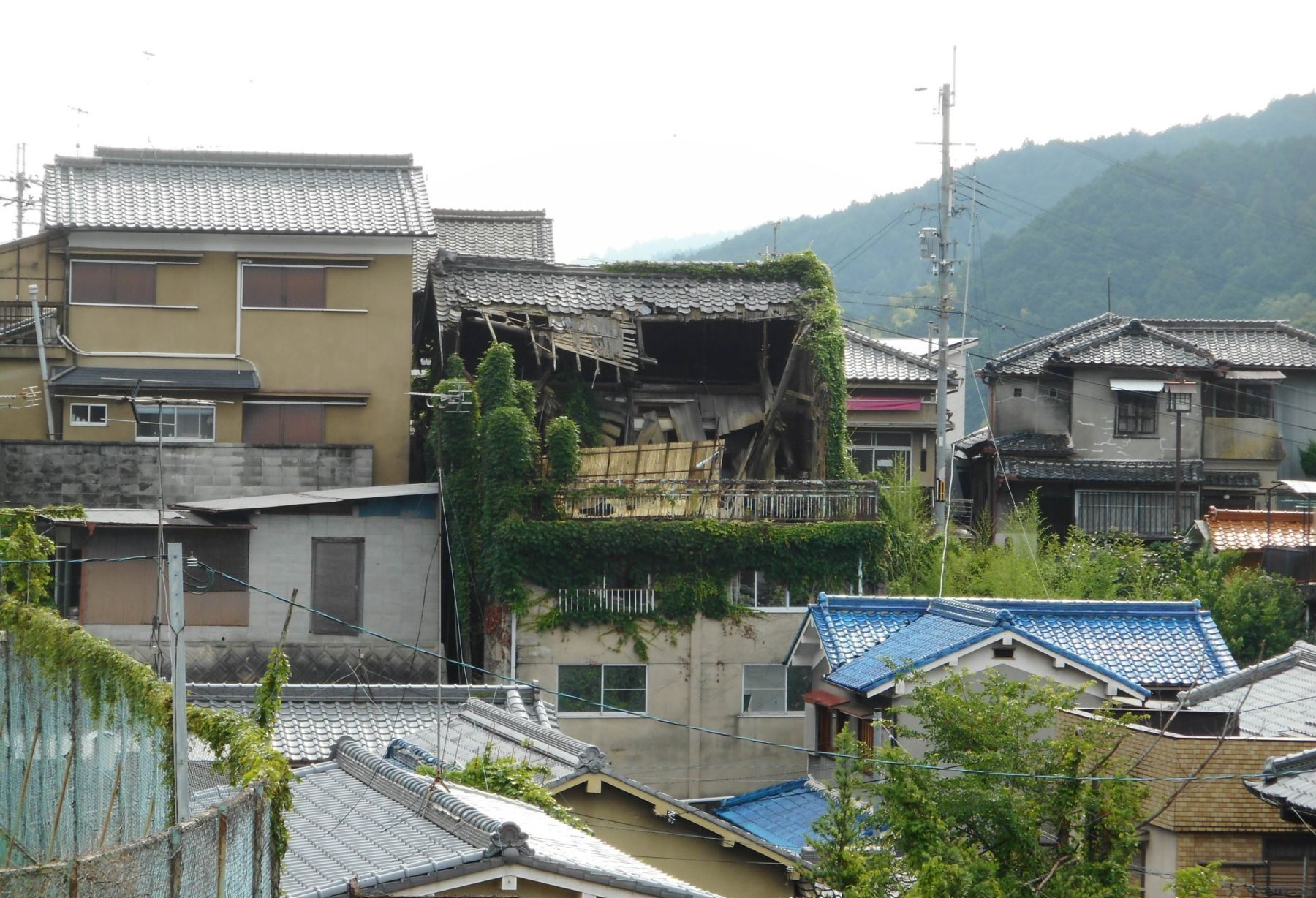 I recently completed a 12-part “Akiya Navigator” course in Hyogo Prefecture, where I have resided most of the past 30-plus years.

Akiya, as readers may know, refers to vacant or abandoned houses that are not being utilized due to the sole owner’s death or incapacitation, inheritance-rejection, absentee-landlordism, or other similar reasons. Unfortunately, in Japan, there are many such houses.

When I first arrived in Japan in 1990, just after the start of the Heisei Era, it was the heyday of the Bubble Economy. Now, decades later, Japan is dealing with the effects of over-building and over-development.

Had population growthーwhich peaked in October 2010 at 128,057,352 peopleーand the economy kept pace, the problems would not be as severe. But the past three decades have been a time of avoiding reality and postponing important decisions at all levels of government.

As such, approximately 1 in 7 houses are empty now on average around the country. This percentage varies from region to region, with some places as high as more than 1 in 4. That latter figure appears in the April 2019 study known as “Dwellings and Land Statistics Survey (Jūtaku-Tochi Tōkei Chōsa),” which is published every five years. It is certainly likely to rise at the rate things are going.

When we talk about the ageing of society, we also need to be aware of the ageing of infrastructure, including houses, public (and private) buildings, airports, ports, parks, etc. In other words, it is not just bridges and roads that need upkeep, but also schools, hospitals, prefectural, city, town, and village structures, etc., as well.

And, of course, houses, which is why I decided to take the course.

I was informed about the course after meeting with officials in charge of the akiya problem in my city government, after being introduced to them by our young mayor. I am writing a book about regional development—of which the akiya problem is an important component—and wanted to speak with these officials about their thoughts on the problem, possible solutions, and current policies.

Five years ago, after returning to Kansai after seven years in Okinawa, I was told by a real estate agent that there had been an increase in the number of vacant houses in our neighborhood. He estimated there were approximately 130. I subsequently learned there are about 4,000 individual homes in our neighborhood, not including apartments and other dwellings. While this percentage of 3.25% means we are well below the national average of about 14% of vacant homes, it is still worrisome because of the number of elderly in the area explained below.

Subsequently, in my daily walks I kept a lookout for houses that appeared empty. I learned from the city that a previous survey conducted by the neighborhood association showed 95 houses to be vacant, while the city’s estimate was almost double that. They admitted they did not have an accurate count and thus needed the help of volunteers such as those the course produced.

This, they said, is true of many other municipalities, and thus this means that the national estimates are also not accurate, but simply approximate. So, while the estimates may be high, they may actually be lower than realized and thus the situation worse.

These officials were almost appealing for help with their eyes when they explained this. I decided to apply for the course, which began in October and finished in February.

The non-profit organization (NPO) that organized the course is called the Hyōgo Akiya Sōdan Sentaa, or Hyogo Consultation Center for Empty and Abandoned Houses. It was founded in 2015 and includes professional real estate agents, notaries, tax specialists, home-reformers, handymen (and women), and others concerned with restoring neighborhoods. It is located in Takarazuka City, next to Kawanishi City where I live.

This was the second time the program was held, the first being in Fiscal Year 2018. It has received the support of the Ministry of Land, Infrastructure, Transport and Tourism (MLIT), and has been designated a model activity to increase the number of specialists involved with the issue of vacant and abandoned houses.

There were concerns about its being held amid COVID, but the curriculum was quickly adapted to an online format (pre recorded videos of presentations with the slides provided later, as opposed to live online lectures). For busy people, this was actually helpful as we could watch the videos and read the notes at our own leisure, but we missed the benefits of the give-and-take of in-person interactions, questions, and discussions with our classmates.

The community I have lived in since 2000 is considered a “new town,” even though it was developed in the early 1970s as a “bed town” for those working in Osaka, such as my father-in-law, a transplant from Kochi Prefecture, who lives in the family home with his wife of more than 55 years. My wife and her siblings were all raised in the neighborhood. Fortunately, the siblings remain close by and we gather at least once a month with our respective families.

My wife’s parent’s generation is now quite senior, and several have either passed away or had to resettle closer to other family members or senior citizens homes. As most of their children no longer live in the area, the disposal of the houses is increasingly an issue of concern to local communities, a problem known as akiya yobigun (literally, a reserve army of vacant houses, or houses that have the potential to become vacant in the future).

Interestingly, this is not just a problem for the countryside but affects every community, including many neighborhoods in Tokyo. One reporter friend, who is from Chiba, describes how an outer ring of depopulated areas is gradually closing in on Tokyo. In fact, there are already many houses, stores, and buildings vacant in the metropolitan area.

Obviously, however, the problem is more serious the farther away you go from Tokyo. Because of this, some municipal governments, such as Kawanishi, are proactively trying to deal with the issue.

However, it requires average citizens to be involved as well. Eventually, each family or person will have to face the same problem—what to do with the family property or your own house, or shop. The aforementioned NPO notes that it is vital to “avoid increasing the number of vacant houses.”

Vacant homes lead to not only a decline in property value and unsightliness, but also to problems of unknown individuals entering the property and stray animals taking them over, creating a sanitary problem. Unkept properties also create frictions with adjoining neighbors.

In the wake of COVID-19, it is increasingly difficult for families to maintain the vacant properties they may own due to travel restrictions and concerns about getting sick. Compounding the problem is that most of the homeowners themselves may be elderly.

Assisting those who have moved away but wish to maintain the family home is one way neighbors can help. Houses in humid Japan need to be aired out regularly. Furthermore, occasionally visiting the house, turning on the lights, airing it out, etc., will give the appearance of it being lived in and thus discourage potential burglars.

Learning about the problem is the first step in any case. Fortunately, the course also discusses how to utilize vacant homes and similar properties for business or other opportunities, and how taxes work with regard to property value.

Since classes are being held remotely, perhaps the NPO can open it up to anyone in the country now, rather than those just in the contracting community. Or perhaps your own prefecture has a similar service.

At the minimum, it is imperative that people learn about how to handle akiya that may be in their possession ahead of disposing of one’s property prior to death or incapacitation, so as not impose a burden on family, friends, neighbors, or the local government.

As the NPO stresses, it is important not to add to the problem.


Our thanks go to NPO Hyogo Akiya Soudan Sentaa for the resources they provided and for opening our eyes to the depth of the issue. You can learn more about the problem, solutions and available seminars from your local government, or by contacting a nationwide organization such NPO Hojin Akiya Kuchikanri Senta- (NPO Vacant Home-Vacant Lot Management Center) (in Japanese). Phone: 0120336-366.

Dr. Eldridge is a former associate professor of International Public Policy at Osaka University and a long-term resident in Japan based in Kansai. His forthcoming book (in Japanese) is Regional Development and Japan’s Rebirth.