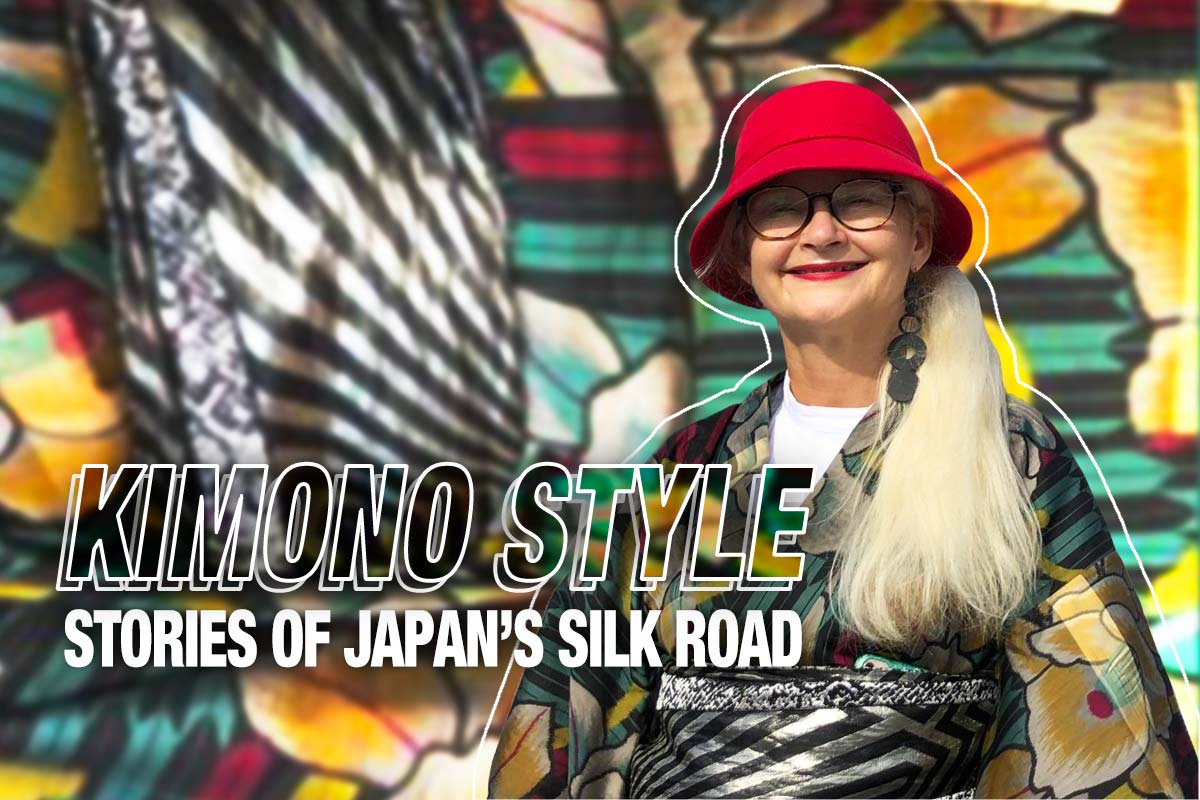 I don’t know about you, but if someone says “Silk Road” to me, I have an image of camels crossing the desert somewhere in the Middle East, carrying silks and spices. But the image is vague, and rather like the undefined space on many a Christmas card with three kings.

Japan is the farthest east end of the silk road.

Ancient evidence of the silk road is found in textile samples in the collection from the Shosoin in Nara, which testify to influences from other countries from China and beyond from before the Heian period. I went on three research trips with Midori Fujii of Kawagoe Kimono Walk NPO to explore parts of the silk road within the Kanto area. These routes were important to Japan from the end of the Edo period through the Meiji period.

We specifically looked at the relationships between three cities which were closely connected through silk: Maebashi, Kawagoe, and Yokohama.

Although silk had been made in Japan for over 2,000 years, it became of great significance at the end of the Edo period through the Meiji period because it was Japan’s major export product. The revenue from the international sales of silk enabled Japan to turn itself into an industrialized nation.

RELATED: BOOK REVIEW | ‘The Merchant’s Tale: Yokohama and the Transformation of Japan’ by Simon Partner

Gunma Prefecture was a major silk-producing area. Maebashi City was at the heart of this industry. The Matsudaira clan had moved their headquarters to Kawagoe for about 100 years, after devastating fires and continued flooding, but towards the end of the Edo period they returned to Maebashi.

The Factories of Japan’s Silk Road

Fukazawa Yuzo, a high-ranking samurai, and Hayami Kenso, another Kawagoe man working for Matsudaira, went to Maebashi. Hayami had set up a silk business in Yokohama for the clan and learned about silk technology from Casper Muller of Switzerland.

Influenced by Muller, Hayami set up the first silk-reeling factory in Japan, on a roadside in Maebashi, with three wooden reeling machines. Fukazawa was also convinced that Japan should make western style silk mills and set up a large factory. He converted to Russian orthodoxy, and the site of the Russian orthodox church in Maebashi was once the site of Fukazawa’s factory.

The silk industry was associated with new technology and ideas from outside Japan, and many small churches were set up. Many still remain in Maebashi. They were associated with the silk factories and reflect that the Japanese were tired of, and had lost faith in, the bankrupt old order of things.

In 1872, probably under the influence of Eiji Shibusawa, a political reformer who had visited Lyon, the Tomioka Silk Filature was set up. It was the largest in the world and would require a lot of new technologies, from making an iron foundry, to the production of bricks, which was started in Fukaya city. Even the coal to fire the furnace was imported from France.

Tomioka was never a commercial success, but it fulfilled its function of demonstrating to the world that Japan was a rapidly developing industrialized nation.

RELATED: Kanto Region Waiting to Be Rediscovered As Center of Kimono Production

Maebashi was also at the forefront of the development and export of silk worm eggs, which was a very profitable trade, as the world’s egg supply was devastated by pebrine disease. Japan sold silk worldwide, but the United States became the most important trading partner.

Kawagoe was also a big silk producer and had several silk-producing factories. Ikutaro Ishikawa had failed at the tea export business but decided to try silk, as the government was interested in expanding the silk business. He built a steam-powered mill in Toyooka Iruma in Saitama, and two more successful factories in Kawagoe. One of the factories was where the Kawagoe post office now stands, and it was a working mill until 1954, when nylon took over from silk as the material for stockings.

Kawagoe was connected with Maebashi through the Matsudaira clan’s activities, but also because Kawagoe was known as a trading post. Cotton had been imported from San Tome in India since the 14th century and woven into striped cotton kimono called Touzan. From 1860, high quality cotton was also imported from Manchester in the United Kingdom.

In the 17th century, the Matsudaira clan zoned Kawagoe into samurai areas, temple and shrine areas, and the craft and trade area. The traders built their storehouses especially strongly because they didn’t want to lose their precious goods in any fire. That is why the storehouses on Kawagoe’s main street still remain, even though many of the living quarters behind the storehouses were burned down.

There was a great fire in 1893 and many of Kawagoe’s buildings were lost. Some people rebuilt in the modern, Taisho style, and many of these buildings remain around Kawagoe. Some are shops or cafés.

What did not survive the great fire was the famous clock tower that is now a symbol of Kawagoe. The tower was actually rebuilt with donations from the silk traders in Yokohama, who did a lot of business with the makers and merchants in Kawagoe.

The marketplace buildings have now been torn down, but they are in storage in the hopes that in the future the marketplace can be reconstructed. When that happens, we can discover what it was like there 150 years ago.

If you are interested in the history of Kawagoe and its working people, there is a small and free museum, Yamada Ya, Hattori, on the main storehouse street. It is temporarily closed because of the pandemic. This shop was a Terifuri Tonya for 250 years. Terifuri means sunshine and rain, and it sold geta and zori footwear for all occasions on fine days. In addition, on rainy days it sold bangasa (sturdy umbrellas) and janome gasa (high class slender umbrellas).

In the Meiji period they began to sell pharmaceuticals too. The textbooks on display show that the family was eager to take the government test and get a license. Behind the display cases is a raised tatami area where business would have been conducted. There is little furniture, but a small low desk with a money box, where accounting must have been done. Yamada Ya is probably typical of such a business in the Meiji period.

Yokohama’s Role in the Silk Road

Yokohama was the city where silk arrived from the hinterlands to start on its journey to other countries around the world. In 1858, Japan made a trade treaty with Great Britain and several other countries, but soon the U.S. accounted for half of the market.

It was not always safe for foreigners living in Japan in the late Edo period. There was still plenty of resistance to their presence. In 1862, Richardson, a British silk merchant who was impertinent enough not to dismount his horse in the face of some samurai from Kagoshima, was cut down between Yokohama and Kawasaki. The incident, which became known as the Namamugi Incident in Japanese, sparked a short war between Britain and Kagoshima.

By the late 19th century, a thriving foreign community developed in Yokohama. Within a few decades it transformed from a quiet fishing and farming village to one of the most cosmopolitan spots in Japan.

The first railway was built from Shimbashi (in Edo, now Tokyo) to the port at Yokohama, and carried silk. The large warehouses and a customs office were set up nearby as well. The oldest bank in Japan was set up in Yokohama in 1866, the Hong Kong and Shanghai bank, as Japan moved towards a cash economy.

The English House No. 7. Is the only trading house that was not destroyed in the Great Kanto Earthquake of 1923, and is now the Toda Peace Memorial Building. The other great buildings in Yokohama were constructed after the earthquake.

A plaque outside the Silk Museum marks English House No. 1, which belonged to the trading company Jardine and Matheson. The company traded in silk and other goods.

A huge red-brick governmental building near the harbor is the Silk Conditioning House, which checked the quality and quantity of all silk. The Yokohama Archives is now housed in the old British Consul Building.

The huge number of stone buildings, including many banks, built after the 1923 earthquake, testify to the wealth that silk trading had brought to Yokohama. The art deco beauty, The Hotel New Grand, stands looking out on the harbor and is fronted by the English-style rose garden of Yamashita Park.

Another art deco beauty is the ship the Hikawa Maru, docked across from the hotel. The elegant cruise ship was nicknamed the Queen of the Pacific and plied the route to Seattle between 1930 and 1960. Named after Hikawa Shrine in Omiya, she carries the crest associated with the shrine in her wrought iron staircase, and has decorations including stained glass from some of Japan’s finest artisans. Not only did she carry passengers for the luxury two-week cruise with its Japanese arts and fine French dining, there was also a special silk room on board.

Another important job was carrying the precious bales of silk to Seattle. From there, they went by train to the markets of New York. The ship has carried famous people, and made 238 peacetime crossings of the Pacific. It was also used as a naval hospital during World War II. It is now a floating museum.

Another fine location connected with silk is the Sankeien Garden. It was built and opened to the public in 1906 by Hara Sankei, the grandson-in-law of Zenzaburo Hara, a Saitama silk trader. Sankei had taken over the Tomioka Silk Mill, improving the quality of both spinning and the production of silkworm eggs.

Believing his wealth should be shared, he opened this garden for the public, restored many kinds of buildings within it, and also sponsored young and promising artists. A visit to Yokohama is a visit to see how the soft power of silk has transformed Japanese history.