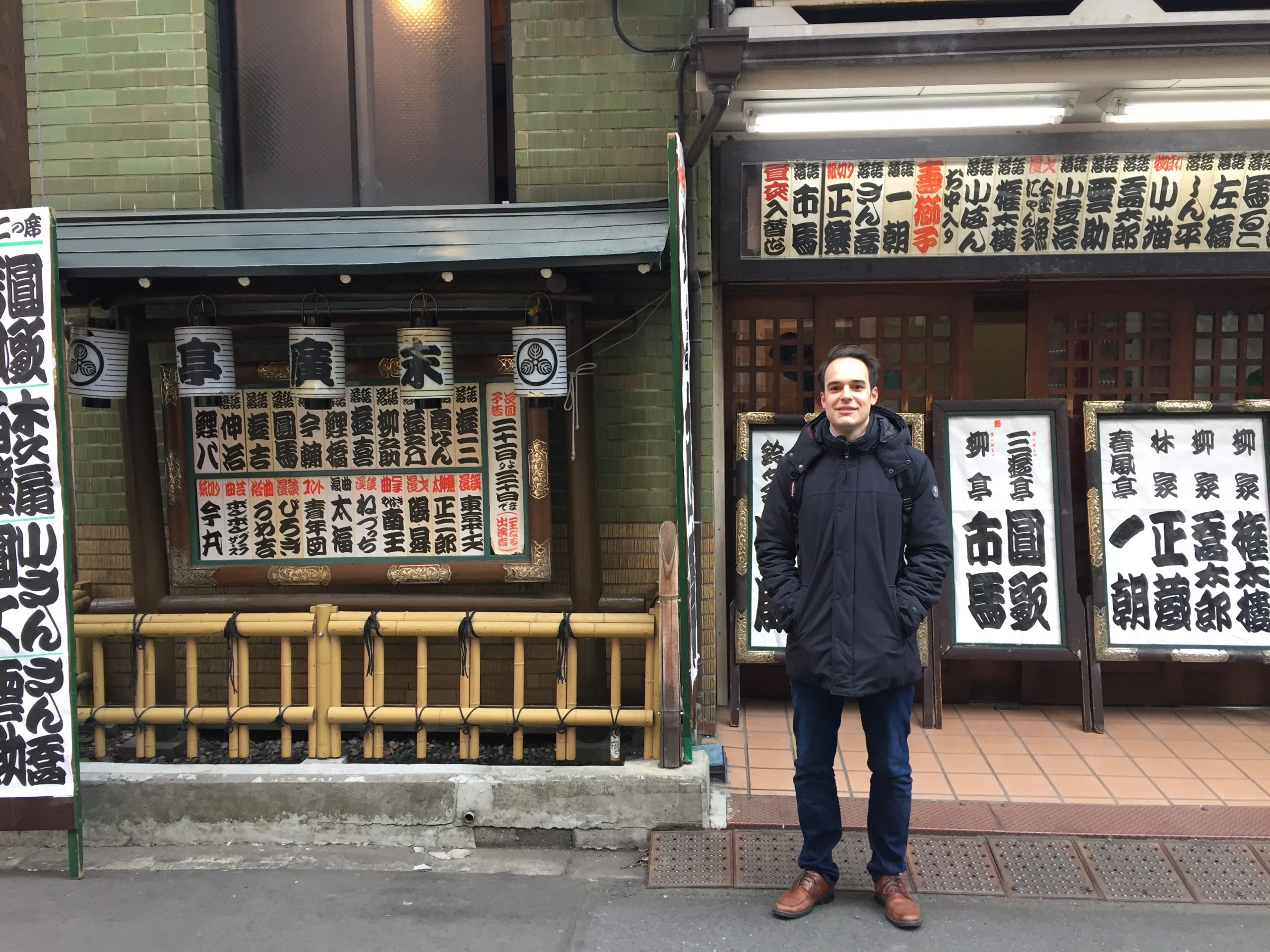 The success of JAPAN Forward’s holiday series of online performances is but one hint of the 21st Century surge in the popularity of rakugo, the Japanese art of comedic storytelling.

In particular, growing numbers of young people are showing an interest in the traditional art form. To find out why, JAPAN Forward sat down with Oxford University’s Marco Di Francesco (25), a PhD-level researcher fluent in Japanese whose specialization is in rakugo. We asked him just what it is about this particular performing art that continues to attract new generations of fans, and what its revival can tell us about today’s Japan.

The Art of Rakugo

Rakugo (literally, falling words) is a mode of storytelling in which a comedian recounts a humorous tale leading toward an ochi (the drop) or punchline.

Armed with only a small cloth (tenugui) and paper fan (sensu), the kneeling kimono-clad comedian, called a rakugo-ka, must act out a narrative.These tales often involve various different characters. And the rakugo-ka uses intonation, gesture, head movements, and mime to play each part and elicit laughter from the audience.

“Performances involve a really diverse and detailed form of storytelling,” Di Francesco says. “For example, there are some longer stories that are particularly moving – the ninjou-banashi (sentimental discourses). There are also scary stories – the kaidan-banashi (ghost discourses). They really are a kind of art.”

Perhaps due to the complex nature of the wordplay in Japanese, rakugo has until recently gained little exposure outside Japan.

“Modern novels,” Di Francesco continues, “have been translated into various languages from Japanese, so that people all around the world now know about Japanese written literature. The same going for movies. But no one outside Japan really knows about rakugo. Maybe some people know the name. But there is no way that overseas people can enjoy rakugo. This, for me, is a huge waste.

“It is such a rich and generally fascinating cultural product. And I feel that, if there are people researching literature, or culture, or art, then we should be researching rakugo too.”

RELATED: Indulge in a Dose of Holiday Laughter with Shunputei Ichinousuke’s Online Rakugo

The History of Rakugo

As a performing art, this mode of storytelling has a long and varied history.

It is said to have originated with Buddhist monks over a thousand years ago as a means of keeping aristocratic audiences awake during sermons. In the Edo period (1603-1868), when merchant classes emerged in the urban centers of Edo (Tokyo) and Osaka, audiences diversified. Rakugo then became a much-loved form of popular entertainment, remaining so well into the modern era.

By the 1990s however, rakugo as a ‘traditional’ form of popular entertainment was on the verge of dying out. Very few young people were actively engaging with the medium by that time, either as audience or performer.

Yet, since around 2005, a rakugo boom, driven initially by various rakugo-themed TV shows – a drama series ‘Tiger and Dragon’ (2005), for one – has greatly revived the art form’s fortunes.

Indeed, one 2015 survey by Hapiken (Asahi Group Holdings) shows that 26.4% of Japanese people have now attended a rakugo performance. This makes rakugo the most attended of Japan’s traditional performing arts, a list including kabuki, noh, and Japanese dance.

“Rakugo is still not massively popular of course,” Di Francesco argues. “For now, it is still seen as a somewhat niche cultural product.

“Yet the question to ask is, why is it doing so much better than before, particularly in 21st Century Japan when there are so many other forms of cultural entertainment available?”

One answer to this question is the growing sense of appeal found among young people. While participation in the other traditional arts has declined, the number of young people actively engaging with rakugo, both as audience and performer, has noticeably risen.

The aforementioned Hapiken survey of 2015 reveals that 62.1% of young people first experienced rakugo at school, when rakugo-ka were invited by their teachers to perform.

There are also now more active rakugo-ka in Japan than at any point in recorded history, suggesting that more young people are currently taking this plunge into the world of performing arts than ever before.

For example, since the roaring success in 2007-08 of the asadora ‘Chiritotechin’ – a serialized morning drama show about an aspiring female rakugo-ka – women are increasingly engaging with the art form.

“There are now many more women than before in the audience,” Di Francesco reveals. “And there are now also a number of female rakugo-ka, which is quite new in the rakugo world. It used to be – and still is – a very male-dominated industry, at least in terms of numbers. But it is becoming far more common to see these female rakugo-ka.”

In fact, a reported 30 of Tokyo’s 600 professional rakugo-ka – not to mention innumerable others engaged in grueling apprenticeships all over the city – are women. This is still a fairly small percentage of the total number. However, it represents a rapid recent increase, considering that it was only in 1993 that Shinyutei Karuta and Kokontei Kikuchiyo became the first female shin-uchi (fully-fledged rakugo masters).

The Desire to Become a Performer

Such changes contribute to a sense of momentum for rakugo as an art form, and to its continuing revival. This spells good things for the future of the performing arts and for the transmission of this ‘traditional’ performing art in particular.

But again, why rakugo? And what can be learned from these changes?

As Di Francesco argues, “It is one thing to think that a rakugo show is an interesting thing you might want to watch once. But another is to feel that you want to become a long-term fan. Another thing again is to feel that you might yourself want to become a rakugo-ka. The fact that so many more people than before are now choosing to do so suggests that this is something that should be studied.”

Analyzing the trend further, he raises a series of questions. “For example, what does the increasing desire for young people to become performers mean for the market?

“Does this change mean that the other options are now less attractive? Or does it mean that the boundary between the more ‘respectable’, stable career of the salaryman, and that of a ‘less respectable’ career as a performer, is now starting to blur?”

The Effect of COVID-19

During the original emergency declaration in April 2020, all rakugo theaters were closed. This included both the yose – long-standing theaters such as the Suehirotei in Shinjuku – and scheduled events featuring solo performers in venues such as public halls and restaurants.

Reopening in June, rakugo performances became far less frequent. Those that continue to go ahead are subject to strict restrictions on the number of attendees. This has led to various artists migrating online to digital theaters accessed via electronic tickets.

“These internet performances are extremely interesting,” Di Francesco states. “It was perhaps unexpected that the rakugo world should migrate online so easily. It is therefore fascinating to look at this situation, and at how the migration online has affected both the art itself, and the relationship between the audience and the performers.”

The rakugo-ka themselves were initially wary, Di Francesco continues. Because rakugo shows are such a two-way event between the rakugo-ka and audience, they were concerned that the necessity to appear online would affect performances.

However, as the JAPAN Forward holiday series shows, these performances have so far proved successful.

“From this single case of rakugo, which continues to prosper, there may be lessons that can be learned for helping other cultural industries that might be struggling.  Perhaps there is something that has been done within the rakugo world to revive it that can be applied to other at-risk forms of art,” says Di Francesco.

Clearly, the rakugo world’s ability to roll with the punches is helping the art form succeed.

Opening the world up to both women and younger generations helps to dispel the erroneous stuffy image sometimes associated with traditional performing arts, while the ability to migrate online displays an openness to change.

Therefore, where other performing arts may be seen as wholly about tradition, rakugo is still firmly all about the laughs. And this, perhaps, is what continues to appeal.

After all, one thing we could all do with right now is a good laugh.

About Marco Di Francesco : A graduate of Venice University, Marco Di Francesco is a recipient of Oxford University’s prestigious Clarendon Fund scholarship. He is in Japan to expand his anthropological study of rakugo in his PhD thesis, with the aim of eventually putting that research into a book, adding to only two such publications available in English.