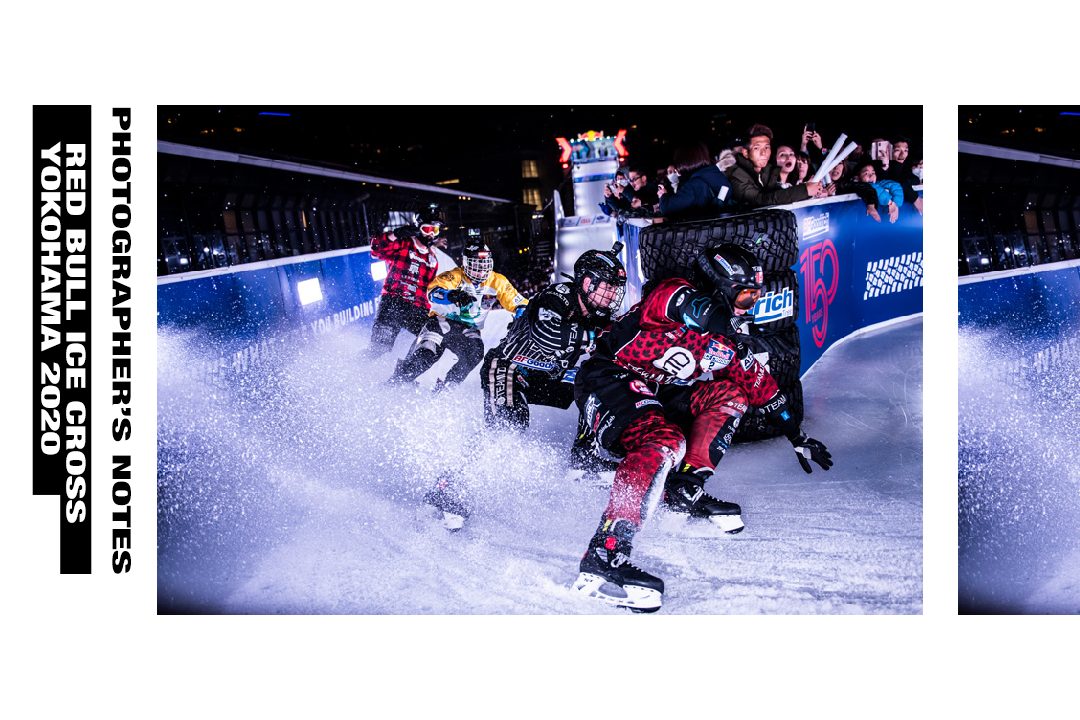 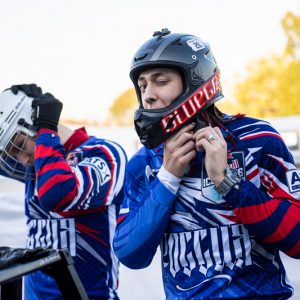 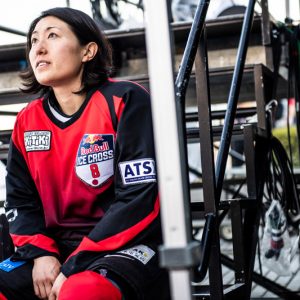 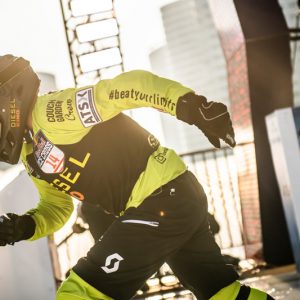 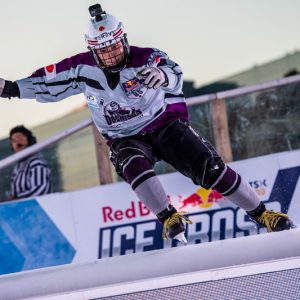 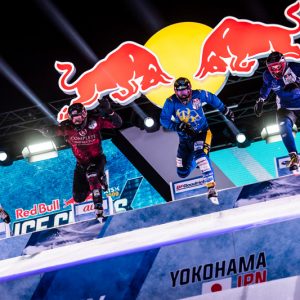 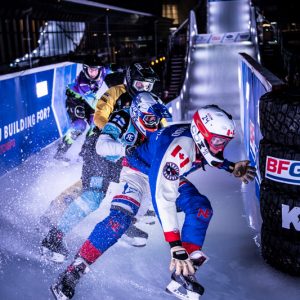 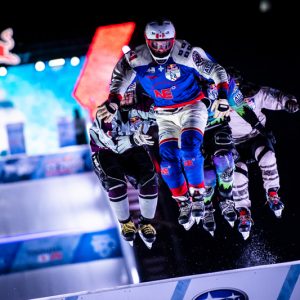 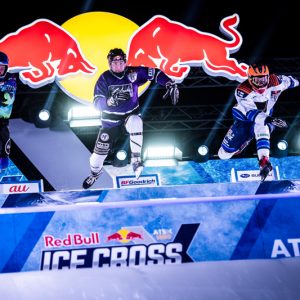 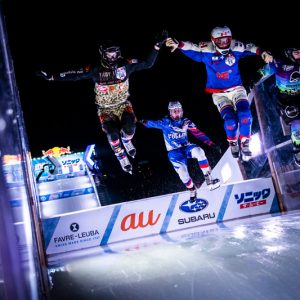 In the world of action sports photography, being a photographer for Red Bull is one of the highest peaks in the industry. There are unique events, amazing locations, and world-class athletes. You always walk away having learned a lot about both the sport you were shooting and yourself as a photographer.

Having the good luck to work with Red Bull Japan for the last 12 years, I have been fortunate to shoot everything from local guerrilla-style street shoots to massive multi-day events with athletes from all over the world.

One such massive event was the recently-held Red Bull Ice Cross, Yokohama. From February 13 to 15, I was one of a total of five photographers covering the three-day event, with each day having its own unique tasks and challenges for us to tackle and overcome.

I arrived on site on February 13. As before every other event, my first job was to get my accreditation — my “go anywhere” pass that would allow me to move freely during the event.

Then it was time to take a walk around the venue to see what had changed from the previous year. This allowed me to get a general feeling for the layout and how I would be able to move around during the main event.

For the competitors, this day was mainly a training, practice, and individual time trial day. Basically it was a chance to get used to the course. So many of the athletes were in good spirits.

Before some big events the competitors can be quite tense, but those who compete in the Red Bull Ice Cross always seem to be enjoying themselves and never seem too overly serious. You may notice this in the video.

After meeting up with the main photographer — and my boss for the weekend, Joerg Mitter — we were told basically to go out and play! Go find the angles we liked, play with lenses, play with the light, and generally just enjoy the day and get what we can.

So, grabbing my camera, I headed out to see what I could get.

Arriving at the starting area, many of the athletes had gathered at the bottom of the first drop and were discussing how to ride out from such a massive drop right at the start. I really enjoy covering these moments of conversation between the athletes as it gives the viewer a glimpse into parts of the competition you never usually get to see.

From there I decided to climb up to the starting point and see what I could see. Normally only a very few select people get to be up at the starting point, as it gets crowded with athletes and officials and could be dangerous if you are not careful. But with my “go anywhere” pass, I was free to move about.

When I arrived at the top, the sun was just starting to set, but it was in the perfect position to give some great backlighting for my shots. Not wanting to waste the light, I stayed up there and shot as much as I could.

It was interesting to see the athletes look over the edge before trying the big drop. Having stood up there myself and taken a good (safe) look over the edge, I can say for certain that it takes lots of courage to take that first drop, especially at speed — with three other people at the same time, like they do in the main competition. My hat goes off to everyone who made the drop.

From there, the rest of my day consisted of slowly moving down the course and checking angles and positions for the coming days. As the riders were coming down one at a time for their time trials, it wasn’t the most exciting shooting ever, but certainly a much-needed evening of getting used to the course ー for the athletes, and myself as well.

As far as content for the second day of shooting went, our only real shooting would begin in the evening with the qualification runs. So I had a good amount of time to chill and chat with the other photographers and staff.

So much of these events is rush- rush- rush, so it can be nice to have some time just to talk and get to know the other photographers. The “main” photographers come from overseas and follow the series around the world. It’s often a different group that comes to Japan each year, so I always enjoy meeting these kindred spirits and learning what I can from their skills and experience.

After a relaxed afternoon, we moved out across the course to shoot the qualifiers. These were runs with four athletes per race, and at night ー the same conditions as the main event the next day.

I was given a general assignment of where to start and finish the night, but nothing too rigid. It was just important to make sure the photographers were not too bunched up and shooting from the same spot.

And wouldn’t you know it, just as we were heading out, it started to rain. Oh well, I still had to do my job!

I started my shooting about two-thirds of the way down the track on a nice straight-of-way. I got some great shots there last year, so thought it would be a good place to get into the groove of the night. From there, I was really all over the place.

The purpose of this day’s shooting was to find angles and shots that would work well with the four athletes when they come down together during the races, so I was moving quite a bit. One of my favorite places to shoot was down at the finish, getting images of the riders after they had finished their races. In particular, there was one athlete who, during his race, had crashed and ended up with a bloody face. The amazing thing was he was still excited, and even gave me a big smile when he saw me taking his picture.

From there, I headed back up to the top of the course. There was a big jump after the initial massive drop, and the first turn of the course was also a really exciting place to shoot. Watching the four athletes fly through the air over the first jump was really impressive. They were getting some crazy air, and the speed at which they were flying by me was actually a little scary, haha!

Shooting in the first corner was really exciting as well, as it’s a great spot for bumps and crashes, and the athletes have to slow WAY down to make the turn. This meant a lot of ice was flying around from their sudden braking. Many times I had ice and slush fly up and get me and my camera. It was a lot of fun, to say the least.

The final highlight of the second night was the freestyle competition. This is where riders come down the course, one by one, and do various tricks over the jumps along the course. As I was at the beginning section of the course when this started, I ran up to the first big jump and started shooting there.

It really was amazing to see what these athletes could do with ice skates and speed. The huge flips, spins, and grabs made for some fun shooting! And, after a few more races, it was time to head back and work on the images from the day.

The big day was here and I was excited!

Our first assignment was to document the various booths and activities around the venue. This is not the most glamorous or exciting aspect of shooting, but something we always do as the various sponsors really appreciate seeing how their booths look, and how people are interacting with their displays.

My second assignment of the day was covering the side act performances before the main races started. As I always seem to know all the dancers, BMX riders, and other athletes that participate in these side acts, this shooting always becomes one of my assignments.

Having seen my images from the day before, for the main event I was asked to make sure to be in the first turn during the start and finals, as well as get more jumping images. Other than this, our main movements were agreed upon so as to not leave any big holes in our shooting along the night.

One of the biggest challenges I should mention: although the last two days of shooting I had been able to move around the venue very freely, the main event had spectators spread over almost every inch of the race course. This can make moving along the course quite difficult at times, and can actually close off some really good angles I had found over the past two days of shooting.

Because of this I decided to head out early and stake out my first shooting spot at the first turn. From there all I could do is wait. I always get a little nervous in these few minutes before the event starts. The atmosphere is electric with the excited spectators, making it a much different vibe than the last two days.

From there on, the night really was a blur of shooting, moving, shooting, moving, checking images, trying to get past people, and making sure I knew what was going on so I could be in place when and where I was needed. The freedom I had to work as an individual was gone, and I must work as a team member to ensure the overall success of our team ー and the event.

As the finals came close, I made sure to position myself back into the first corner, as was expected of me. During these races there are many times the four riders are spread out, and it’s hard to get a good shot of them all dynamically bunched up together, but this first corner was great for getting this kind of shot. And it was this kind of shot that was needed at the end of the day.

Even though I had already taken this shot a dozen times over the last three days, I made sure to understand what needed to be fixed and done better with each race, so that I could get a really good shot during the finals. In the end, the finals came and went, I got the shot I needed, gathered my gear and headed back to our container to edit and deliver my images from the day.

All in all, I had a GREAT time shooting this year’s Red Bull Ice Cross in Yokohama, and really hope it makes its way back here again in 2021. Big respect to all the athletes who competed this year as well. You are all amazing!

And if you want to also check out the official highlight video of the event, you can watch it by clicking on the link here.

Currently residing in Tokyo, I have lived in Japan for a total of over 15 years. For this time I have become deeply involved in a wide variety of action sports such as FMX, BMX street and flatland, snowboarding, breakdancing, etc. Through these photographic endeavours I have been able to work with many local and international organizations including Red Bull, G-Shock, Nikon, Sony, Reebok and others. I look forward to spreading the beauty of action sports through out Japan and the world though my photographs.