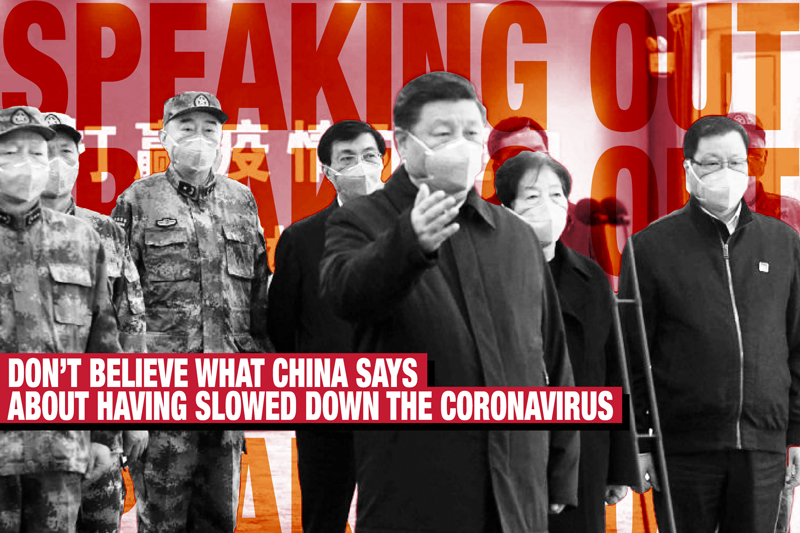 The new coronavirus originating from China’s Wuhan is wreaking havoc throughout the world. At the end of March, the number of coronavirus deaths in Italy surpassed 10,000. In the United States, the number of people infected with the virus has been increasing at a daily rate of 20,000.

In China, where the virus broke out first and spread, however, the government has strangely declared that the number of people infected with the virus has increased very slowly and that more than 90% of the infected have fully healed.

Some Japanese media suggest Japan should learn from China because it has successfully contained the coronavirus pandemic. However, it is not natural for China alone to dramatically hold down the number of infected people while other countries are desperately trying to prevent the pandemic from expanding further.

The number of infected people in China has been released through government-controlled media.

There are hundreds of foreign journalists in Beijing sent from all over the world. However, the Chinese government has kept them in Beijing for the nominal purpose of preventing their infection with the virus, effectively barring them from visiting regions affected by the virus, such as Hubei province including Wuhan, since the end of 2019.

Furthermore, the Chinese government has increased its pressure on foreign journalists to refrain from trying to reveal the truth. In mid-March, the government ordered reporters working for three American newspapers — The New York Times, The Wall Street Journal, and The Washington Post — to return their press credentials within 10 days, effectively expelling them out of China.

The action was officially explained as a retaliation against the U.S. government’s restrictions imposed on the number of Chinese media staffers stationed in the U.S. However, it is speculated that the Chinese government expelled disobedient U.S. journalists to conceal the fact that the infection was still expanding in China.

At the same time, the Chinese government has further tightened controls on the internet, thoroughly deleting postings that differ from government announcements. And it has detained journalists and intellectuals critical of the government regarding responses to the new coronavirus outbreak.

More than two months have passed since the disappearance of lawyer Chen Qiushi, who had sneaked into Wuhan and had been reporting on the internet on the situation of the city hit by the outbreak. Former university lecturer Xu Zhiyong and business tycoon Ren Zhiqiang have also gone missing.

While suppressing domestic free speech, China has declared to the international community that it had overcome the outbreak. No one can verify the numbers that China has announced. It is risky to blindly accept what the Chinese government says.

A version of this article was first published by the Japan Institute for National Fundamentals, Speaking Out #668, on April 1, 2020.