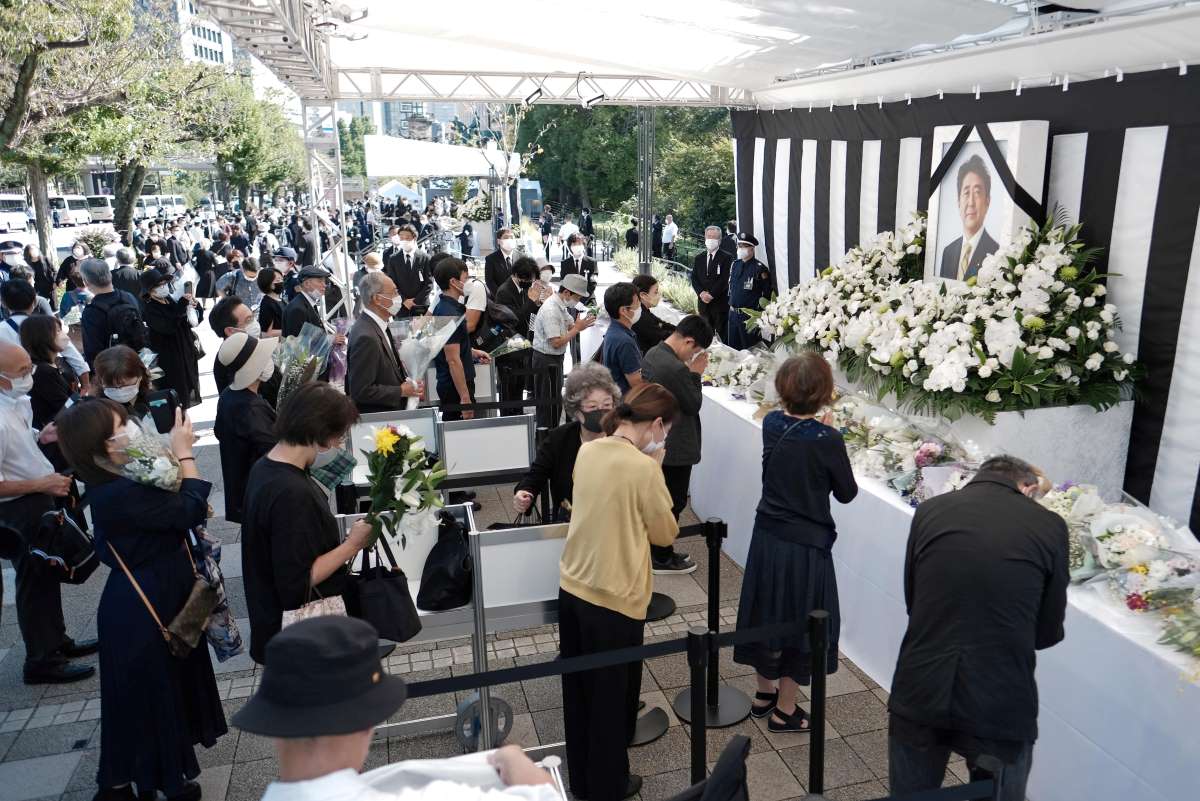 People offering flowers outside of the Nippon Budokan in mourning for former Prime Minister Shinzo Abe in Chiyoda Ward, Tokyo, on the morning of September 27. (Pool photo)

It was one of those sticky late September days that seemed to hark back to the summer rather than anticipating the crispness of the Tokyo autumn. I emerged from the Kudanshita metro station and joined the slow-moving crowd edging up the hill towards Yasukuni Shrine. The other side of the road, where the Nippon Budokan Hall stood, was blocked off to pedestrians.

Many moons ago, I worked in an office near here. Indeed, my colleagues and I would sometimes take our bento lunchboxes to the usually deserted shrine.

I also have memories of various events at the Budokan. Concerts by Eric Clapton, The Who, Bob Dylan and Willie Nelson. A karate tournament presided over by the awesome figure of Masatatsu Oyama, the originator of Kyokushinkai full contact karate.

Paying Respects in a State Funeral

Today, though, I was participating in a much more sombre event, the State Funeral of Shinzo Abe, Japan’s longest-serving prime minister. I did not know exactly what to expect, but neither did anybody else. Japan’s last state funeral, for Shigeru Yoshida, took place in 1967. There must be very few people who attended both events.

Imagining the mood, I wore a dark shirt and trousers and a black mask, though it turned out that white masks were advised. I did better with my ample bouquet, having chosen white lilies, as had well over half the public lining up to present their flowers.

The area for presenting flowers in memory of Mr Abe was right next to the Budokan. But the organizers had sensibly decided not to have huge crowds standing around for hours. Instead, we were sent on a scenic detour that took us past the British Embassy, where there were still floral tributes to the late Queen Elizabeth. Then on past the National Theatre and the Supreme Court, before doubling back along the Imperial moat to Chidorigafuchi, one of Tokyo’s prime cherry blossom spots in the spring.

Finally, I arrived at the destination. There were many tables on which to place the bouquets, behind them large photos of a relaxed-looking Shinzo Abe. As you would expect, security was tight, but also polite and helpful. Signs everywhere said “no photos”. They were widely ignored, but nobody seemed to mind.

In Line With Fellow Walkers

For me, the whole experience took about three hours. The only protest I saw was when a group of elderly ladies appeared at a junction and attempted to hand out fliers denouncing Abe’s 悪政 (“evil politics”).

Most of my fellow walkers ー mostly middle-aged or younger ーblanked them out as if they did not exist. Only the man directly in front of me reacted by taking a flier, giving it a cursory glance, then scrunching it up and hurling it to the ground.

I’m glad the protesters were there, and glad they got some feedback.

Several of my left-wing friends were opposed to the State Funeral taking place at all, citing the fact that opinion polls showed that a majority of the public did not approve of it. Opinion polls contain much important information ー especially, when the same question is asked over time ー but they have limitations. In particular, the simple polls taken by Japanese newspapers cannot measure the intensity of opinions.

A good proxy for intensity is how many people are willing to take time off work, in some cases traveling from distant locations, and trudge around central Tokyo in slow-moving lines on a hot and humid day. On that basis, the pro-funeral group outmatched the anti-funeral group by about 90% to 10%.

Strangely, there was grumbling about the cost, which was borne by the public purse. The estimated sum of $12 million USD is trivial, equivalent to ten cents (1/10th of $1 USD) per Japanese citizen, and was spent mainly on security and accommodation for the foreign guests.

Compare that with the last G7 meeting in Canada, which cost $750 million Canadian dollars ($542 million USD).

Why was it appropriate to hold such an elaborate state funeral for Shinzo Abe but not for other eminent leaders, such as Yasuhiro Nakasone? In retrospect, perhaps there should have been a similar event for Nakasone, who did great things for Japan in his time. But to be frank, there are no other fitting candidates amongst Japan’s myriad ex-prime ministers.

Shinzo Abe stands out for his length of tenure and the breadth of the changes that he initiated. But there is more to it than that. There is the manner of his death to consider too. The State Funeral, with the participation of the public in offering flowers and signing condolences, has another message – that Japanese society will not accept political assassination.

Geopolitical Context of The Moment

Finally, there is the geopolitical context of this particular moment in history. Shigeru Yoshida, the only other politician to be granted a state funeral, was a key figure in the development of post-war Japan. But he was not a global figure because Japan itself had little global impact then. Japan was not even a member of the OECD when Yoshida was politically active.

Today Japan has become a crucial player in the politics of Asia, the fastest growing and potentially wealthiest area in the world. The expansionism of China and the naked aggression of Vladimir Putin’s Russia have set off a reaction in Western and Asian countries that is bringing them closer together. Expectations for Japan’s role are high.

That is why four Australian ex-prime ministers attended the funeral, as well as so many dignitaries from other regions.

Japan is global. The funeral was a global event with a global message. Those who criticize it on grounds of expense, constitutional niceties or distaste for Abe’s policies are thinking very small. The man himself rarely did that.