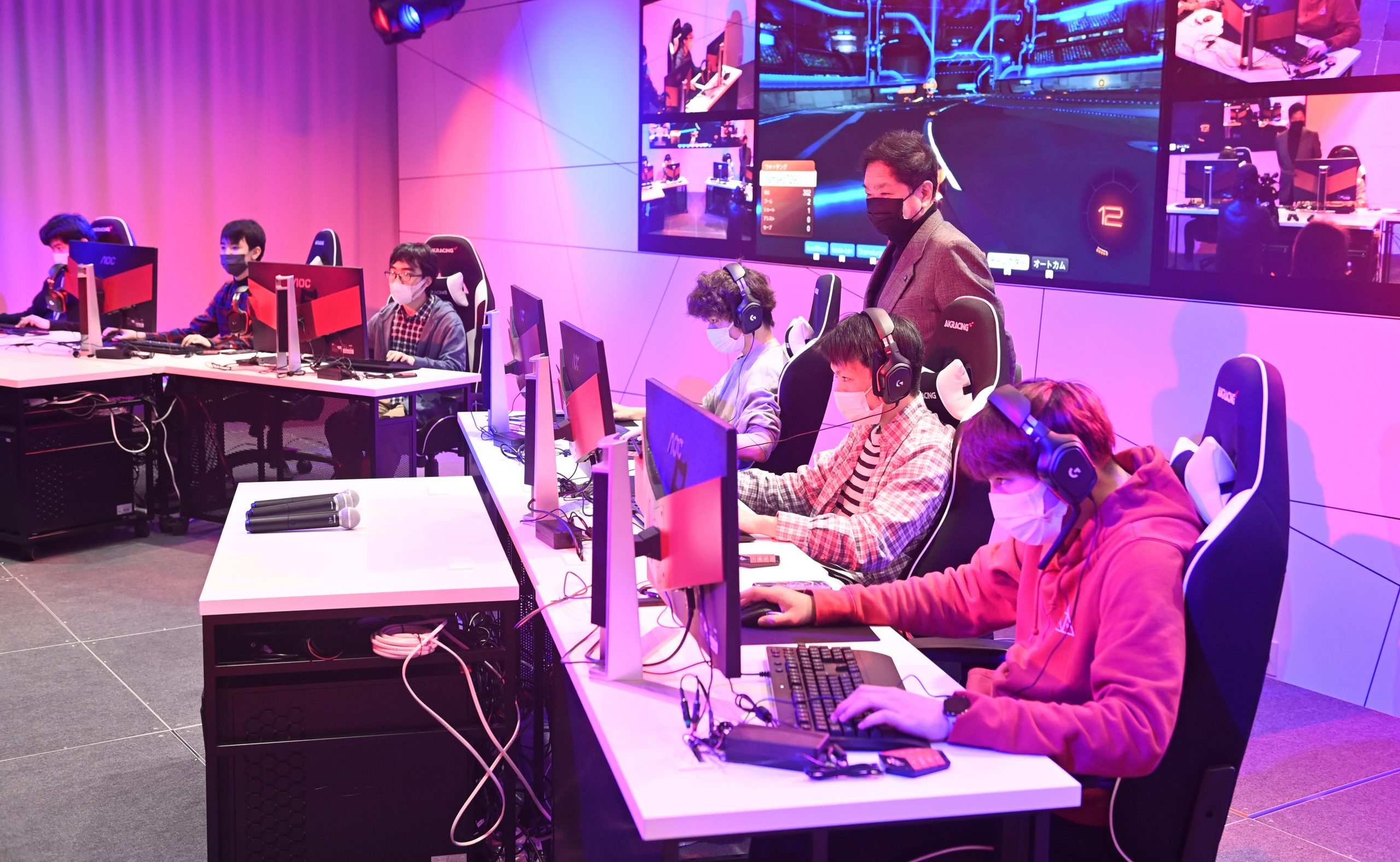 People playing video games in “esports Arena”, a facility of Kindai University for developing human resources in the field of esports. (photo by Sankei Shimbun)

Rhythm games can improve the attention function of players, especially those who play games frequently. This has been inferred from a recent study conducted by two Japanese scholars, Assistant Professor Goich Hagiwara and Research Assistant Saori Kihara, of Kyushu Sangyo University.

This study is now published in the Journal of Digital Life, a new multidisciplinary, peer-reviewed, open access, online journal based in Japan. In an era when esports have become popular worldwide, rhythm games could be a welcome addition to the training routine of enthusiastic gamers.

Esports, short for electronic sports, are a form of competition using video games. They include first-person shooter (FPS), race games, online card games, and many other categories. The global population of esports players is said to be more than 100 million.

The establishment of the Japan eSports Union (JeSU) in 2018 was the first step in Japan to provide an environment for the development of esports. Now the category will be an official medal event at the Asian Games in September 2022.

The Japanese government has also been trying to incubate the esports industry. Japan’s Ministry of Economy, Trade, and Industry has focused on the esports market as a new growth area in the online content sector. At the same time, has promoted academic research to clarify the effect of esports on health and education.

Rising expectations for the new industry were in the background of the new study. Researchers were looking for another field in which videogames could be used beyond leisure. They focused on the effect of rhythm games, a genre of music-themed action videogames, on attention function.

Players competing for higher scores tap or drag markers on a screen at the right moment. This is all in time with the music or beat, for example.

Dr. Hagiwara picked rhythm games for research from among various genres of video games for a reason. In fact, several professional esports players say that they play rhythm games before practice or competition to improve their physical and mental skills. Hagiwara  specifically referred to one popular professional esports player of the shooting game FORTNITE, who claims he warms up with the rhythm game Osu! before starting the esports game.

Earlier research by Dr. Hagiwara involving 10 male college students who play games frequently found that attention function was significantly improved after playing Osu!. The new research therefore tried to clarify the effect on the attention function of a wider range of age groups.

To assess attention function, the study used the Trail Making Test (TMT). Generally, TMT is divided into two parts: Part A and Part B. Part A uses 25 numbers (1 to 25), while Part B uses 13 numbers (1 to 13) and 12 letters from the English alphabet (A to L). The numbers and the letters are randomly placed on a paper.

In Part A, participants draw lines to connect 1 to 25 in a sequential order as quickly as possible. In Part B, they do the same while alternating the numbers and the letters, as in 1-A-2-B-3…

In both Part A and B, the time for completing the procedure is measured. The shorter the time, the higher the attention function of the participant. It measures recognition of numbers and characters, visual exploration, speed of movement of the eyes and hands, speed of information processing, flexibility of mental activity, and motor functions.

Applying the Test to Real People

Participants in the study included 16 healthy adult males from their 20s to 50s. They took the Japanese version of TMT, which uses Japanese hiragana characters instead of English letters.

Participants were asked to complete a questionnaire on their demographics, game frequency, previous experience playing Osu!, and mood. Then they wore an electroencephalogram (EEG) for 2 minutes, followed by taking the TMT and playing Osu! for 10 minutes (4 games).

After finishing the round, they immediately took a TMT and reported their post test mood on the scale indicated by the questionnaire.

The data were analyzed by focusing on the factors of age and game frequency, using IBM SPSS Statistics (version 26.0).


What the Results Show

The report also noted: “This is a new finding, as to the best of our knowledge, there are no studies comparing different age groups.”

The game frequency of the participants was classified into three groups.

The bottom line, though, is that the study infers rhythm games can be a useful training tool for game users because of the positive effect on the attention function of frequent gamers.

It also suggests that rhythm games have potential as a health-promoting tool for elderly people.

Sankei Biz is a Japanese language publication of The Sankei Shimbun focused on business and economy. Journal of Digital Life is its related English online peer-reviewed, open access journal based in Japan targeting the digital technology audience.