Onboard the USS Abraham Lincoln Allies are Deterring Tyranny 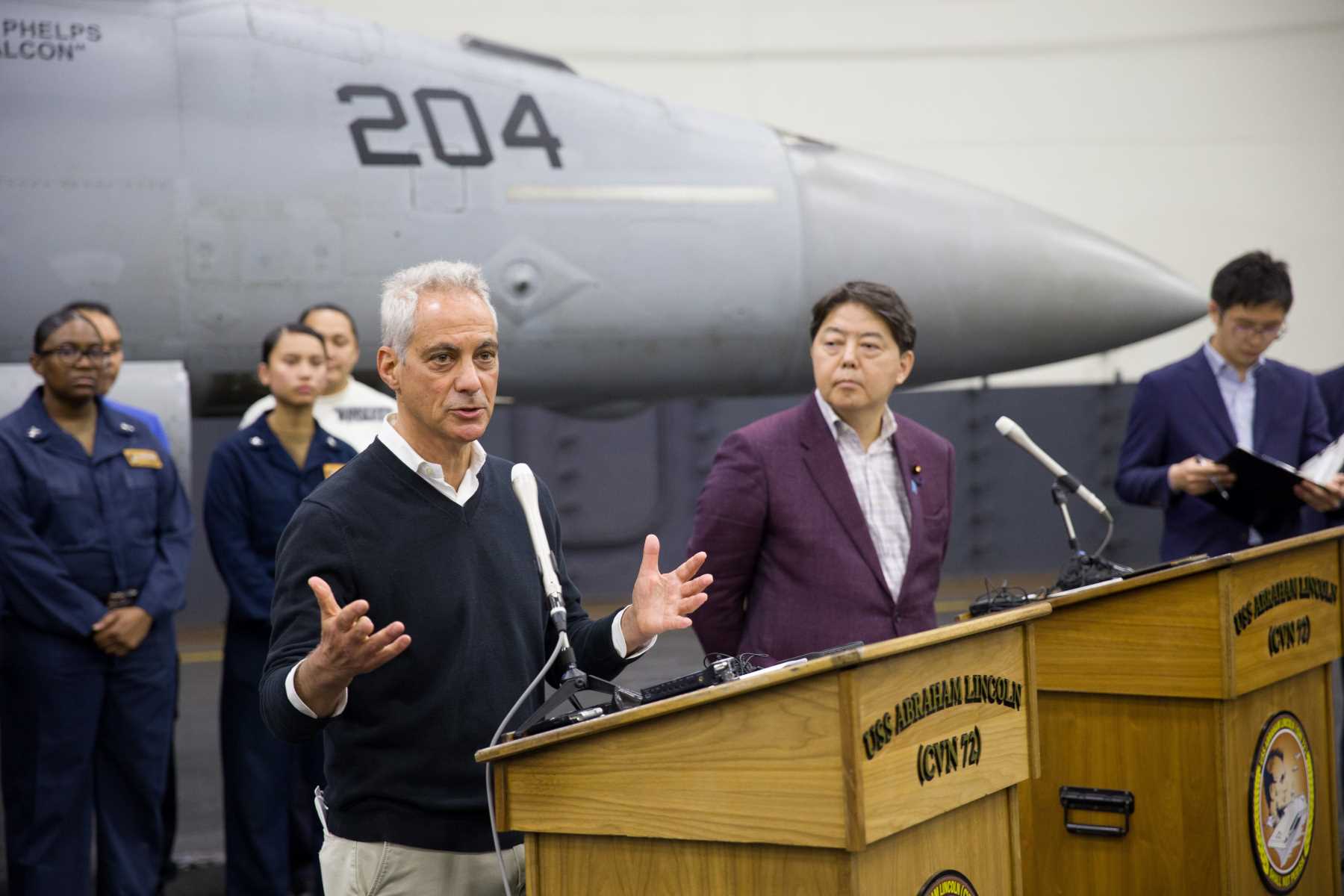 Japanese Foreign Minister Yoshimasa Hayashi boarded the nuclear powered aircraft carrier, USS Abraham Lincoln, alongside US Ambassador to Japan Rahm Emanuel and others on Saturday, April 23. The aircraft carrier, which is currently deployed in the Philippine Sea, was on a port visit in Japan at the time.

The visit, which included observing an aircraft takeoff and landing drill, was made at the invitation of the United States government.

Since the beginning of 2022, North Korea has repeatedly launched intercontinental ballistic missiles (ICBMs),and pursued new nuclear weapons development. Over the same time, China has continued its own saber rattling in the East and South China Seas and Taiwan Strait. The aim of the shipboard visit is to deter such moves by both aggressive neighbors.

It has been twelve years since the last time a Japanese foreign minister, Mr. Katsuya Okada in 2010, paid an onboard visit to a United States aircraft carrier.

American Ambassador Emanuel elaborated on the purpose of the visit this time, announcing, “The USS Lincoln conducted a bilateral exercise with Japan’s Maritime Self-Defense Force in the Philippine Sea and East China Sea earlier this week.”

Mr. Hayashi stood with Mr. Emanuel at the joint press conference, adding: “Improving joint response capabilities through practical training is directly related to enhancing interoperability and readiness of the Japan-U.S. alliance, and is important for demonstrating that Japan and the US are always prepared for anything.

The USS Abraham Lincoln hosted South Korean General Won In Choul, Chairman of that country’s Joint Chiefs of Staff, earlier this month. For the US side, there seems to be hope for strengthening trilateral cooperation between Japan, the United States and South Korea.

South Korean president-elect Suk-yeol Yoon’s delegation visited Japan near the end of April. Ambassador Emanuel mentioned the visit at the joint press conference on April 23, saying the United States was looking forward to: “Beginng a new day, a new chapter in the trilateral relationship based on renewed friendship.”

He added, “The three leading democracies in the Indo-Pacific have shared values, shared interests, a shared future, one mission: freedom.”

Ambassador Emanuel mentioned the concern over a possible situation resembling Russia’s invasion of Ukraine happening in the Indo-Pacific region.

“You’re beginning to see early reports that [economic sanctions] are not only hitting consumers, but also a lot of people in the political and other high echelons, who are realizing that this [invasion] was a mistake,” he said. Then he added “China’s taking note of this, assessing its own ability, with a pause on any type of aggression.”

The USS Abraham Lincoln entered the Sea of Japan off the eastern coast of South Korea on Tuesday, April 12 and conducted drills with the South Korean military.