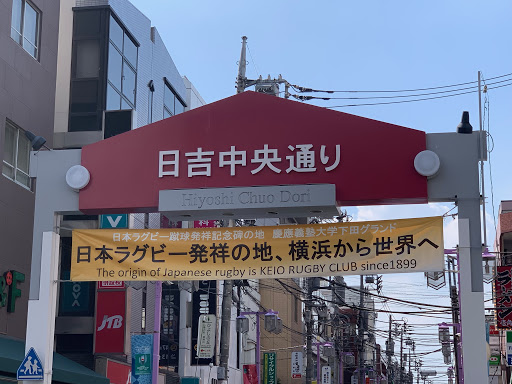 Here’s a fact you probably didn’t know: Japan has the fourth largest rugby population in the world.

This may not be surprising, given the country has 120 million people. The actual number of registered players is around 125,000 (0.1% of the entire population) with almost 4,000 clubs nationwide. That makes their current world ranking of 10th in rugby not too bad.

It’s called ragubii in Japanese. “Union” is hardly ever mentioned because the Rugby League has never featured in the Japanese sporting landscape. During the war years when Western sports fell out of favor, rugby was referred to only with the Japanese appellation tokyu, literally “fighting ball,” which nicely encapsulates the combative nature of the sport — and the times.

The Japan Rugby Football Association was inaugurated in 1926, but the sport had been played in Japan much longer than this. Records point to the first rugby match in Japan in 1866 with the founding of the Yokohama Football Club.

A later clash between a bunch of British sailors residing in Yokohama also took place in 1874. As such, it is quite fitting that the champion team of Rugby World Cup 2019 is going to be decided at International Stadium Yokohama (Nissan Stadium).

The year 1874 was shortly after Japan opened its doors to the West following almost 250 years of self-imposed national isolation. Most Japanese had never seen foreigners before, so the sight of a whole rabble of barbarians beating each other up over an oval ball must surely have been a perplexing sight to behold.

There is an ancient game of football in Japan called kemari in which nobles suited out in the finest silk robes competed to keep a balloon-like sphere in the air, but nothing like the ruff-and-tumble scrapping that broke out in Yokohama that day. If anything, the whole spectacle must have resembled the ferocious martial arts that samurai trained in.

In fact, it was precisely because of the combative nature of rugby, the values of fair play, teamwork, and the drive to always go forward throwing body and soul into each phase that it appealed to Japanese, especially those formerly of samurai stock. It was interpreted by some as a Western version of Bushido, or The Way of the Warrior.

The first Japanese person known to have played rugby was a young student, Kikuchi Dairoku (who would become a Minister of Education), who traveled to Britain to study in 1872. Nevertheless, the sport was not taken up by Japanese players until around 1899, when it was introduced to students at the prestigious private university known as Keio. (If you have a ¥10,000 JPY note in your wallet, the portrait is of the founder of Keio, Yukichi Fukuzawa.)

The turn of the century was a time of heightened interest in sports and physical culture in Japan. The traditional martial arts, for example, were modernized and became popular subjects in the nation’s schools, and Western sports such as baseball rapidly gathered an avid following among the country’s youth. Rugby, however, took a little longer to become established.

The two men responsible for bringing the sport to Keio were Edward B. Clark and Ginnosuke Tanaka, both graduates of Cambridge University. It was not as if the Keio club had many opponents with other universities, and they were often subjected to humiliating defeats at the hands of expat teams. One such match was against the so-called “Yokohama Foreigners” in 1901, where they lost 35-5. But it was a start, and Tanaka is now considered to be the father of rugby in Japan.

In the 1920s, Tanaka’s efforts to popularize rugby began to pay off. Other universities, such as Meiji and Waseda, also formed clubs, and an intense rugby rivalry between these private colleges remains to this day.

In the 1920s, Japan’s rugby population had exploded to around 60,000. That gave them more players than Scotland, Wales, and Ireland combined!

By the time the Japan Rugby Football Union was inaugurated in 1926, there were approximately 1,500 rugby clubs scattered throughout the “Land of the Rising Scrum.” Even members of the imperial family were keen followers. The then-emperor’s younger brother, Prince Chichibu, was so enamored with rugby, he became the first president of the JRFU. The Prince Chichibu Memorial Stadium in Tokyo, where several RWC2019 matches will be played, is named after him.

If there is one thing a Japanese person likes, it’s seeing their national team punching above its weight in the international arena of any sport. Despite their usually quiet, reserved demeanor, Japanese are actually highly competitive and quite nationalistic when it comes to sports.

For sure, they are the perennial Asian champions (23 out of 28 titles), meaning they always qualify for the RWC. While they have also done fairly well in the RWC in recent years, they have never gotten out of the pools. Until that stunning victory over South Africa (34-32) at the 8th RWC in 2015, their only successful outing at the sport’s premier competition was a win over Zimbabwe way back in 1991 at the 2nd RWC.

But not only were they not winning at RWCs, they were being thrashed by the likes of the All Blacks (17-145) and the Wallabies (3-91).

These losses and dearth of victories against international sides essentially killed the rugby spark in Japan. Beating the Boks (of South Africa) with that last-minute try was Japan’s first victory at a RWC in 24 years. It was a monumental David-versus-Goliath encounter that had the whole country, fans or not, in a frenzied state of rugby fever. The spark was lit again, and as a team sport it is now ranked third in Japan after baseball and soccer.

How will the hosts fair this time? After a successful campaign winning the Pacific Nations Cup this year, they must be feeling the time is right for their first ever foray out of the pools. RWC2015 was so painfully close. In pool B, Japan beat SA, Samoa, and the USA. It was the first time in the history of the RWC that a team won 3 of its 4 matches but still failed to make it through the pool, losing on points for the second spot to Scotland.

I wouldn’t go so far as to say that Scotland is Japan’s nemesis, but it will make for one heck of a juicy match on October 13, when Japan will get another crack at Scotland in the final pool match. And, guess where? International Stadium Yokohama…. Thistle or Cherry Blossom?

Look for JAPAN Forward’s coverage of the Rugby World Cup 2019 on these pages.