Shockwaves from the Tonga Volcanic Eruption Reverberated Around the World 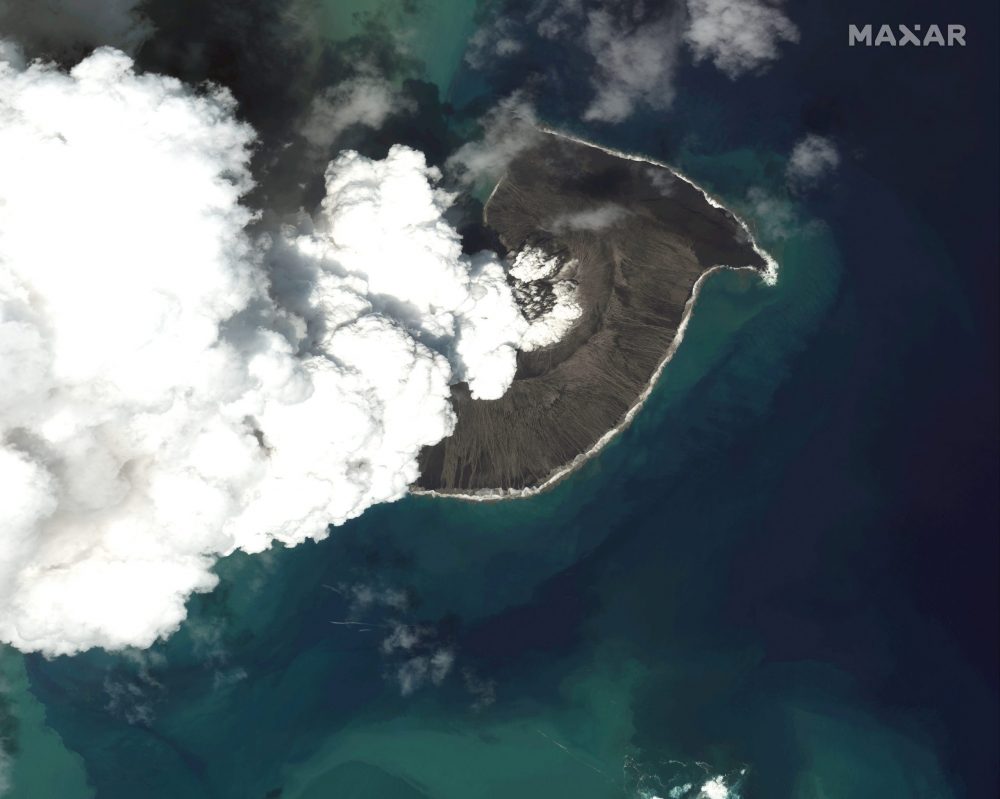 Weathernews Inc. confirmed high-density observational data of sudden changes in atmospheric pressure, believed to be due to the large-scale volcanic eruption near the Tonga archipelago, by its proprietary Soratena weather sensors that are installed in approximately 3,000 locations throughout Japan. It is freely sharing the observation data on atmospheric pressure for the elucidation of the relevant mechanisms by researchers worldwide.

Temporary changes in atmospheric pressure were observed over a wide area due to the large-scale eruption of Hunga Tonga-Hunga Ha’apai near the Tonga archipelago at about 1:00 PM on January 15, 2022 (Japan time). The atmospheric pressure changes observed by Soratena at about 8:00 PM on January 15 are believed to be attributable to the shockwaves, or air vibration, caused by the eruption.

Further, similar changes in atmospheric pressure were observed at about 9:00 AM on the 17th, indicating the possibility that the air vibration circled around the earth and returned to Japan.

Soratena is a proprietary weather sensor that observes the atmospheric pressure, temperature, humidity, and three other elements every minute. Installed in approximately 3,000 locations throughout Japan, the sensors comprise the largest high-density observation network in the country.

Weathernews hopes that the use of its observation data in research will contribute to the elucidation of phenomena such as the occurrence of tsunami and air vibration due to eruptions.


RELATED: Looking for Cooperation on Tonga Volcanic Eruption with Japan, New Zealand, Australia, US and France

Weathernews’ Soratena weather sensors observed sudden changes in atmospheric pressure throughout Japan on January 15, 2022, from 8:00 PM to a little past 9:00 PM (JST). They are believed to have been caused by the shockwaves, or air vibrations, from the eruption of Hunga Tonga-Hunga Ha’apai in the periphery of the Tonga archipelago at about 1:00 PM on the same day, January 15.

The latest upgrade enables the timely determination of environmental performance as stipulated in the regulations adopted by IMO in June 2021.

The Service rates the environmental performance for each voyage on a five-point scale based on CO2 emissions, fuel consumption, sailing distance, and other actual voyage data.

Since it is now possible to view data on the Web, ship owners and ship management companies are regularly able to monitor the CO2 emissions and environmental performance of their vessels. The service can be linked to any existing system, including corporate navigation management systems, since the data is provided to ship owners and ship management companies through API or other means immediately after every voyage.

Going forward, Weathernews will add a function to the OSR (Optimum Ship Routeing) Service, which supports the selection of optimum routes, to enable the ecocentric selection of routes and speeds to reduce CO2, by the end of 2022. OSR is a routing service that addresses diversifying needs, including vessel safety and economic efficiency (reduced fuel consumption). Based on the analysis of fuel consumption, speed, and other performance characteristics of individual vessels, the optimum route and engine speed, as well as other information necessary for target achievement, will be shared with the captain of the relevant vessel and the shore-side operator.

The addition of the new need of “going green” to the OSR service will enable voyages with reduced CO2 emissions. Customers will also be able to determine the actual reduction in CO2 emission after any voyage by using the CIM Service to calculate the amount of decrease by the baseline method. By combining the OSR and the CIM Services it will be possible for customers to realize ecocentric voyages and visualize  the actual reduction in emissions.

Changes in atmospheric pressure were observed throughout Japan again on January 17, from shortly before 9:00 AM to a little past 10:00 AM.

Data from Soratena indicate the atmospheric pressure rising and then falling immediately, progressing in concentric circles from the southeastern side of the Japanese archipelago including the Kanto region and the Izu Islands. The pressure changes observed were approximately 2 hPa on January 15, while even the more significant changes observed were only about 1 hPa on January 17.

In addition, air vibration circling around the earth from the opposite direction is believed to have passed by Japan at about 5:00 to 6:00 PM on January 16, resulting in the observation of minute changes in atmospheric pressure during this time period.

According to Professor Fumihiko Imamura of the Tohoku University International Research Institute of Disaster Science, there is a possibility that air vibrations attributable to the large-scale volcanic eruption in Tonga triggered and magnified the tsunami in Japan and other pan-Pacific areas.

Weathernews is providing observational data on atmospheric pressure from the Soratena weather sensors, free of charge for research purposes only, so that they may be used effectively in studies related to the elucidation of various phenomena as well as disaster prevention. Researchers who wish to have access to the data are invited to contact Weathernews via the Inquiry Form, clearly indicating how they intend to use the data.