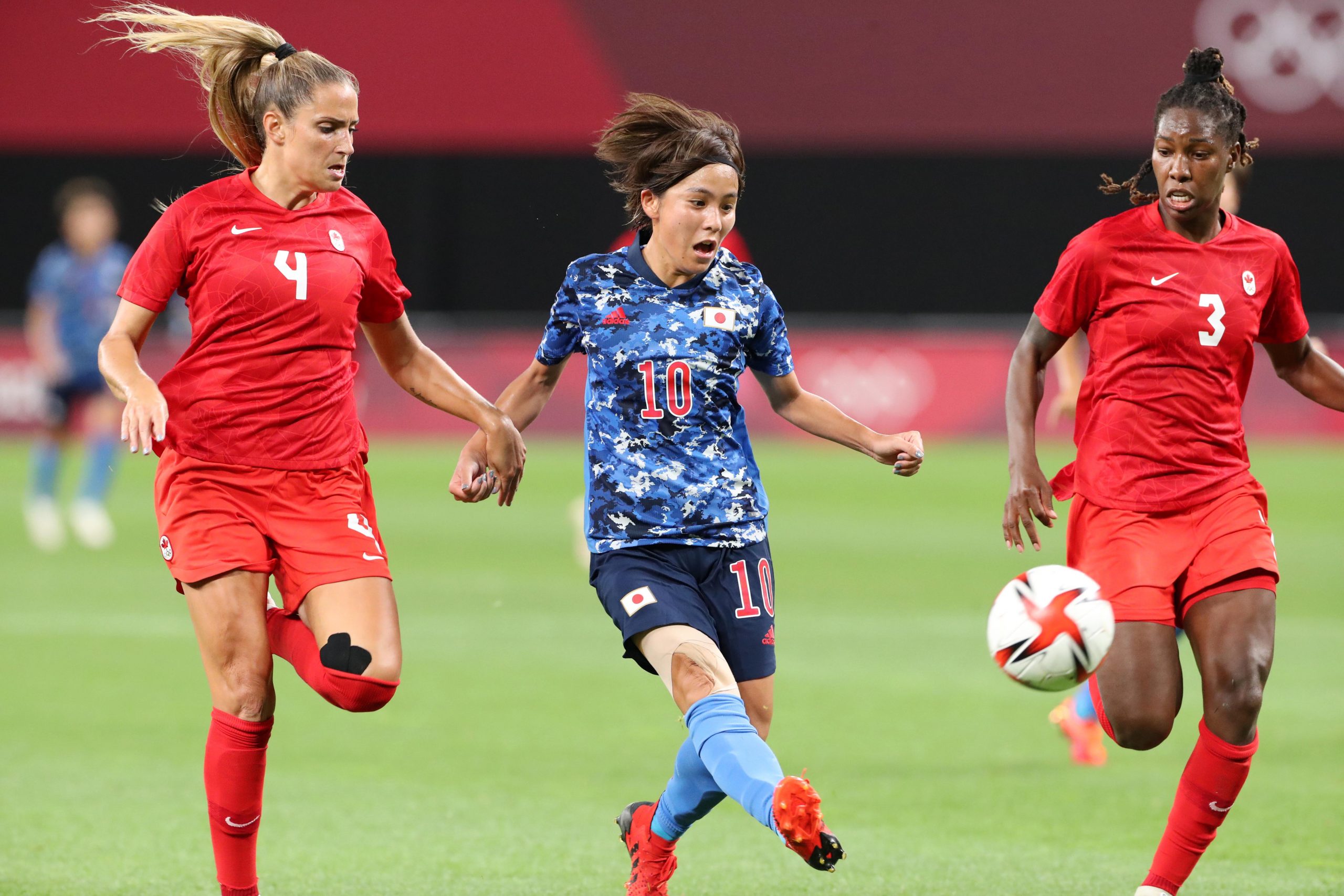 Japan's Mana Iwabuchi notches a match-tying goal in the 84th minute against Canada in a Group E match at Sapporo Dome on July 21.

Nadeshiko Japan achieved a close call at Sapporo Dome against Canada  by achieving a 1-1 draw on the first day of women’s soccer at the Tokyo 2020 Olympics, in an exciting match which saw both sides trying to get a goal until the last few seconds of injury time.

Canada was quick to bring advantage to its side, however, with captain and veteran forward player Christine Sinclair, who scored in the sixth minute of the first half on Wednesday, July 21.

Sinclair, 38 years old, in her 300th cap, holds the all-time record for most international goals among both men’s and women’s football players, and in this match scored her 187th goal.

After that, Nadeshiko appeared stunned, and for 15 minutes seemed to struggle to keep up with their opponents, with ball possession as low as 32%. Canada’s players marked consistently closely, including the Japanese goalkeeper, Sakiko Ikeda, and Japan still didn’t manage to equalize the score by the time the clock hit the 45-minute mark.

In the second half, Japan picked up the pace in trying to catch up with Canada, but the action was still fraught by close calls and missed opportunities. In the 47th minute, Mina Tanaka, a 23-year-old from Thailand, gained a penalty kick, after a foul was called on Canadian goalkeeper Stephanie Labbe, who had come to intersect Tanaka in a goal attempt.

In a moving show of sport spirit, however, the 34-year-old Labbe, despite being in tears and visibly in pain, stood up and snatched Tanaka’s kick in the 54th minute. Labbe even parried a number of goal attempts a couple of minutes later, before exiting the pitch in the 58th and being replaced by Kailen Sheridan.

In a further scare for Japan, Canada scored a goal in the 59th minute, with an assist by forward Jannie Beckie, but it was called offside after review by the video assistant referee (VAR).

The breakthrough for Japan came after a couple of substitutions, which included striker Jun Endo and brought pressure to Canada.

“There were difficulties in the first part of the game, but I was happy that I could score a goal,” Iwabuchi said after the match.

The last minutes of the game, including the eight minutes of stoppage time, saw continued pressure from Canada, including a high shot by midfielder Jessie Fleming, and the contest came to a close.

Looking back at the match, Japan manager Asako Takakura commented that it was a “difficult match, given that it was the first game. We were trying to catch up, and we couldn’t set our rhythm in the first half.”

“I would like to take this as a plus, and go forward,” said Takakura.

Takakura’s counterpart, Bev Priestman, was pleased that her team earned a draw.

“We took a point from playing the host nation which I think is great. The team went to the very end to make sure we got that point. The finishers came on and I think they changed the game, so credit to them,” the Canadian mentor said, according to Canada Soccer.

Canada, after winning back-to-back bronze medals, has been vocal about “changing the color” of the medal, as repeated by Priestman, and is hoping to make history by being the first team to achieve the Olympic podium three times in a row.

This was the first match of the qualifying teams of Group E, and it took place at 7:30 p.m. in Hokkaido, without spectators. The Japanese team started training in Sapporo on July 18 to acclimatize. Despite being 800 kilometers north of Tokyo, the location had seen stifling temperatures during the day, reaching 35 degrees.

Japan is set to play against the U.K. on July 24, still in Sapporo. The following match, Japan vs. Chile, is scheduled to happen at Miyagi Stadium on July 27, the only location set to have spectators.

The real surprise of the day came from Sweden, which ended the United States’ 44-match unbeaten streak, winning 3-0 against the tournament favorite and reigning world champion.

“Did we expect this result tonight? No,” said U.S. forward Megan Rapinoe, according to The Associated Press, following the match. “It’s frustrating. I don’t remember the last time we gave up a goal. So to give up three is not great.”

With its strong defense, Sweden had managed to beat the U.S. before, for example in Rio 2016, when it beat the Americans in the quarterfinals, their earliest exit ever in the Olympics.

In matches earlier in the day, Brazil breezed past China 5-0 at Miyagi Stadium.

In the same Group E as Japan, Britain won against a tricky team, Chile, 2-0, with both goals by Manchester City’s Ellen White.

The Netherlands trampled Zambia in the evening match in Rifu, Miyagi Prefecture, a 10-3 rout in Group F, while Australia beat New Zealand 2-1 in Tokyo, with Tameka Yallop and Sam Kerr scoring one goal apiece.