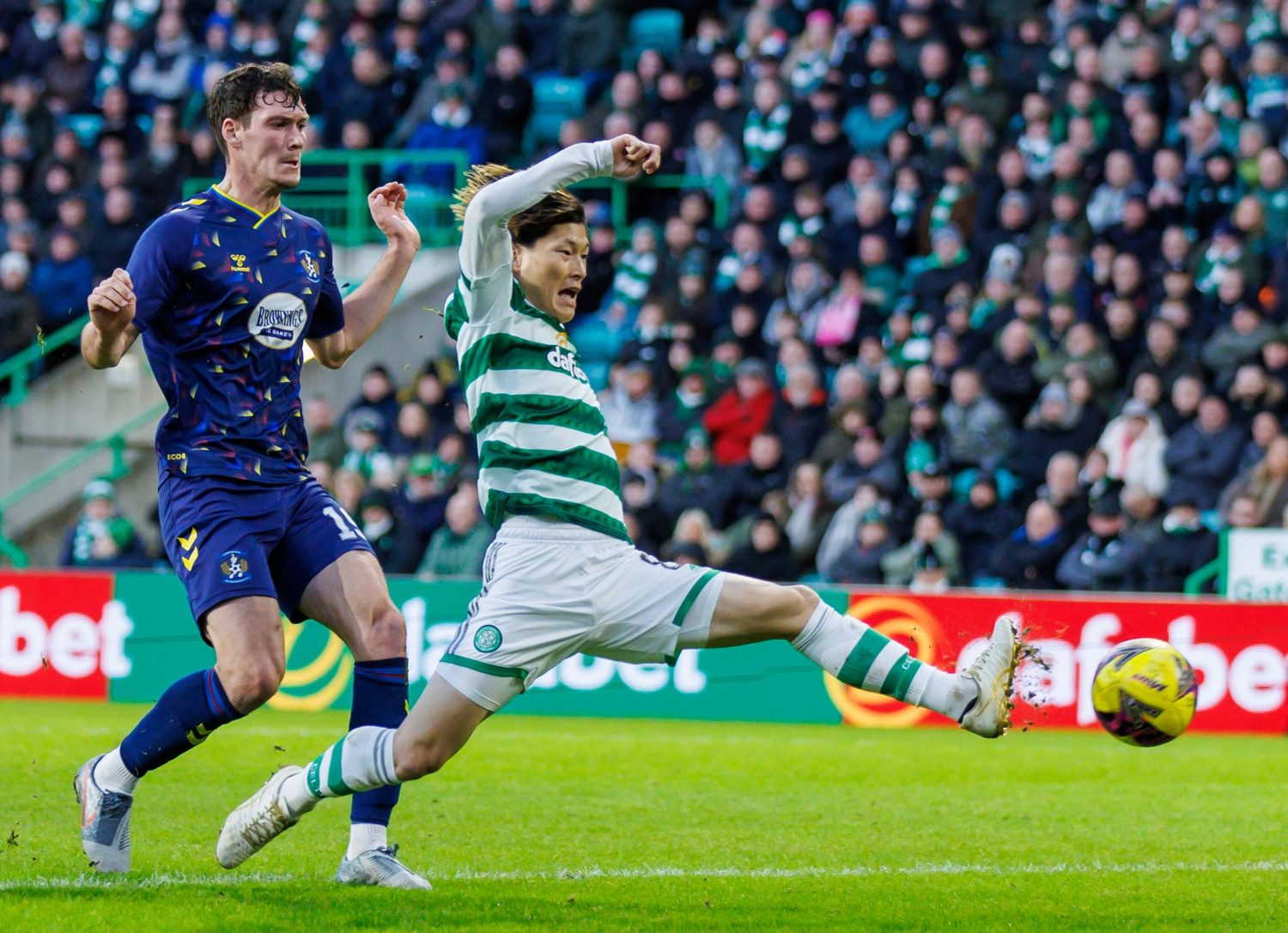 Celtic's Kyogo Furuhashi shoots in the first half against Kilmarnock on January 7 in Glasgow. (KYODO)

GLASGOW ― Twenty-two games into the 38-match league campaign, Celtic FC has a commanding nine-point lead over Rangers, its closest challenger, at the top of the Scottish Premiership. Add to that its healthy goal difference of plus 52 and you get the idea of how dominant Celtic has been on the home front.

A staggering 20 of these matches have been won, with just one defeat (away at St Mirren on September 18) and one draw (away at Rangers on January 2). It's a hectic pace for any rival to keep up with.


Overview Of This Season's Japanese Influence

Within this, three of the four Japanese stars who were with Celtic last season have been performing at a high level. Reo Hatate, Kyogo Furuhashi and Daizen Maeda are all firm fixtures in Ange Postecoglou's strongest starting lineup.

As was the case last season, Yosuke Ideguchi has had no luck staying fit. The midfielder suffered a preseason leg injury in July and has not played any minutes for Celtic this season.

While Ideguchi has been unfortunate, his compatriots are further enhancing their reputations in Scotland's top flight. It may not be long before all three are subject to the rampant transfer speculation that is present in soccer all year long. I'm sure clubs from some of the richer European leagues will have their eyes on Celtic's Japanese trio.

Let's dig deeper into the Premiership performance levels of Hatate, Furuhashi and Maeda so far in 2022-23.

With 20 appearances in the Premiership, the 25-year-old midfielder is fast maturing into the type of player all top teams like to have in their engine room.

Hatate, who has three goals and six assists, also contributes to the less heralded side of soccer by winning the ball consistently and retaining possession for his team. Amid the fast-paced and physical landscape of the game in Scotland, that is no mean feat for a player arriving from overseas.

As well as excelling in midfield, Hatate has proved to be versatile. He filled in at right back during an injury crisis for Celtic's fullbacks in a game against St Johnstone on December 24. That day he scored two goals and turned in a man-of-the-match performance despite playing out of position.

"Reo has set the bar pretty high for the other fullbacks," Postecoglou said to Celtic TV. "It's a credit to Reo, he had to be really disciplined."

The manager added, "I had to be creative with it but the way we play, we thought he was disciplined enough and gave us something going forward."

Hatate, who usually plays in a midfield three beside club captain Callum McGregor and Matt O'Riley, had some extra responsibility when McGregor missed a handful of matches with injury. Minus McGregor, it was Hatate who was asked to play more centrally, therefore becoming even more involved in controlling the tempo of Celtic's play.

With extra trust being shown toward him, and his consistent performance level in all aspects of midfield play, Hatate is a player Celtic may receive a high transfer fee for one day. For now, he continues to impress. He may end up winning Player of the Year recognition within Celtic and the Scottish Premiership come the end of the season.

Seventeen goals in 20 matches are a superb return for any forward in any league. Furuhashi currently leads the race to be the top goal-scorer in Scotland this season. Lawrence Shankland of Hearts (16), Antonio Colak of Rangers (11) and Bojan Miovski of Aberdeen (11) are his closest pursuers.

Furuhashi has remained fit this season and has continued to demonstrate his finishing prowess. If he stays fit, he could get close to 30 goals this season ― that would be quite an achievement for a non-penalty taker.

With Celtic's squad containing several striking options, there was early season discussion from some quarters within the Scottish media questioning whether or not Furuhashi would be rotated in and out of Postecoglou's starting lineup.

That has not happened ― it's clear from the team selections that Furuhashi is his manager's first-choice central striker.

Before the game against Rangers on January 2, Postecoglou was asked to comment on some media reports of Furuhashi going through a "lean spell" in front of goal.

"I have just got to check and research when his lean spell was," Postecoglou said in response to the question according to The Celtic Way. "There must have been 20 minutes I missed. All I know is that from the moment he arrived, the guy has just been scoring goals and causing headaches to opposition teams."

The statistics certainly back up that assessment.

Furuhashi's goals-to-minutes-played ratio tells us that he scores once every 66 minutes he is on the field in the Scottish Premiership. Eight of his goals have been scored at home, with nine away. Consistent and dangerous in any stadium.

Furuhashi is the best finisher in the Scottish Premiership. He hits the target with 61% of his efforts on goal.

Sometimes starting, sometimes coming off the bench, Maeda is further enhancing his reputation as one of the hardest working forwards Scottish football has ever seen.

The only one of Celtic's Japanese contingent to make the Samurai Blue squad for the 2022 FIFA World Cup in Qatar, Maeda has healthy competition at club level to get a starting place.

With other wide forwards Sead Haksabanovic, Liel Abada and Jota in the mix for selection, Maeda has started 13 of his 20 appearances in the Premiership this season. The other seven have seen him brought on as an impact substitute.

Celtic's manager has nothing but praise for his hard-working forward. "I obviously coached Daizen in Japan so I know what I was bringing," Postecoglou said to The Glasgow Evening Times in December. "He is such a selfless team player.”

The Celtic boss added, "He just does the stuff that doesn't often get the recognition ー the amount of work he puts in, the running, sometimes for little reward. He doesn't complain ― he's a willing runner for his team."

As well as giving his all physically, Maeda's mental strength has been praised by his manager. "With chances, if he's missed one it doesn't deter him," Postecoglou continued in his Glasgow Evening Times interview.

"I saw that in Japan when I first coached him, and I love that about him more than anything else. Just that really strong mentality to continually do what's right for the team irrespective of what's gone on beforehand."


Looking To The Future

There's still a bit of work for Celtic to do to secure the league title. Rangers have recently had a change of management, and look a far more determined team for it. The Celtic rival will not give up its chase.

Celtic's Japanese players will need to continue working until they can't be caught at the top of the league table.

The fact that only Maeda made Japan's World Cup squad is maybe more of a reflection on the league the players are operating in rather than their overall abilities. Yes, they play for a massive club, but the overall standard of soccer in Scotland's top flight isn't as challenging as elsewhere in Europe.

To further improve, perhaps Hatate, Furuhashi and Maeda will one day need to move on from Celtic.

As the January transfer window opened earlier this month, Celtic confirmed two new arrivals from Japan. Central defender Yuki Kobayashi was signed from Vissel Kobe, while midfielder Tomoki Iwata has joined on loan from Yokohama F Marinos. Iwata's transfer will be made permanent in the summer.

At the time of this writing Kobayashi has made one appearance in the Premiership ― enjoying a comfortable debut in a 4-0 win over St Mirren on January 18. Iwata has yet to feature for his new team.

Perhaps Celtic is anticipating some of its established players will move on to new clubs this summer, and is rebuilding proactively with the next generation of talent from Japan.

After Postecoglou opened the pipeline last year, it seems more Scottish Premiership clubs might look to Japan for player recruitment.

Morrison is a freelance sportswriter. Writing since 2016, his byline appears on boxing website NYFights.com and multi-sports platform Spitballingpod.com. His main areas of interest are boxing, soccer, golf and rugby union. Find his stories on SportsLook. Morrison is from Scotland and can be found on Twitter @Morrie1981.