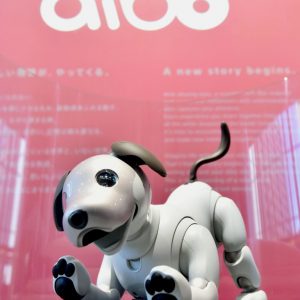 The Sony Group homes for senior citizens is now offering robot therapy using the robotic dog aibo. It hopes that aibo will not only compensate for the manpower shortage, but, as a member of the eldercare family, also help alleviate dementia symptoms among the elderly residents.

The market for this therapy is predicted to expand as society ages. Robot therapy is known to mitigate dementia and other symptoms of aging when elderly patients enjoy interaction with the robot through singing, dancing, and conversation. The aibo has a friendly personality, well-suited for use in robot therapy. The robot expresses emotions by barking and other vocalizations, and by cuddling its “owner,” just like a real pet does.

Within the Sony Group, Life Care Design is involved in the business of aging care as a subsidiary of Sony Life Care. Life Care Design has introduced aibo into three different “Sonare” brand locations since April for the purpose of robot therapy. The aibo will also be introduced into planned new facilities in the future.

In one of the facilities into which aibo was recently introduced, the atmosphere is said to have changed dramatically. The aibo’s presence promoted increased interactions and conversation from residents, including comments directed at aibo, such as, “Who’s a good boy?” and “What are you going to do today?”

Specialized methods to measure the effects of aibo-based therapy are also being employed at a different facility, which is participating in a year-long study on the effectiveness of robot therapy. The study runs until March 2019.

The recent manpower shortage for staffing facilities providing eldercare has highlighted the limits of human-based care for senior citizens. While partial reliance on robots for eldercare has also drawn criticism as being cold-hearted, expanded robot use would lead to a reduced burden on staff on the ground.

“Palro,” the well-known pioneer of robot therapy from Fujisoft Inc., has already been introduced into more than 1,000 facilities. In these facilities, Palro is delivering results in the alleviation of dementia symptoms by being a part of elderly residents’ recreation, singing songs and other interactions.

In the future, communication robots such as Palro and aibo are set to become increasingly prevalent as the aging of society continues. The Yano Research Institute predicts a tenfold increase in the scale of the domestic market, from approximately ¥850 million in 2014 to approximately ¥8.7 billion in 2020.