[Speaking Out] A Proposal to Rescue U.S. Carriers from the Coronavirus Infection 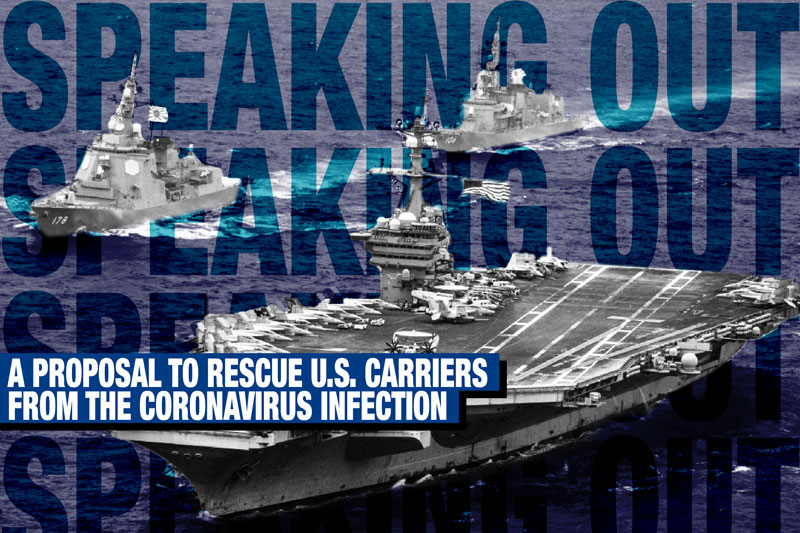 Crewmembers aboard the Theodore Roosevelt and three other United States Navy nuclear-powered aircraft carriers have been found infected with the novel coronavirus.

Given that U.S. carriers engage in important operations to deter threats from China, North Korea, Iran, and elsewhere, the spread of the virus infection could seriously affect security throughout the world, including the Indo-Pacific region. So I have proposed to U.S. experts the use of hypochlorous acid water for preventing the infection. And I received a positive response.

Effective in the Three C’s Environment

Hypochlorous acid water is prepared from sodium hypochlorite, produced through the electrolyzation of salt water and mixed with citric acid to become slightly acid. In such a form, hypochlorous acid can demonstrate the strongest disinfecting power without affecting human health, according to many published studies.

I have even toured an aircraft carrier in San Diego, California, the home port of the Theodore Roosevelt. While the captain is given an elegant cabin that looks like a VIP room, lower-ranking crewmembers are assigned to smaller rooms.

Many crewmembers use multiple bunk beds, similar to those on former Japan Railways’ “Blue Train” sleepers. Crewmembers have no choice but to live in an environment featuring all of the so-called “three Cs”: confined spaces without windows, crowded sleeping spots, and close contact with each other.

One infected crewmember could quickly spread a virus to others, causing a cluster infection. The circumstances on less-spacious nuclear power submarines is likely the same. Such environments are worse than that on the Diamond Princess cruise ship which, despite having individual rooms for passengers, saw the coronavirus infection spread widely during the ship’s stay at a Japanese port earlier in 2020.

Hypochlorous acid water can be used for killing viruses contained in micro droplets drifting inside an aircraft carrier. It may also be useful for sterilizing masks and goggles to prevent droplet infection.

Unlike sodium hypochlorous (a water purification chemical), hypochlorous acid water does not have to be accompanied by the use of rubber gloves, or washed away from hands, either.

Indeed, hypochlorous acid water may be the most effective means for preventing infection on aircraft carriers.

I sent an email to top members of the Information System on Occupational Exposure, operated jointly by the International Atomic Energy Agency (IAEA) and the Nuclear Energy Agency of the Organization for Economic Cooperation and Development (OECD/NEA), proposing the use of hypochlorous acid water for nuclear power plants and aircraft carriers. In an immediate response, an American member said my proposal would be conveyed to the U.S. Nuclear Regulatory Commission and the head of a think tank for the Department of Defense.

Just after the 2011 Great East Japan Earthquake, the U.S. aircraft carrier Ronald Reagan based in Yokosuka, Japan, joined disaster relief operations under so-called Operation Tomodachi (“Operation Friendship”), for which we are still very grateful. Now it is one of the four U.S. aircraft carriers on which the novel coronavirus infection has been found.

I would like to repay the United States for their help during Operation Tomodachi, and one way to do so is by proposing this coronavirus infection prevention measure.

(A version of this article was first published by the Japan Institute for National Fundamentals, Speaking Out #673, on April 16, 2020.)