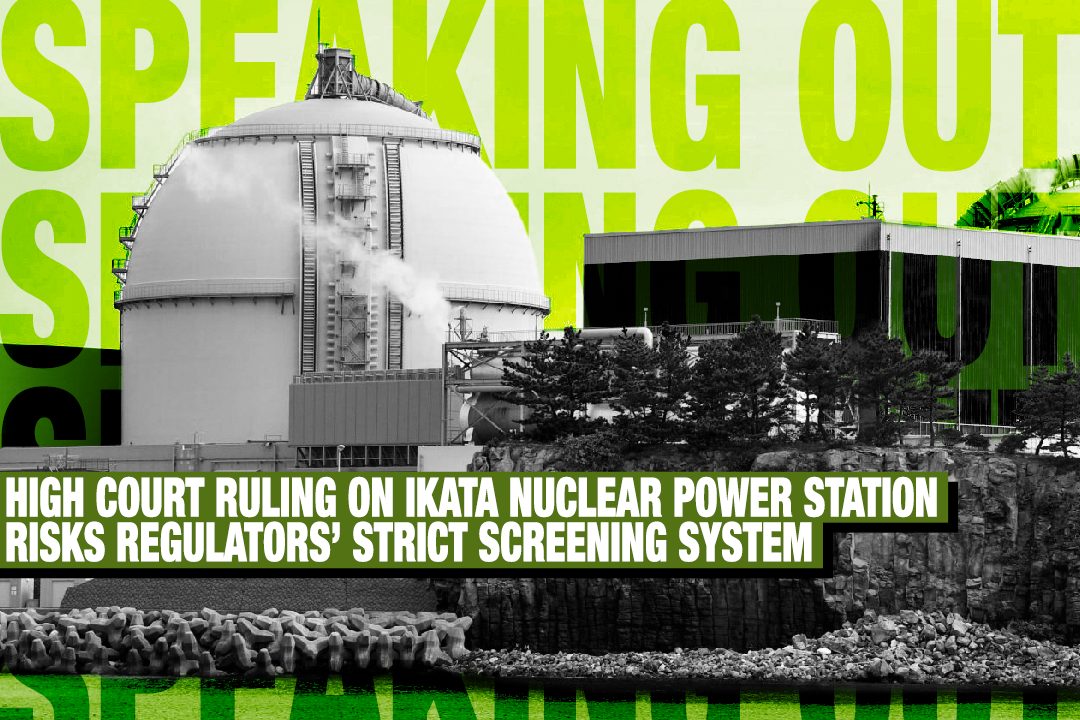 Of the three judicial decisions on nuclear plant operations in Japan in the past two years, one supported the continuation of operations and two, including the latest one, ordered their suspension, indicating that Japan’s judicial sector is wandering over the matter. As the electricity supply constitutes life base and industrial and economic infrastructure, risks created by this judicial behavior are now threatening this critical infrastructure.

Unit 3, which has suspended operations since December 2019 due to regular checkups, is set to remain shut down — unable to restart legally under the court decision. Shikoku Electric branded the decision as unacceptable and vowed to promptly take steps to appeal the ruling.

Regarding the latest court decision ordering the suspension of nuclear reactor operation, I would like to point out that the appeal represents an abuse of “personal rights.”

According to Japanese Civil Code guru Akio Morishima, Professor Emeritus of Nagoya University, “personal rights” should be applied only in the presence of a truly imminent danger, but not unduly. Unit 3 of the Ikata Nuclear Power Station cleared safety screening under the world’s toughest regulations and was confirmed safe in pre-operation tests before its restart.

This means that the nuclear plant poses no imminent or clear danger to the three Yamaguchi Prefecture appellants, or to any other people.

Under the safety regulations, including measures against severe accidents (involving reactor core damage), the likelihood of a grave, severe accident in a year for a nuclear reactor in Japan has declined to around one-10 millionth, according to risk assessment by an expert panel of the Atomic Energy Society of Japan.

Next, I would like to point out that the High Court intruded into the safety screening by the Nuclear Regulatory Authority, which is an independent, powerful administrative organization established under Article 3 of the National Government Organization Act. The court criticized the NRA’s safety screening regarding potential active faults as including errors or shortfalls. Then, the court’s 88-page written decision on the suspension order was issued after only one opportunity for interested parties to make presentations. On that basis, it denied the NRA’s judgement approving the nuclear reactor’s safety after the authority’s overly strict examination — an examination which involved 400,000 pages of documents (to include papers for construction approval), and consumed a massive amount of time and manpower.

Article 2-2 of the Atomic Energy Basic Act provides that safety shall be assured to contribute to the protection of people’s lives, health, and assets to environmental conservation and to Japan’s national security, taking into account established international standards.

The court decision adopts a very tiny minority view that the Sea of Iyo in the western Seto Inland Sea facing the power station may include active faults. As for a potentially large-scale eruption of Kumamoto Prefecture’s Mount Aso some 130 kilometers from the power station, no consideration is required to say that an eruption would be five to six times larger than assumed by Shikoku Electric.

Nevertheless, the court decision fully endorsed the appellants’ complaint that the assurance of safety from a huge earthquake is insufficient.

Is such a judicial decision fair? Is any judicial decision allowed to reverse the results of a strict safety screening by an independent regulatory authority based on the legal system for administrative procedures?

This case appears to indicate that the way Japan’s judicial sector works must be fundamentally reformed.

A version of this article was first published by the Japan Institute for National Fundamentals, Speaking Out #652 (Special) on January 23, 2020.