[Speaking Out] Listen to True Public Opinion on Nuclear Energy Use 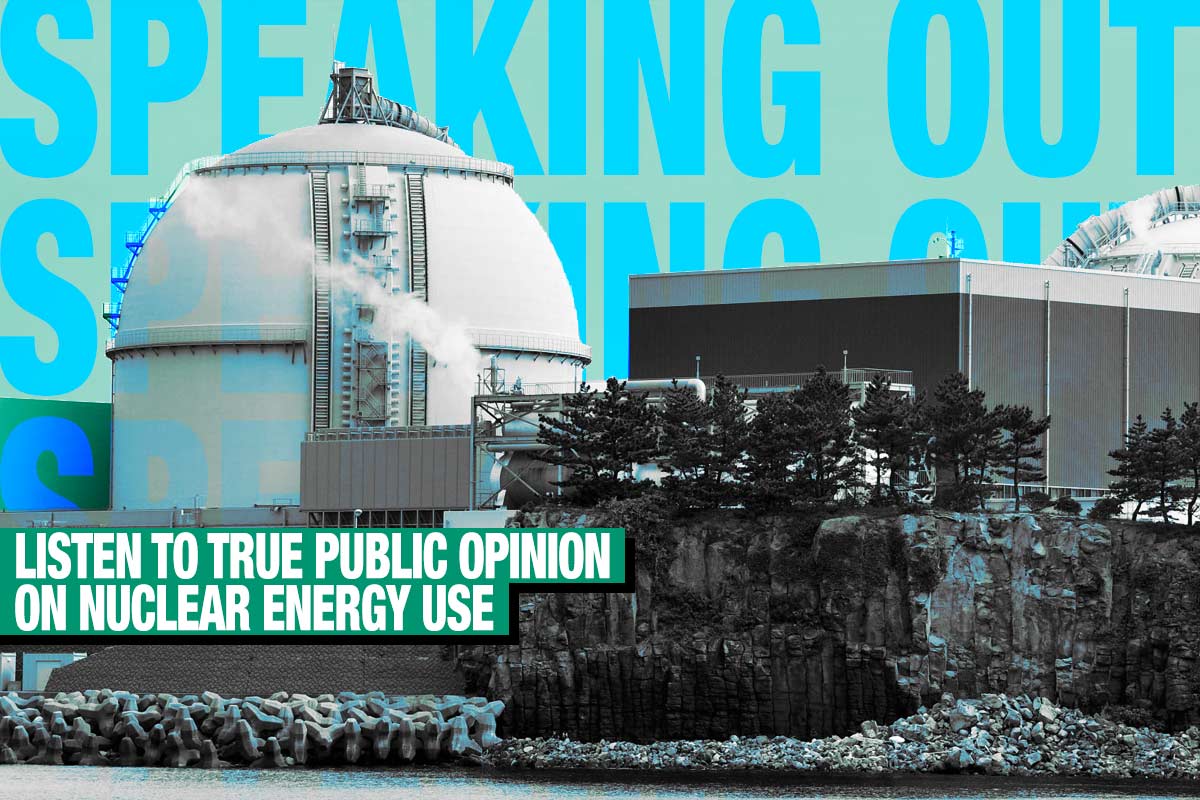 Japanese Prime Minister Yoshihide Suga has announced a target of cutting Japan’s greenhouse gas emissions in fiscal 2030 by 46% from fiscal 2013. The conventional wisdom is that not only the usage of existing nuclear power plants but also the construction of new and additional plants and the replacement of old reactors would be indispensable for achieving the target.

Nevertheless, nuclear energy’s share of a target power mix for fiscal 2030 in the government’s Strategic Energy Plan now under review is reportedly expected to remain unchanged from the current target level.

In addition, solar PV and wind power generation facilities are accompanied by landscape destruction, landslides, fishery destruction and other problems. Given Japan’s natural conditions, including frequent typhoons and other storms, Japan has no large spaces to install more solar PV panels or windmills.

The national government seems hesitant about being clear on the utilization of nuclear power plants. Particularly, Economy, Trade and Industry Minister Hiroshi Kajiyama and Environment Minister Shinjiro Koizumi, who should take on the leadership, have made only vague remarks about nuclear energy.

They may be reluctant because they fear a backlash in public opinion. But the problem is rather which public opinion they should weigh heavily.

Lack of political action may persist as long as politicians pay attention to nationwide public opinion polls conducted by major news media using leading questions. To break through the situation, politicians need to look to public opinion in local communities that are likely to cooperate with the utilization of nuclear power plants.

Included among them must be Fukui Prefecture, which has accepted a number of nuclear plants. In Japan that has adopted indirect democracy, the most important public opinion is shown by election results, and the remarks of governors, prefectural assemblies and mayors elected by voters could be deemed as reflecting popular will.

On April 23, the Fukui prefectural assembly passed an opinion in writing for restarting three nuclear reactors aged more than 40 years in the prefecture. It voted down a resolution for more prudent deliberation on the matter, effectively endorsing their restart.

In response to the opinion, Fukui Prefecture Governor Tatsuji Sugimoto, who had conditioned his consent for the restart on the central government’s clarification of its nuclear energy policy, held a meeting with METI Minister Hiroshi Kajiyama on April 27, at which the minister gave assurances that the national government would continually use nuclear energy into the future.

On April 28, Sugimoto became the first prefectural governor in Japan to announce the local government’s consent to the restart of nuclear reactors that had first launched their operation more than 40 years ago.

Mihama Mayor Hideki Toshima welcomed the consent as a significant decision that would greatly contribute to promoting the nation’s energy policy. Takahama Mayor Yutaka Nose said that he was relieved to hear the announcement as the four nuclear reactors (including Units 3 and 4 in operation) in Takahama have a significant impact on the local economy and public finance.

Politicians Should Explain the Significance of Nuclear Plants

It is one-sided and discourteous to view local communities as having been tempted by local economic promotion measures into accepting troublesome facilities. As a Fukui Prefecture citizen, I would like to note the local communities are proud of having cooperated willingly with the national government’s nuclear energy policy that is indispensable for Japan’s energy security, as indicated by Mayor Toshima.

National politicians must proudly explain the significance of nuclear power plants in response to cooperative communities calling for the national government’s clarification of its nuclear policy. Those failing to do so should be disqualified as politicians.

(A version of this article was first published by the Japan Institute for National Fundamentals, Speaking Out #791 in Japanese on May 17, and in English on May 20, 2021.)

Yoichi Shimada is a senior fellow and Planning Committee member, Japan Institute for National Fundamentals, and a professor at Fukui Prefectural University. Find him on Twitter, here.