[Speaking Out] National Diet Should Debate Constitutional Amendments During Recess 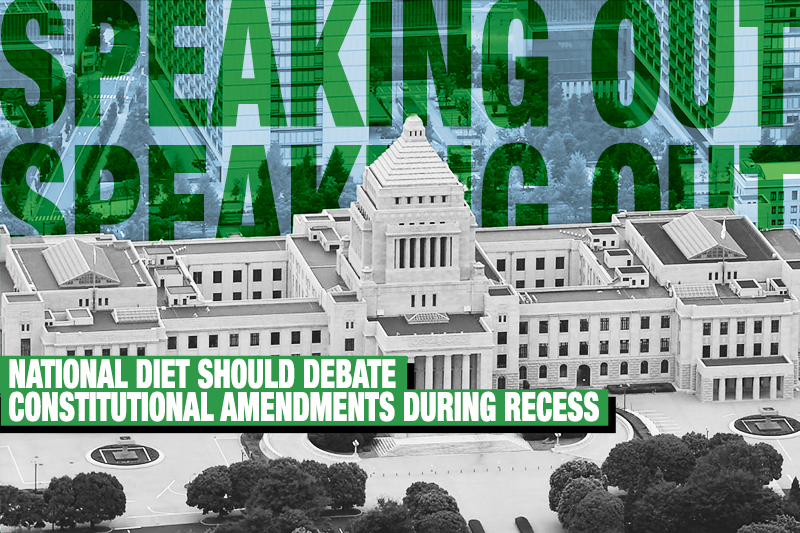 While the National Diet ended its ordinary session on June 17, the Constitutional Democratic Party of Japan (CDP) and other opposition parties had requested to extend the session. The ruling Liberal Democratic Party (LDP) rejected the request, but plans to hold Diet meetings even during the recess, if necessary.

If so, the two National Diet chambers’ Commissions on the Constitution should meet during the recess to promote deliberations on stalled issues, including a pending revision of the National Referendum Act for constitutional amendments.

When the National Diet passed a budget for the current fiscal year in late March, the LDP, its coalition partner Komeito, and the Japan Innovation Party called for convening meetings of the Commissions on the Constitution, which were set up to consider constitutional amendments and other relevant matters.

However, major opposition parties, such as the CDP and the Democratic Party for the People (DPP), have refused to hold such meetings, citing as reasons the need for urgent measures to address the novel coronavirus outbreak. The reason was unreasonable because they agreed to convene other National Diet standing committees for ordinary deliberations.

In the first place, if the novel coronavirus outbreak was a top priority, the commissions should have been convened to consider appropriate topics, such as state of emergency laws, including new constitutional provisions.

Due to the refusal of opposition parties to cooperate, the commissions’ meetings during the just-ended ordinary Diet session were limited to only one at the House of Representatives.

Unlike the former research commissions on the Constitution designed for research into the Constitution, the main job of the current commissions includes the drafting of constitutional amendments and deliberation over the National Referendum Act. They are decision-making bodies, rather than research panels. Therefore, they have adopted majority rule.

Since the traditional practice of giving priority to agreement between ruling and opposition parties has been adopted for the operation of the current commission, however, there has been an abnormal situation in which the commissions are unable to meet without the consent of opposition parties. Opposition parties have rejected the convocation of meetings for unreasonable reasons, running counter to the practice of avoiding political wrangling long-held since the days of the Research Commissions on the Constitution.

As a result, a bill for revising the National Referendum Act to increase the number of voting stations to meet the revised Public Office Election Act has been left on the shelf for two years, despite effective agreement reached between the ruling camp and opposition parties, except the Japanese Communist Party.

The LDP, a cowardly ruling party, as well as opposition parties, is responsible for this deficiency. The LDP has won a series of national elections by pledging to amend the Constitution, but it has no guts to meet voters’ expectations.

There is a limit to voters’ patience. While opponents of constitutional amendments are desperate to block them, the LDP — even with a dominant majority — has failed to push such amendments. Are LDP members willing to be defeated without fighting?

In the face of the national coronavirus crisis, the Commissions on the Constitution should launch debate promptly on the development of state of emergency laws and constitutional amendments in preparation for the second and third coronavirus waves.

According to the rules for each of the commissions, its chairman is empowered to convene its meetings by fixing dates — whether the National Diet is in session or not (Articles 8 and 9-1), or must convene meetings if requested by one-third or more of the commission members (Article 9-2).

To fulfill its duties, the commissions should meet as frequently as every week to discuss constitutional amendments to recover from the past delays.

(A version of this article was first published by the Japan Institute for National Fundamentals, Speaking Out #690, on June 16, 2020.)

Akira Momochi is a director of the Japan Institute for National Fundamentals and a special professor at Kokushikan University.