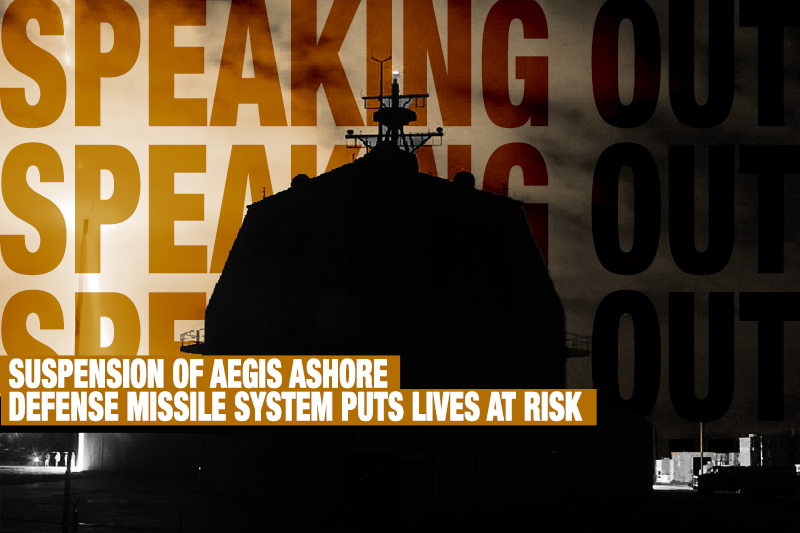 On June 15, Japanese Defense Minister Taro Kono announced the Japanese government would suspend a plan to deploy Aegis Ashore ground-based air defense missile systems in Yamaguchi and Akita prefectures, as it could not be guaranteed that boosters detaching from missiles after firing would be dropped accurately within training ranges of the Ground Self-Defense Force (GSDF).

On the one hand, if adversary nuclear missiles hit Japan, hundreds of thousands, or possibly millions of lives would be lost. On the other hand, the probability is not zero, but extremely close to zero, that after a missile is fired, the empty booster tank less than two meters in length would hit a private house.

The question is which loss would be viewed as more significant.

Japan has not cancelled the Aegis Ashore plan, said David Helvey, Deputy Assistant Secretary of Defense for Indo-Pacific Security Affairs. “Our focus is on having technical discussions.”

Former Defense Minister Itsunori Onodera proposed that Aegis Ashore systems be mounted on used ships of the Maritime Self-Defense Force. However, the installment of an Aegis system with heavy radar on top of an old destroyer could raise the gravity center of the ship and make the ship vulnerable to capsizing.

A more promising proposal might be that only a missile launcher be installed on an offshore facility to avoid the falling booster problem. A missile launcher at some distance from radar and command and control systems would cause few problems. In fact, the United States Navy’s Cooperative Engagement Capability (CEC) allows a launcher on a ship to intercept an adversary missile detected and tracked by a radar on another ship. The JDS Maya, Aegis destroyer put into service last March, has this capability.

An active MSDF officer complains that he urgently departed from port aboard a ship on information of possible ballistic missile launch from North Korea, spent several months at sea, and when he finally went home he found his bed moldy. MSDF ships are supposed to be deployed after sufficient repair and maintenance services, and crewmembers’ education and training.

However, MSDF ships are frequently forced to depart from port for urgent missions without sufficient education and training, as there is no time.

In 2017, U.S. Navy Aegis destroyers were involved in three accidents, including collisions with private vessels and a grounding. The successive accidents were attributable to the lack of personnel and readiness, retired Vice Admiral Joseph P. Aucoin wrote in an article published in the June 2018 U.S. Naval Institute Proceedings magazine, after he was dismissed as the commander of 7th Fleet to take responsibility for the accidents.

If the suspension of the Aegis Ashore deployment plan works to increase burdens on crewmembers of Aegis destroyers at the core of Japan’s missile defense, relevant service persons may resign one after another, further aggravating personnel shortages and adversely affecting Japan’s missile defense preparedness.

Which is more significant, the booster problem or national security? This weighty question faces politicians.

(A version of this article was first published by the Japan Institute for National Fundamentals, Speaking Out #692, on June 24, 2020.)

Fumio Ota is a senior fellow and a Planning Committee member at the Japan Institute for National Fundamentals. He is a retired vice admiral of Japan’s Maritime Self-Defense Force.