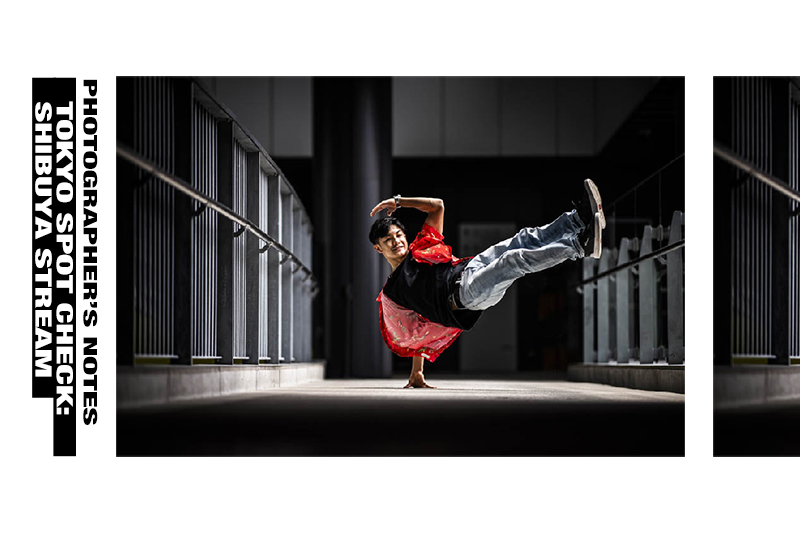 As a photographer, I must say I feel pretty lucky being able to use such a massive city as Tokyo for my photographic sandbox. With each ward in Tokyo having its own unique feel and vibe, you can spend years exploring the city and still never really see everything.

One reason for this is the sheer size of the city (Tokyo, all 2,194 square kilometers of it, has a population of over 13.9 million people). Another is the city is in a constant state of flux and evolution. When you think you have seen it all, a new complex opens up, or a new skyscraper is completed, giving us photographers yet another place to explore and devour with our cameras

One such place is the Shibuya Stream area located right beside Shibuya station. With its grand opening in September 2018, it is one of the youngest areas in the ever changing city of Shibuya. I actually had the opportunity to shoot a few action sports events in the Shibuya Stream’s central square area in 2019, and really fell in love with the whole place. But I was busy shooting the events, so didn’t have too much time to explore at that time.

Since then, I have been hoping to grab someone to shoot there, but found myself quite busy. Then the lockdown hit, so street shooting was put on hold for obvious reasons. But with the lifting of restrictions, I thought it would be fun to head down and explore the area with my friend and amazing breakdance B-Boy Shigekix, especially before it gets too busy.

The way Shibuya Stream is constructed allows for beautiful natural light to come in, so I decided before even leaving the house that I would not use my strobes and try to find the best light I could. Makes shooting much lighter and quicker as well, which is always a bonus when shooting something with action in the streets.

When you first arrive at Shibuya Stream from Shibuya station (they are actually now attached on the second floor of the station), you come to a wide open area that is mainly used for foot traffic — but it is way bigger than it needs to be.

As the light was nice, but the area rather simple, I decided to start with some nice up-closer types of portraits of Shigekix to get us both relaxed and warmed up for the shoot. With trains running past the outside of Shibuya Stream here, it can be a little hard to communicate. But I really liked the structure of the area as a backdrop for the portraits. 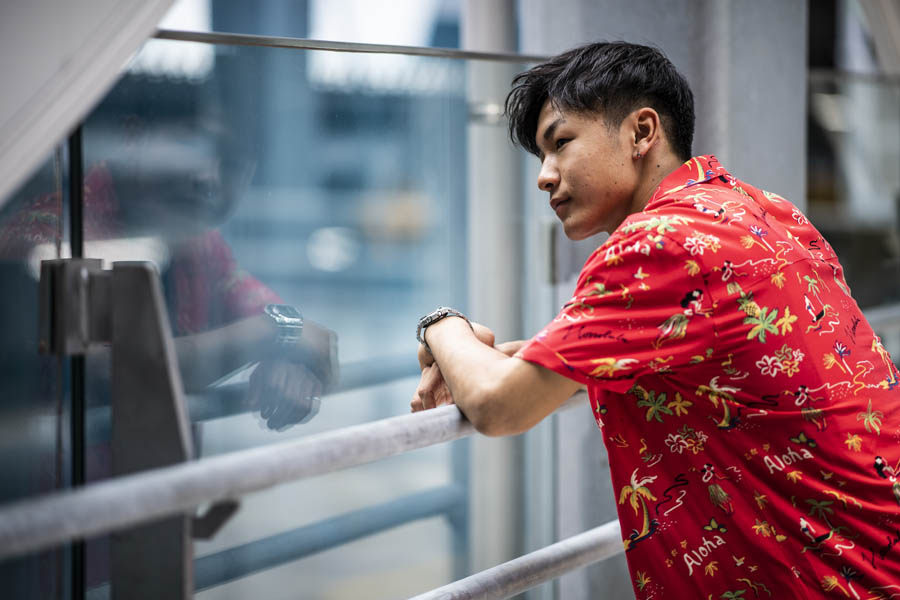 From there, I had no real plan, so we just started to wander through the complex.

Shibuya Stream has several different layers to it, so when we saw an escalator I decided to head up and see what we could find. Just outside the upper floor of Starbucks, there was a small bridge getting hit with a great blast of natural light from the camera’s right. Nice!

Looking around it seemed this place had very little foot traffic, so I decided to try to get Shigekix to perform some cool freezes. Shooting on his countdown, each freeze he performed gave us a great image. But this image here is my favorite, as it has the most dynamic movement and is a freeze I have not actually taken before. 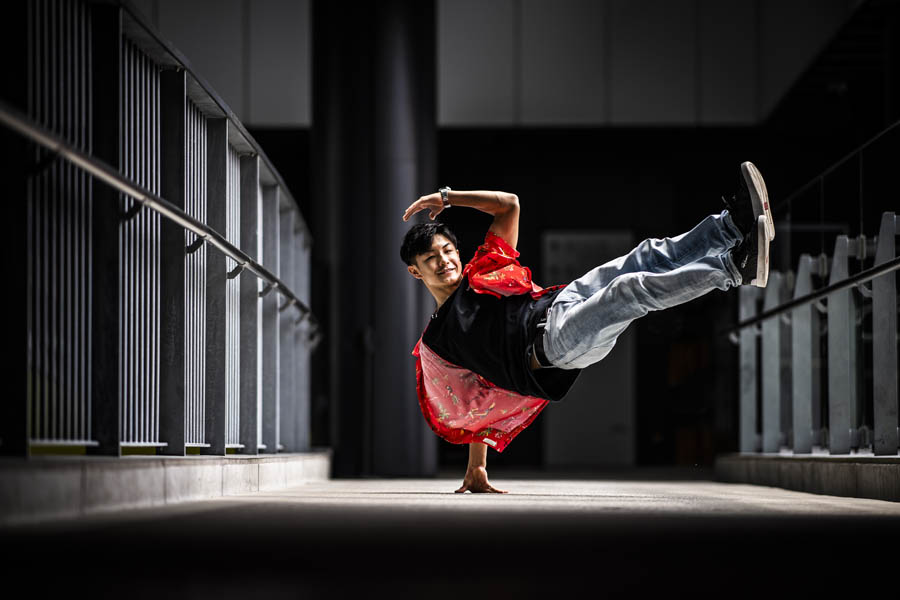 After a few minutes, I knew we had some great shots, so time to move on! Walking across the bridge Shigekix was performing on, I noticed a big glass wall one floor down and thought it perfect for our next location.

Although I did try shooting from the upper floor down, I wasn’t really able to get an image I was super happy with, so after a couple of quick tries I decided to join Shigekix on the lower floor. I do enjoy multi-layered complexes like this, as you can often find great angles when shooting from above, but I just couldn’t get a great shot this time. I didn’t want to waste too much time trying as there was still so much left to explore.

Having arrived on the lower floor I noticed the glass wall was a perfect spot to play with some reflections when shooting some more portraits. I love using reflections in my work as it adds a second layer or element to your shots, and when done right, it can be super cool. Plus Shigekix’s red shirt really popped here, so win-win. 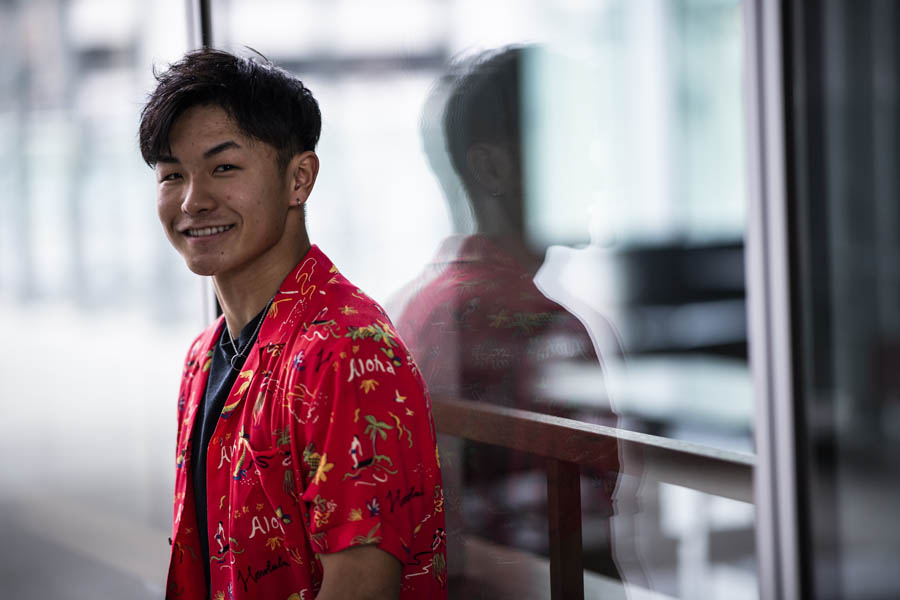 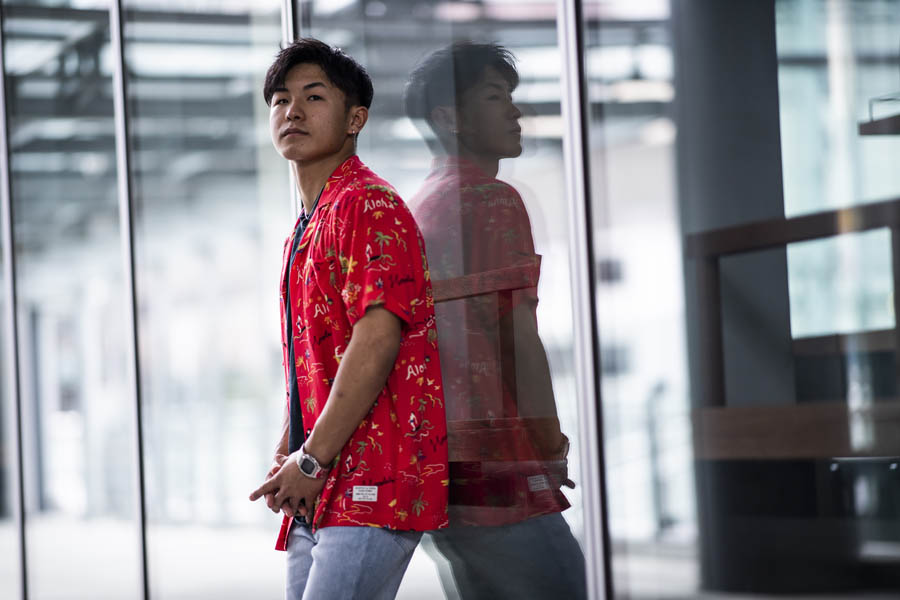 Of course, I had to get another action shot with such a cool and clean background for me to play with. Shooting with my Nikon 105mm/1.4 prime lens meant it took a few tries and a lot of moving around to get the best angle, but in the end I really like the balance between Shigekix’s body and the background in the shot you see here. Plus his smile makes it look so easy, but I know I will never be able to perform a freeze like this in my lifetime, haha! 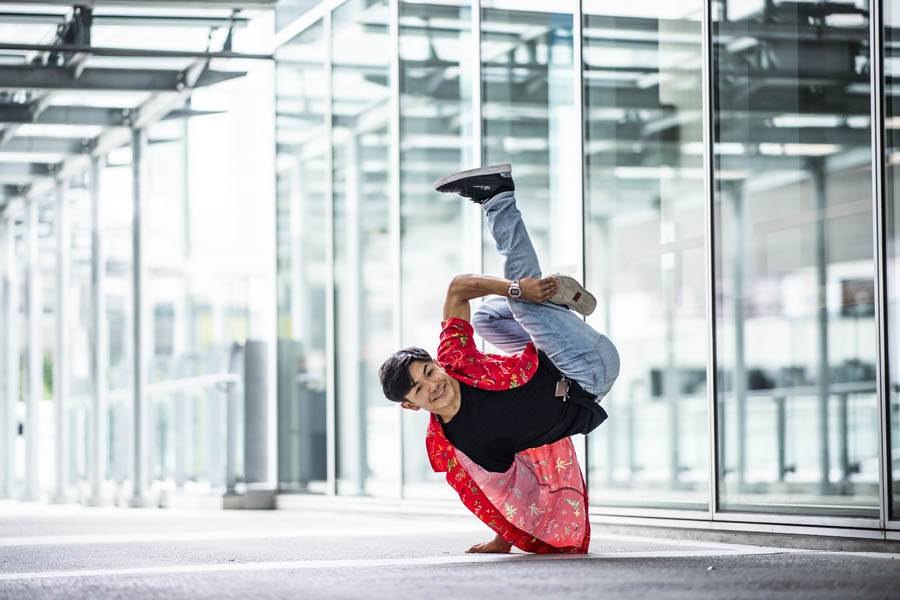 Also, shooting with a 105mm focal length and getting this wide of an image means I need to be quite far back from the action. It also means we were taking up quite a lot of space. Actually, we were taking up the entire walkway you see here. But one thing I love about shooting around Japan is you find that 99 times out of 100 people are so kind and polite they will almost never just walk right through your shot (to a point) and will often apologize for disturbing you.

I always make sure to watch out for people and tell them to please don’t worry about us as I want to be in the way as little as possible. Still, it’s always nice to see the consideration of random people when shooting in Japan.

Shooting Along the Stream

From here I decided to head out of the shopping area and go down along the stream portion of Shibuya Stream. There is actually a small waterway that stretches a few blocks down the street, with some small shops, cafés, and places to sit and relax along the way. You can often see people along here enjoying a coffee or a book. And even though it is in the middle of Shibuya, it’s a surprisingly quiet and peaceful oasis in the concrete jungle of Tokyo.

As we walked along, I noticed a cool concrete bench and thought it would be fun to get Shigekix to perform a couple freezes on it. Changing to my Nikon 24-70mm/2.8 lens, I decided to get in really close to exaggerate his movement a little. With breakdancing and other “action sports,” getting wide and close is often a great way to show action, as it is a position most people never see themselves in. This makes it a unique and different photo.

Thanks to Shigekix’s amazing skills, and balance, we got the shot you see here. And although at first I would have preferred to see his hand on his hip better (which I did shoot afterwards), we both seem to prefer this image in the end. 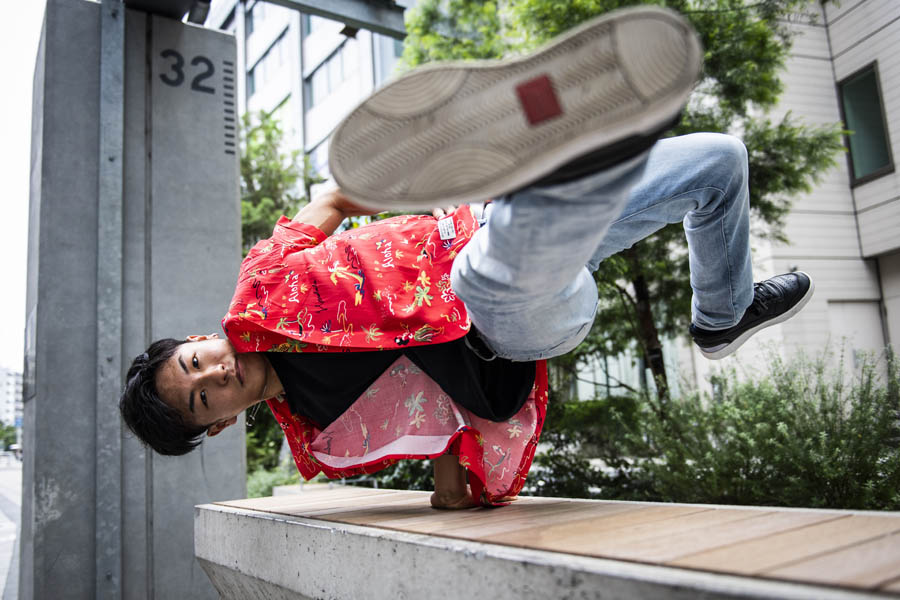 Although we did move on to shoot a few different locations that day, this was our last shot in the Shibuya Stream area.

If you find yourself in Tokyo and looking for a new place to explore and photograph, I suggest checking this area out. Not only is it great for natural light shooting, there are lots of great restaurants and cafés as well. I think my favorite is the burger place The Great Burger Stand on street level. If you like burgers, you will love this place!

OTHER ARTICLES IN THIS SERIES: