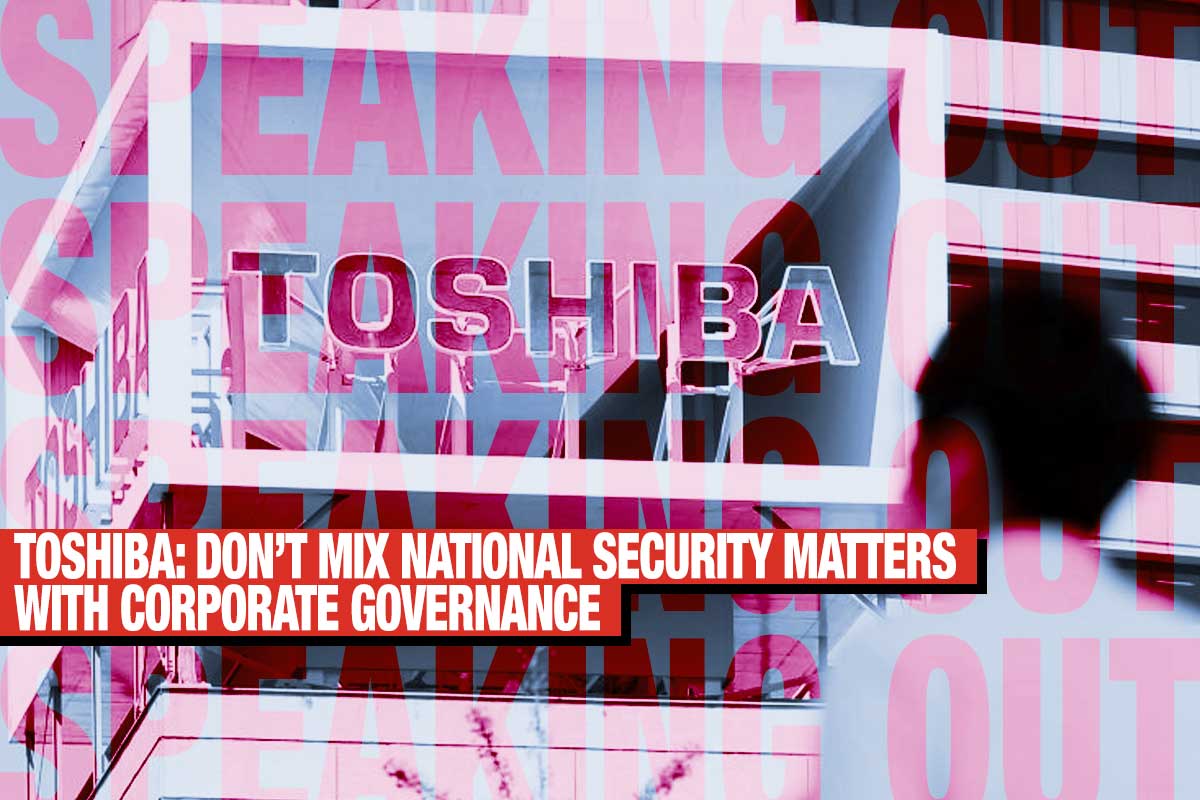 The report from an outside investigation on Toshiba Corporation recently came out, concluding that the company unfairly managed its general shareholders’ meeting last year. As requested by Toshiba, the Japanese Ministry of Economy, Trade and Industry took advantage of the Foreign Exchange and Foreign Trade Control Act to intervene on behalf of management to block proposals from activist shareholders, according to the report by a group of lawyers.

However, we should not be misled by media reports taking the investigation’s report for granted, but view realities calmly.

The investigation was conducted by lawyers selected by activist shareholders. Thus the lawyers cannot be viewed as objective third parties. The investigation report indicates that investigators only made unilateral speculation based on massive Toshiba e-mail data ー without checking facts.

RELATED: EDITORIAL | Toshiba Management Must Put a Stop to the Turmoil


Concerns About Technology Leakage to China

Some critics say METI should be held accountable for details of the incident. METI Minister Hiroshi Kajiyama has flatly denied the ministry’s intervention in Toshiba’s general shareholders’ meeting, and noted that it took due action to secure key businesses and technologies from the viewpoint of national security. He has offered no more details.

In the Toshiba case, published documents alone provide an indication of the national security concerns. A documented shareholder proposal related to last year’s Toshiba general shareholders’ meeting urged that a former outside director of Semiconductor Manufacturing International Corporation (SMIC), China’s largest contract semiconductor producer which is the subject of a U.S. export embargo due to national security concerns, be appointed as an outside director of Toshiba.

It is strange to suggest METI should not check concerns about technology leakage. It is natural for METI to seek information from Toshiba about the background of activist shareholders and details of the outsider director appointments.

The revised Foreign Exchange and Foreign Trade Act authorizes the government, in cases of key industries related to national security, to examine whether acceptance of investment from an foreign source and the appointment of outside directors would generate reasons to be concerned about the maintenance of production bases and technologies. These government actions do not amount to any unjust intervention or pressure.

Toshiba has long been plagued with accounting fraud and other compliance-related scandals, apparently inviting activist shareholders to pay attention to its vulnerable corporate governance.

But national security matters should be clearly separated from corporate governance issues. It is natural to give priority to national security over activist shareholders’ rights. METI’spurpose is to protect Toshiba from the partial sale of production bases or the leak of sensitive technology. The ministry has never attempted to protect the Toshiba management team.

While Toshiba should conduct its own investigation and fulfill its accountability responsibilities as a matter of corporate governance, METI should take national security actions steadily and without making a fuss.

(A version of this article was first published by the Japan Institute for National Fundamentals, Speaking Out #804 in Japanese on June 21, 2021.)

Masahiko Hosokawa is a professor at Meisei University and a former director general of the Trade Control Department at Japan’s Ministry of Economy, Trade and Industry. He is also a Planning Committee member at the Japan Institute for National Fundamentals.