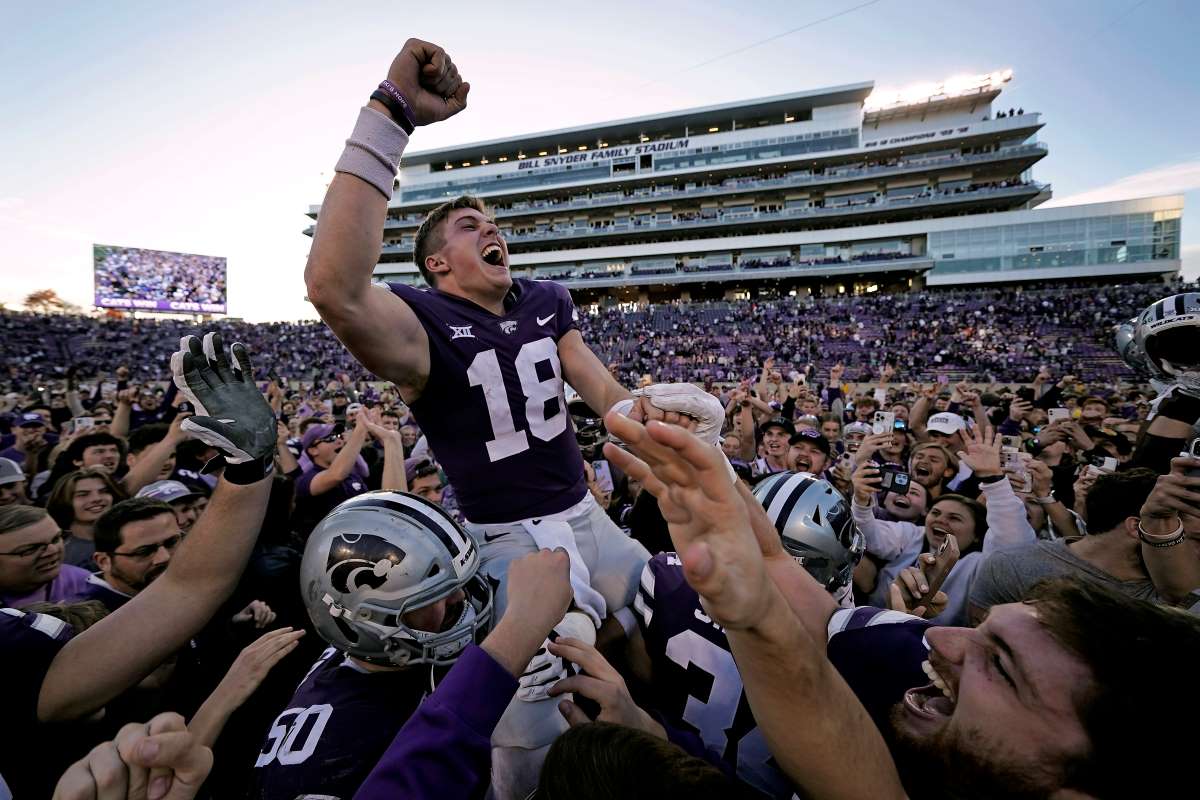 Kansas State quarterback Will Howard (18) celebrates with the crowd as he is carried off the field by teammates after an NCAA college football game against Oklahoma State Saturday, Oct. 29, 2022, in Manhattan, Kan. Kansas State won 48-0. (AP Photo/Charlie Riedel)

Taking panoramic videos and photos, capturing a wide-spread scenic view before your eyes has become much easier to achieve after the progress in smartphone technologies. Using an iPhone, all you have to do is to open the camera app, touch "PANO" which means panoramic, and tap the start icon before moving your iPhone horizontally from left to right.

And now, taking panoramic videos is far easier with inexpensive video cameras. New methods for image shooting and processing can produce a movie covering even a whole football field with high definition.

A system developed by Dr Takeshi Naruo at Kansai University and other researchers is expected to be useful for planning field sports tactics.

The academic literature describing the system, "Development of Technology for Generating Panorama and Visualization Using Two-viewpoint Images," is published in the Journal of Digital Life, a multidisciplinary, peer-reviewed, open access, online journal based in Japan.

Cutting-edge technologies have produced various styles of watching sports events. Prior to the Tokyo Olympics and Paralympics in 2021, Virtual Reality (VR), Augmented Reality (AR), and 5G wireless networks had been utilized and introduced for viewing many events. It has become a reality for viewers to watch breathtaking performances of athletes from multiple viewpoints using a head-mounted display.

These technologies are making sports not only exciting but interesting, too. Yuki Ota, a silver medalist in fencing at the Beijing 2008 Summer Olympics, emphasizes that quick moves of fencers can be recognizable by showing a trajectory of weapons as lightning dots on a screen displaying matches.

Cutting Edge as a Planning Tool

For coaches of sports teams, these technologies can be useful to analyze plays for wins. However, it can be harder to achieve than you may think.

Detecting the movement of players with wearable sensor devices can be done, for example. But it could be difficult to persuade the opposing team to wear the devices.

Thus, video analysis is a major way for planning tactics. The difficult part is that it needs high-end cameras and costs too much for amateur teams or small local professional teams.

Using an inexpensive consumer video camera to shoot an entire soccer court, it must be placed 30 meters away from the court. This results in small images of players and makes it difficult to analyze their movements. Even using a 360-degree camera, some players’ images inevitably become small.

To solve these problems, the research team developed a new system. It uses multiple video cameras to capture different parts of a field and combines the video images into one. This method can make a video covering a widespread scene without losing definition.

The research team conducted an experimental shooting at the soccer court of Kansai University’s Takatsuki campus, Takatsuki City. Two SONY FDR-AX40 video cameras, which are priced at about ￥100,000 JPY each ($690 USD) in retail stores, were set on two scaffolds along a sideline.

Each filmed half of the court during the test match. Camera angles of the both videos were adjusted to capture the center line.

After the shooting, picture frames from both videos were integrated into one panoramic image. The entire field is covered by matching the same feature, such as the center line, of both pictures. The "stitching line" for integration of the shots was determined by the center of the common portion of each picture. This, it was determined, was the better way of eliminating incompatibility and reducing the processing time.

Then the panoramic pictures were connected along the timeline and made into one panoramic video.

In the generated video, there is no tilt or distortion of the players. Also, the motions of player straddling or moving across the center line are captured "generally seamlessly." There is only a small deviation in a few frames, according to the study.

The researchers concluded that the developed technologies are sufficient for practical use.

The study explains that the generated video of the soccer field has a slightly curved sideline. This is due to the position of the two video cameras, which were installed between the centerline and the endline.

However, it is possible to capture the sideline straight by setting two cameras closer to the centerline. Panoramic video generated from another experimental shooting for a football game in Nagai Stadium, Osaka City, has a straight sideline and the entire image of the field is closer to a rectangle.

"The quality of generated images from panoramic videos depends on the filming method, such as filming position and angle of view," the researchers point out in the paper. They also expect that the visual technologies capturing an entire field can be utilized for analyzing performance of players and team tactics.

Automatic detection and tracking of players can be achieved by combining the system with image processing using deep learning, they added.

This article was first published by the Journal of Digital Life. You can read the article in Japanese at this link.