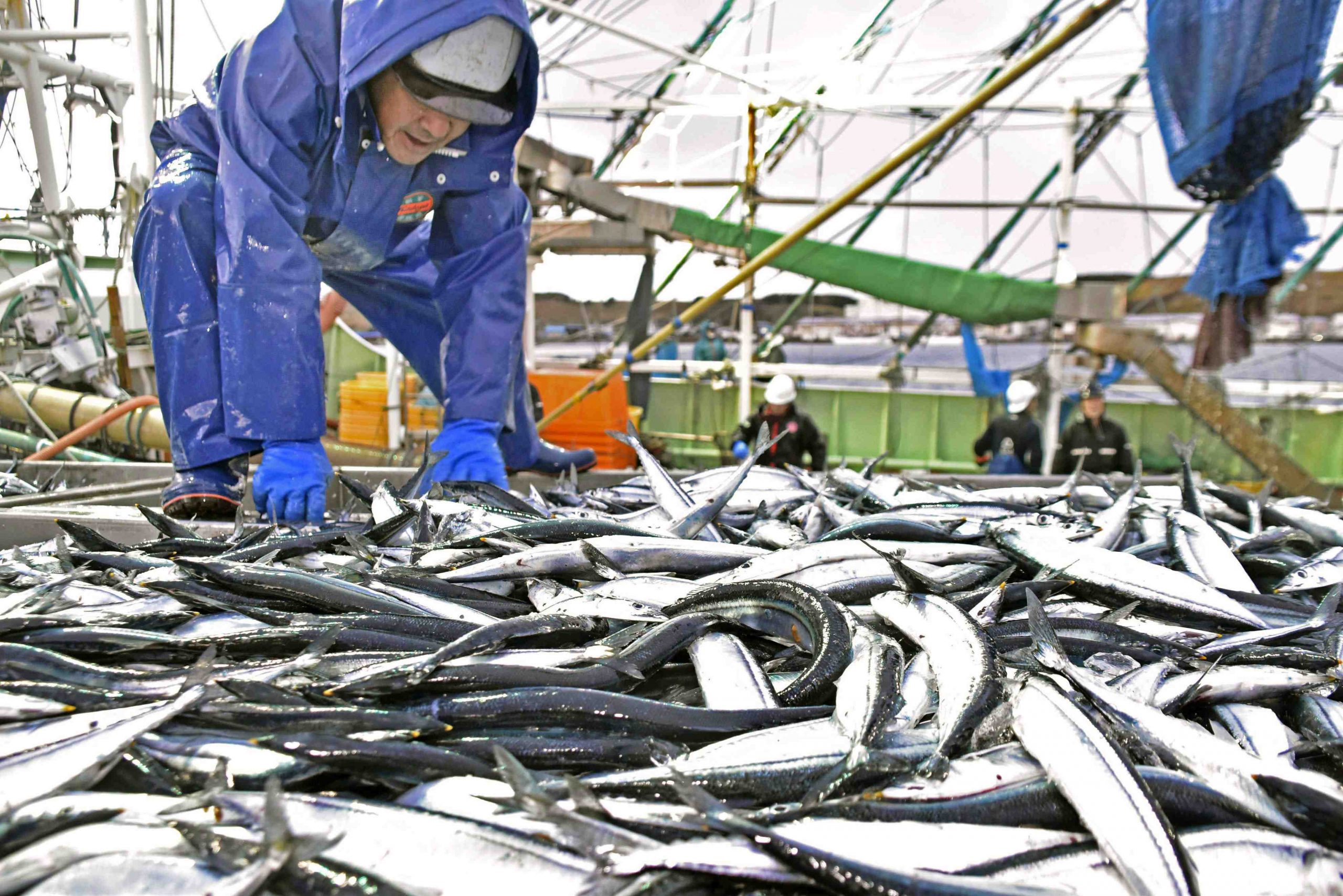 Japan is poised to propose a reduction of the total allowable catch (TAC) of Pacific saury at the upcoming annual meeting of the North Pacific Fisheries Commission (NPFC), scheduled to take place online from February 23 to 25.

The Pacific saury fishery has been plagued by seriously depleted catches in recent years, calling for conservation measures throughout its range. The NPFC, which provides a forum for international discussion of the long-term management of Pacific saury resources, known as sanma in Japanese, is set to take up the issue.

There is concern, however, that some members of the commission such as China and Taiwan, which have been fishing for Pacific saury mainly on the high seas of the North Pacific, may raise objections to Japan’s proposal and prevent the NPFC from reaching a consensus.

The annual meeting was initially scheduled to be held in Sapporo last June 2019, but was postponed owing to the spread of new coronavirus infections. Given that the Pacific saury fishery could begin as early as late April, the timing of the coming NPFC conference comes just before the deadline for concluding resources management negotiations for 2021. The NPFC secretariat has noted that prolonged negotiations could cause the meeting to extend into February 26.

The current fishing limits on Pacific saury are based on an agreement made at the last NPFC meeting in 2019, which addressed management measures for 2020. That agreement set the TAC for the entire distributional range of sanma at 556,250 metric tons, of which the ceiling on high seas catch was limited to a total of 330,000 metric tons. An accord was also reached to allocate the remaining 226,250 tons of allowable catch to fisheries within the exclusive economic zones (EEZs) of Japan and Russia.

Japan is set to put forth a proposal for an overall cut in the TAC this time. Lower catches on the high seas, which are allocated 60 percent of the Pacific saury quota, are called for in order to materialize the conservation goals. As it is difficult to seek reduced catch limits on high seas fisheries alone, Tokyo has also determined that a certain level of reduction of the upper limits on catches in the EEZs of Japan and Russia is inevitable.

However, China and Taiwan are both engaged in pelagic fisheries in the North Pacific for Pacific saury, and they may be adverse to any tightening of regulations of fishing on the high seas.

Interests differ between nations such as Japan, that takes Pacific saury primarily in coastal waters around the country, and China and Taiwan, both of which focus their fisheries on the high seas. Regarding the need for reducing the TAC, China and some others took exception to Japan’s proposal as premature at the 2018 NPFC meeting, resulting in a compromise that delayed introduction of the fishery curbs until a year later, at the 2019 meeting.

In recent years, the actual high seas catch has made up about 80 percent of the total Pacific saury haul. China and Taiwan, and possibly others could call for a change in the way the total quota is apportioned to match the current reality of the Pacific saury fishery.

There are many different views on causes of the poor Pacific saury catch. In addition to the increasing impact from high seas hauls by fishing vessels from China and Taiwan, there are theories pointing to a decline in the Pacific saury stock itself, and shrinkage of the saury’s distribution range due to a rise in the population of true sardines that compete for the same food source.

Japan’s haul of sanma nationwide for 2020, announced in January this year by the National Cooperative Association of Saury Stick-Held Dip Net Fisheries (called Zen-Sanma in the Japanese abbreviation), stood at 29,566 metric tons. This was a decrease of 27 percent from the year before, marking a record low for the second straight year.

Poor Pacific saury catch is not limited to Japan. It is obvious that the overall stock circumstances of the saury have been worsening, with an official of Japan’s Fisheries Agency noting: “All countries and regions concerned may have a common sense of crisis over the situation.”

This will be the first virtual annual meeting of the NPFC. The markedly different format brings with it a host of uncertainties concerning the course of the discussion.

Concerns are growing that the poor sanma harvests will affect consumers at the table. Prices of canned Pacific saury have been rising sharply. For example, in early January Maruha Nichiro Corporation, one of Japan’s major marine products companies, announced that the wholesale price of four kinds of canned saury will be raised ￥30 yen per can before tax, effective from its April 1 shipments.

Kohei Oishi, executive director of Zen-Sanma, said, “I’d like to see the NPFC meeting implement sound conservation management measures so that fishermen, food processors, distributors and consumers all come out of this comfortably.”