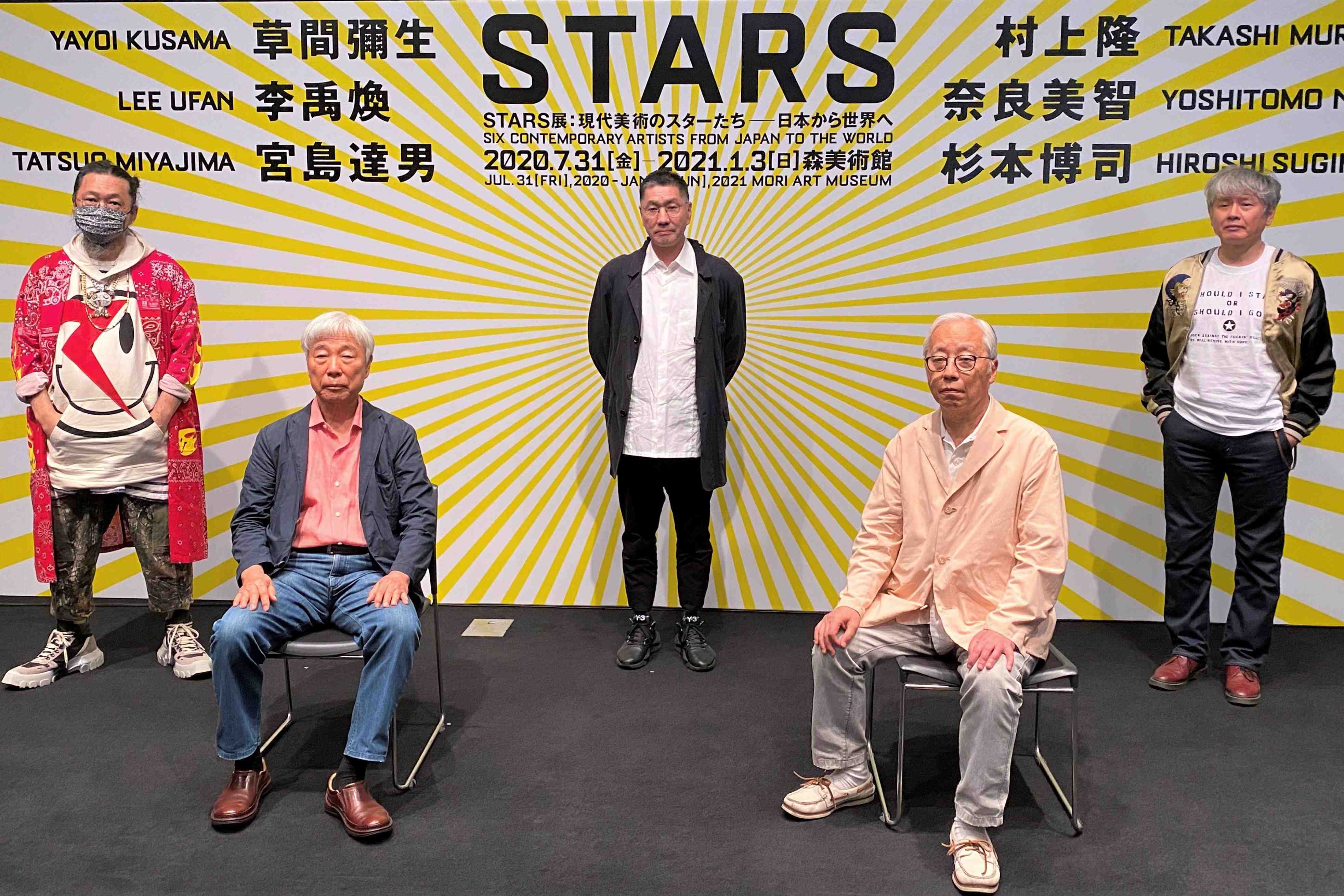 The lineup of six superstars in the world of contemporary art in the Mori Art Museum’s “STARS” exhibition (Roppongi, Tokyo) has attracted much attention. The artists are Yayoi Kusama (91), Lee Ufan (84), Hiroshi Sugimoto (72), Tatsuo Miyajima (63), Yoshitomo Nara (60), and Takashi Murakami (58).

Five of the six artists, excepting the elderly Yayoi Kusama, gathered at the museum in late July for a press conference on the day prior to the exhibit’s opening. The internationally-active artists discussed the turmoil of the pandemic and the nature of art in the age of COVID-19. 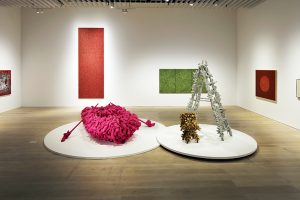 It is as if the stars have aligned to bring about this unparalleled exhibition of six art legends, originally planned for the same year as the Olympics. “We planned to introduce artists that people coming from all over the world most wanted to see,” said Museum Director, Mami Kataoka.

On display are both early works that garnered high praise internationally, as well as more recent works of all six artists. Following the respective trajectories of each artist’s career gives viewers a look at both the history of Japanese contemporary art as well as an idea of where it stands today. For anyone in Japan interested in learning more about contemporary art, this exhibit is a great starting point.

The pandemic resulted in postponement of the Olympics, and the opening of the exhibition was also delayed three months in conjunction with Japan’s state of emergency. At the press conference, the artists shared their experiences during the stay-at-home period and their views on the post-Corona world, with an astuteness so typical of artists. 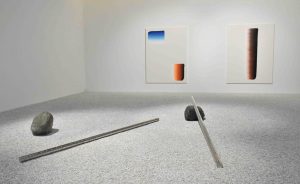 “COVID-19 is a very frightful thing, but it’s also both a warning and a reminder,” remarked Lee Ufan.

Lee’s art typifies the “Mono-ha” movement that has been revisited globally in recent years. As the harmful effects of Japan’s period of high economic growth and mass production began to manifest themselves, Lee pursued works based on the idea of “refraining from producing”. He frequently used natural objects (like stones and trees) to develop sculptures and installations that embodied an awareness of the reciprocal relationships of things.

“At the time in Europe, these works were criticized as being nothing more than Buddhism or Japonism and were not well received, but I continued to focus on ‘creating and not creating’, and slowly got some recognition,” Lee recollects. 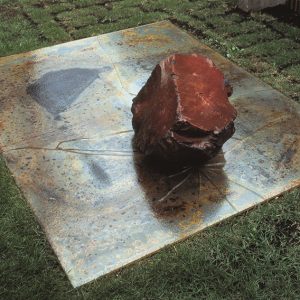 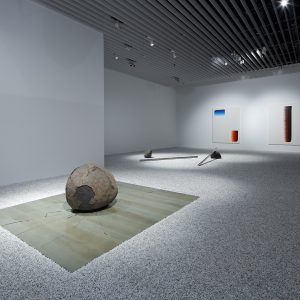 Lee explained that the key to overcoming the COVID-19 disaster lies in the balance between “creating and not creating”. To illustrate his point, he added:

I’m sure you all know that as a result of the global halt in development and production over the last few months, our environment has been improved. This could be our last chance to do something, and as artists, it is our obligation to make art that suggests something to our society. It is my intention to set aside myself, focus my efforts and call attention to the relationship between nature and human beings. 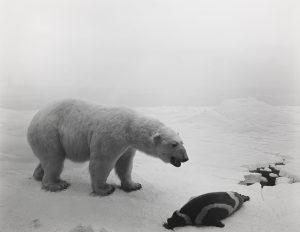 Hiroshi Sugimoto, who has explored time-surpassing human art and the history of primeval times in his early work, “Dioramas”, his masterpiece “Seascapes”, and in his “Enoura Observatory” that opened in 2017, spoke as follows.

We can already sense the coming collapse of capitalist societies that are based on the continued expansion of production. Oceans are polluted, forests are disappearing, and climate change is upon us. Humans are animals, and if we consume and destroy our environment, there will be nothing left for us but to die out. With the extinction of our civilization on the horizon, we have received a warning from mother nature. We should be grateful for this message and respond to it with all the seriousness we can muster. 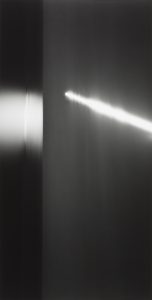 Tatsuo Miyajima and the Age of Selection

“This pandemic has exposed what is truly important,” says Tatsuo Miyajima, known for his installations using LED digital counters. Sudden advances in online communication during the ock-downs and stay-at-home periods have been pivotal. 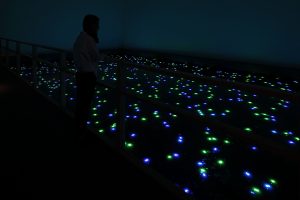 We somehow get by not seeing people we don’t need to see, and not going places we don’t need to go. We can just go online. And it’s pretty much the same for art. In other words, there’s a selection involved.

Since 2017, Miyajima has been working on a memorial for victims of the Great East Japan Earthquake, entitled “Sea of Time—TOHOKU”. The project asks different people from along the coastline who experienced the disaster to set the speed of a digital counter, each in their own way, with the aim of setting up 3,000 LED lights in total.

The latest version is displayed in the current exhibition, with 719 LED lights over a basin of water symbolizing the memories of 719 lost lives. The solemnity of this work is indeed felt all the more standing in front of it in real time. 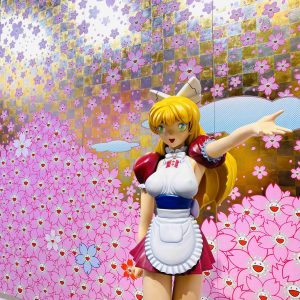 Works by Takashi Murakami on display, including his masterpiece “Miss Ko² (Project Ko²)”, a life-sized figure sculpture, at a glance appear to be cheerful pieces of pop art. His latest work, a large painting entitled, “Cherry Blossoms Fujiyama JAPAN” is another of the highlights.

Yet, Murakami was frank in voicing his view that “exhibitions and installations feel like they have already become things of the past.” 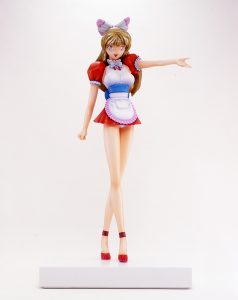 “I’m actively expanding online sales of late. There’s a business aspect to it, but mainly I do it to communicate my art,” Murakami notes. He reportedly endeavors to engage in close interactions with his online audience and buyers by frequently posting information on his works. 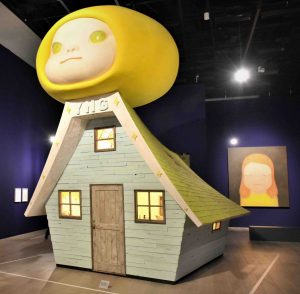 Yoshitomo Nara on Sensing Freedom in the Age of Covid

Yoshitomo Nara, who is to be featured in an upcoming large-scale private exhibition at the Los Angeles County Museum of Art, has reportedly been compelled to spend a total of four weeks in voluntary quarantine following trips to North America to prepare for the exhibit. Yet, Nara reports that his daily life in Northern Tochigi Prefecture has remained the same, both pre-Covid and post-Covid, as well as during his voluntary quarantines.

“Covid creates problems when people relate to each other socially. But when I’m at home, when I’m thinking about things, or occasionally when I’m creating, Covid has no impact. Perhaps it’s imprudent of me to say so, but I actually sensed even more strongly that I was free.”

While at first glance, Nara’s images of children and animals may seem familiar, the combination of innocence and cruelty depicted in the images sparks the imaginations of viewers. The tenderness and unrest evident in the subjects of Nara’s works represent free spirits escaping from power structures.

For people who create things, avoiding disruptions to daily life and having freedom are critical. Freedom abides inside those who were born free. I aim to deliver works like these to people currently living through the age of Covid-19, works that make them free. 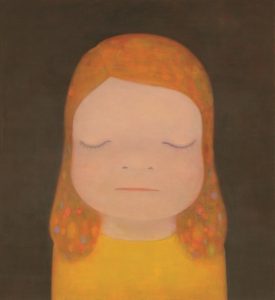 What: STARS: Six Contemporary Artists from Japan to the World”

Hours: Open every day throughout the exhibition.

Ticketsー Tickets are 2,000 yen for adults, 1,300 yen for high-school and university students, 700 yen for children ages 4 through junior high school, and 1,700 for seniors over 65.  NOTE: As of September 19, tickets no longer require advance booking but the number of people allowed to enter at any time is limited. Therefore, advance booking is still recommended, here.

Access: Located in the Roppongi district of central Tokyo, the museum is easily accessible by train, bus and car. Information on access can be found here.