Can the Quad Take On the China Challenge? 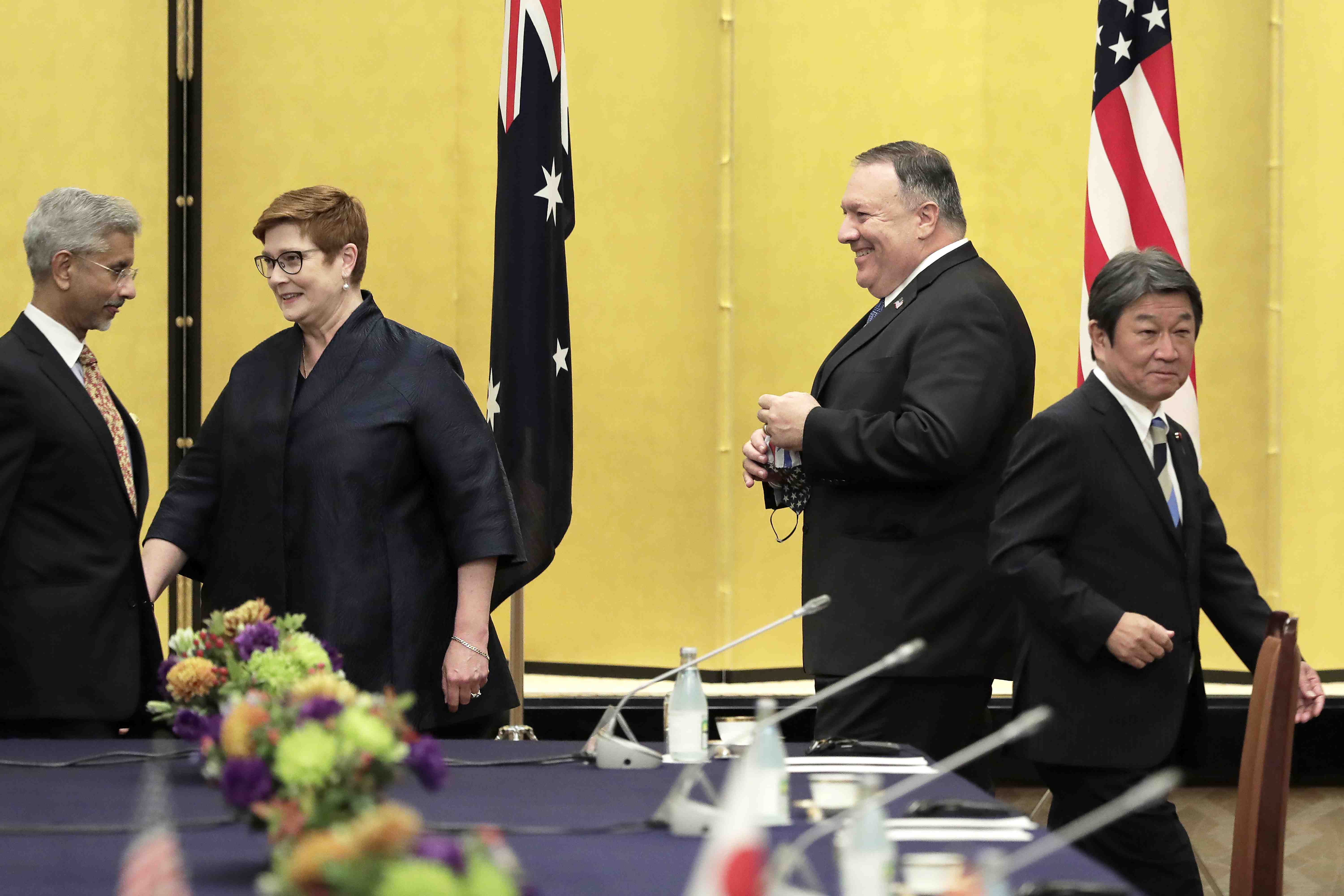 The second ministerial meeting of the foreign ministers of the Quad (or Quadrilateral Security Dialogue) countriesーAustralia, India, Japan and the United Statesーin Tokyo on October 6 assumes great significance in the light of recent developments in the wider Indo-Pacific region.

The Quad has a long history dating back to 2007, though all the four countries involved in its establishment developed cold feet at that time and almost dumped it, in a perfect case of the baby being thrown out with the bathwater.  It was, fortunately, revived much later, on the sidelines of the East Asia Summit in Manila in November 2017.

Since then, there have been a host of developments in the region, while this period has also seen a consolidation of Beijing’s power under the leadership of President Xi Jinping. At the same time, the concept of the Quad has gained renewed traction, especially in the light of their concerns vis-a-vis China’s growing power projection capabilities.

Why Was This Quad Meeting Important?

There is a lot of collaboration that’s already going on between these four countries. India, Japan and the U.S. are set to invite Australia into the Malabar naval exercises later this year.  The Quad foreign ministers have also agreed to meet once in a year.

Second, this was the first time for the new Japanese prime minister to meet face-to-face with a visiting foreign dignitary. His administration has already conveyed its strong commitment to the U.S.-Japan alliance. During the time the Quad foreign ministers were in Tokyo, they also had an opportunity to take stock of their bilateral ties.

Third, this comes at a time when all of these countries have had frosty ties with China. During the pandemic, China has been operating in overdrive in terms of pursuing its military objectives, after having escaped the worst of the contagion. Meanwhile, the U.S. has seen its relations with China deteriorate to an all-time low. At the same time, there have been clashes on the Sino-Indian border, which has resulted in casualties on both sides.

In his opening remarks at the Quad ministerial meeting, Indian Foreign Minister Dr Jaishankar noted: “We remain committed to upholding the rules-based international order, underpinned by the rule of law, transparency, freedom of navigation in the international seas, respect for territorial integrity and sovereignty and peaceful resolution of disputes.”

Japan has also been at the receiving end of intrusions from China around the Senkakus, while Australia’s economic ties with China have been hit hard by China’s latest policies.

The Quad countries will need to take concrete steps to tackle the China threat. These four democratic countries need to join hands as autocratic China has begun threatening democratic countries and democracy itself.  The so-called “success” of the Chinese economic model has been achieved at the cost of human rights, freedom of expression and freedom of religion.

None of the Quad nations will be able to tackle the China threat alone. Decades of economic growth has given the Chinese leadership enough leverage in terms of the economic resources available at its command. In terms of defense allocations, China has the second biggest defense budget in the world after the United States, and it is unlikely that India, Australia and Japan will be able to raise their defense allocations to match those of China.

Under President Xi Jinping, China has dumped its so-called “hide your strength and bide your time” strategy in favor of an aggressive militaristic approach. Recently, two Chinese Coast Guard ships entered Japanese territorial waters near the Senkaku islands. Beijing might be testing the newly-minted Japanese defense minister and the response of the Suga administration.

The fact that none of the foreign ministers of the Quad countries, apart from Mike Pompeo, chose to mention China directly may have an important bearing on the future of the Quad. While Mike Pompeo said “as partners in this Quad, it is more critical now than ever that we collaborate to protect our people and partners from the Chinese Communist Party’s exploitation, corruption, and coercion”, the others were not so forthright. And that could be the biggest challenge for the Quad.

The Chinese Foreign Minister Wang Yi will be paying a visit to Japan later this month and this must be playing on Tokyo’s mind. For India, its relations with China are already at their lowest in decades and this could explain New Delhi’s reluctance to name Beijing.

The upcoming times are going to be crucial for the Quad as the U.S. goes to elections. At the same time, India has been going through a tough phase in its fight against the pandemic.

On the other hand, as seen in China’s behavior towards India, a new kind of assertiveness seems to be creeping into the Chinese foreign policy mind-set, which has already been dubbed as “wolf-warrior diplomacy”.

On the positive side, while various quarters have expressed their doubts about whether the Quad is viable, the recent meeting clearly indicates that it is very much alive.  Going forward, the Quad members will also need to think of inviting other like-minded countries to join the group.

Clearly, the Quad is an idea whose time has come. However, it will be important for the Quad nations to walk the talk when it comes to accepting and tackling the China-challenge head on. Will they be able to bell the cat? We will have to wait and watch.

Dr. Rupakjyoti Borah is an Associate Professor at India’s Sharda University. His forthcoming book is The Strategic Relations between India, the United States and Japan in the Indo-Pacific: When Three is Not a Crowd. He has also authored two other books. He has also been a Visiting Fellow at the University of Cambridge, the Japan Institute of International Affairs (JIIA), Japan and the Australian National University. The views expressed here are personal.  Twitter @rupakj