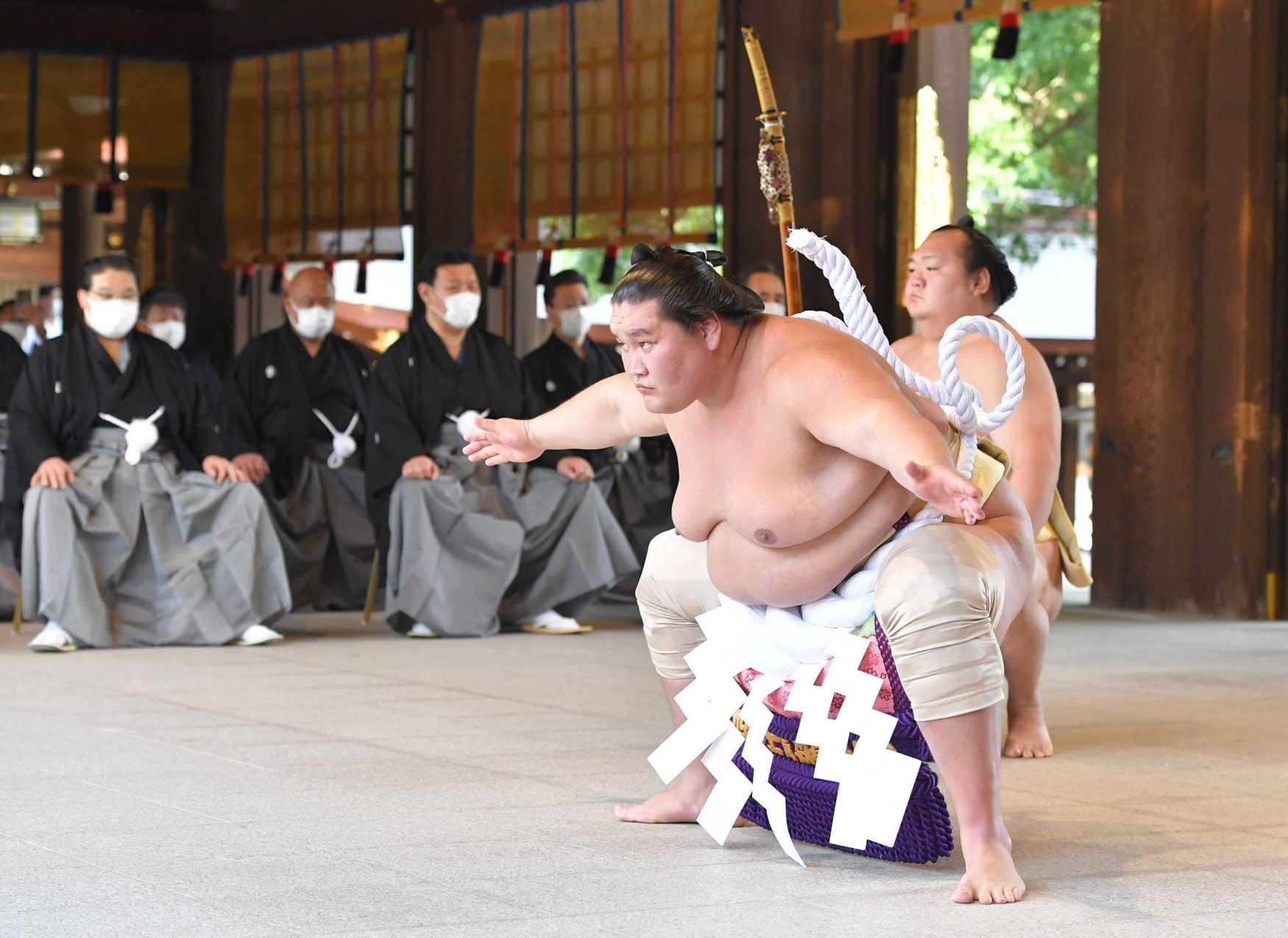 Newly promoted grand champion Terunofuji will be aiming for a title-winning performance when he makes his debut at sumo’s highest rank in the Autumn Grand Sumo Tournament. But history shows it’s not that easy.

The Mongolian-born wrestler will be in the spotlight when the tournament opens on Sunday, September 12, at Tokyo’s Ryogoku Kokugikan.

Terunofuji was officially named sumo’s 73rd yokozuna in July, becoming the first wrestler in four-and-a-half years to be promoted to the sport’s highest rank.

With all the responsibilities and pressure that go with being a yokozuna, Terunofuji, who has a history of knee problems, faces a tough challenge.

“It all depends on how he takes care of his body leading up to the tournament,” NHK sumo announcer Hiroshi Morita said. “It’s very tough to compete at a high level when you are a new yokozuna, grand champion, at least that is what the history says.”

Morita points out that Asashoryu only went 10-5 in his yokozuna debut, while Hakuho, who has won 45 championships, went 11-4 in his first tournament as grand champion.

Terunofuji’s promotion followed an epic comeback from the Mongolian-born wrestler.

He was an ozeki wrestler from July 2015 to November 2017. But a series of injuries and illnesses, that included surgeries on both knees, saw him fall to sumo’s second-lowest division of jonidan in March of 2019.

Since fighting his way back to the elite makuuchi division in July of 2020, Terunojfuji has won three of seven tournaments and twice finished runner-up.

He was aiming for his fifth career championship in July but lost to fellow Mongolian Hakuho on the final day of the Nagoya tournament.

Still, his 14-1 record in Nagoya was more than enough to see him promoted to the top rank.

At 29, time is not on Terunofuji’s side, so there will be pressure on him when he becomes the sixth-oldest “new” yokozuna at the Autumn Basho.

“He’s 29 years old, he’ll turn 30 later this year so he’s no spring chicken,” Morita said. “He knows how to wrestle, he knows how to take care of himself physically and mentally but, the thing is, he has knee problems that are always bothering him. So can he last for 15 days?”

The last wrestler to be promoted to yokozuna did not fare so well at the sport’s highest rank. Kisenosato was promoted to grand champion in 2017 and won only one tournament as a yokozuna. He retired in 2019 after dealing with a series of injuries.

Unfortunately, there will be no rematch between Terunofuji and Hakuho.

The Japan Sumo Association announced on Monday, September 6 that all wrestlers belonging to the Miyagino stable, including yokozuna Hakuho, will not compete in the Autumn Basho after two of the stable’s wrestlers tested positive for the coronavirus.

Hakuho tested negative in a PCR test but after a second wrestler in the stable tested positive it was decided that all 18 members of the Miyagino stable will not take part in the upcoming meet.

The 36-year-old Hakuho completed an epic comeback of his own when he defeated Terunofuji on the final day of the Nagoya meet in July to win his record 45th Emperor’s Cup.

Prior to the July meet, Hakuho had been warned by the Japan Sumo Association over his withdrawal from a series of tournaments. He sat out the May tournament after having knee surgery in March and needed a strong result in July to avoid further calls for his retirement. He delivered in a big way.

It is hoped Hakuho will be back in action for the November tournament.

Terunofuji won’t be the only big-name wrestler feeling the heat.

Because he was hobbled by injury and won only one bout in July, Takakeisho will wrestle in September as a kadoban ozeki for the fourth time, meaning he will need to earn eight wins in order to avoid being demoted to sekiwake.

The other ozeki wrestler, Shodai, went 8-7 in July and will be looking to improve upon that modest result.

Three wrestlers will be registered at sumo’s third-highest rank of sekiwake for the September tournament, but only two of them will see action.

Mitakeumi will line up in the east side of the rankings while debutante sekiwake Meisei is on the west side.

The third sekiwake is former ozeki Asanoyama who is still serving a suspension for violating sumo’s COVID protocols.

Asanoyama was handed a one-year ban in June after a weekly magazine reported that the 27-year-old dined out during the May tournament while sumo wrestlers were under strict orders to stay home.

Asanoyama originally denied the allegations, but pulled out of the May tournament on the 11th day after admitting he had broken the rules.

For those looking for a potential dark horse, Morita likes komusubi Takayasu.

“You might want to keep your eye on Takayasu,” Morita said. “He’s been doing relatively well, very consistent, he sat out a couple of days in the previous tournament because of a sore back, but when he came back he won five or six straight and he was in good shape, even though he sat out the first couple of days.”

Elsewhere, Kotonowaka went an impressive 12-3 as an 11th-ranked maegashira in the Nagoya tournament and was awarded the Fighting Spirit Prize.

Kotonowaka’s grandfather was a yokozuna and his father a sekiwake so he comes from a long line of sumo wrestlers.

Mongolian Tamawashi went 11-4 in Nagoya and will also be among those further down the ranks looking to challenge the favorites.

Kotonowaka has moved up to No. 3 maegashira for the September tournament, while Tamawashi is fourth-ranked.

Top maegashira Hoshoryu is another wrestler to keep an eye on. He is a nephew of retired Mongolian yokozuna Asashoryu, The 22-year-old Hoshoryu has shown steady progress since his debut in the elite division and went 10-5 in July to pick up the Technique Prize.