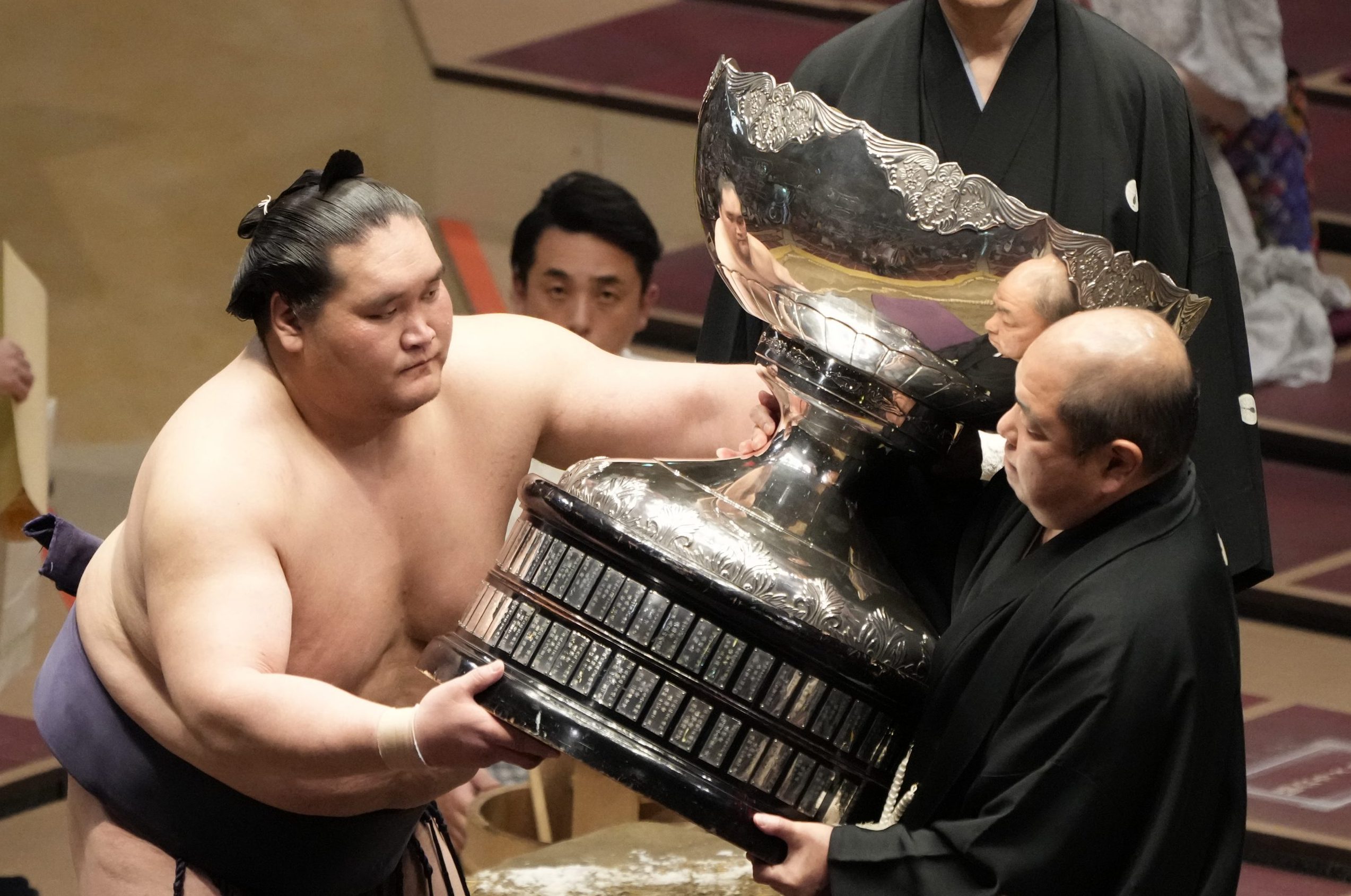 Terunofuji defeated fellow ozeki Takakeisho in a playoff on the final day of the Summer Grand Sumo Tournament on Sunday, May 23 to win his second straight Emperor’s Cup and his first at sumo’s second-highest rank.

The 29-year-old Moingolian won his fourth career title and will now be considered for promotion to sumo’s highest rank of yokozuna if he wins the next tournament, scheduled for July in Nagoya. One of the requirements to be promoted to yokozuna is to win two tournaments at ozeki.

Takakeisho defeated Terunofuji in the last bout of regulation to give both wrestlers a record of 12-3 and force a playoff. Terunofuji forced Takakeisho to the edge in the playoff at Tokyo’s Ryogoku Kokugikan before swatting him down to secure the title.

“I feel happier than previous championships,” Terunofuji said. “Yokozuna is not something you can become just by wishing for it so I will do everything in my power to realize that dream.”

Yokozuna Hakuho, the only wrestler currently competing at the sport’s top rank, pulled out of the tournament just before it started and missed a sixth straight basho, the third-longest injury absence by a grand champion in sumo history.

The 36-year-old Mongolian has had a stellar career with a record 44 titles but many speculate that Hakuho’s retirement is imminent. As such, sumo officials are eager for a wrestler to earn promotion to grand champion.

Terunofuji sealed his return to ozeki by winning the Spring Grand Sumo Tournament in March. He became the first wrestler in history to regain his ozeki status after dropping as low as the fifth-tier jonidan division in March 2019 following a host of health problems, including injuries requiring surgery on both knees.

Terunofuji was handed his first defeat of the summer meet on Wednesday, May 19 when it was ruled that the Mongolian grabbed the top knot of his opponent Myogiryu.

Terunofuji’s win over the No. 4 maegashira was reversed and he dropped to 10-1. It was the first such ruling since January 2016 when then-ozeki Goeido was penalized against Takarafuji for the same violation.

Terunofuji lost to ozeki Shodai on Day 13, and No. 8 maegashira Endo on Saturday, May 22, as the championship race tightened over the final few days.

But he held his nerve after losing to Takakeisho in regulation.

“I just tried to fight as usual and believe in myself,” Terunofuji said. “There were some bad points down the stretch but I’m glad I could win. I just tried to take it one day at a time and stay focused.”


Tournament News for Other Wrestlers

Meanwhile, ozeki Asanoyama withdrew from the tournament before Day 12 after a weekly magazine reported that he broke the Japan Sumo Association’s COVID-19 safety guidelines.

Asanoyama, who had a 7-4 record after 11 days, reportedly went to a dining and entertainment establishment before the start of the tournament when he was under instructions to stay home.

It was a costly move as ozeki who fail to earn eight wins at a grand tournament enter their next meet as a demotion-threatened “kadoban” ozeki and must post a winning record to hold onto their rank.

The 27-year-old Asanoyama initially denied any wrongdoing but eventually admitted to going out following questioning by the JSA. Sumo has been under strict anti-COVID-19 measures. Last May, 28-year-old wrestler Shobushi died after catching the virus, while a total of 28 wrestlers from the lower ranks were sidelined ahead of the Spring Grand Sumo Tournament in March after several coaches were infected.

It was an impressive tournament for rising star Wakatakakage, who lost to No.12 maegashira Tokoeko on the final day to drop to 9-6 but still managed to claim his second consecutive Technique Prize.

The top maegashira posted wins over two ozeki wrestlers, Asanoyama and Shodai, earlier in the tournament.

Wakatakakage comes from a long line of sumo wrestlers. Along with his two older brothers, Wakatakamoto and Wakamotoharu, Wakatakakage started sumo at an early age. Their father was a professional sumo wrestler and their grandfather was Wakabayama, who reached the fourth-highest rank of komusubi.

In addition to beating Terunofuji, Endo also had an impressive tournament and finished with a stellar record of 11-4. Endo, who was in the championship chase until losing to Shodai (9-6) on the final day, claimed the other Technique Prize.

Takanosho defeated fellow sekiwake Takayasu (10-5) on Sunday to improve to 5-10 while komusubi Mitakeumi overpowered Mongolian No. 6 maegashira Ichinojo (9-6) to finish at 10-5.