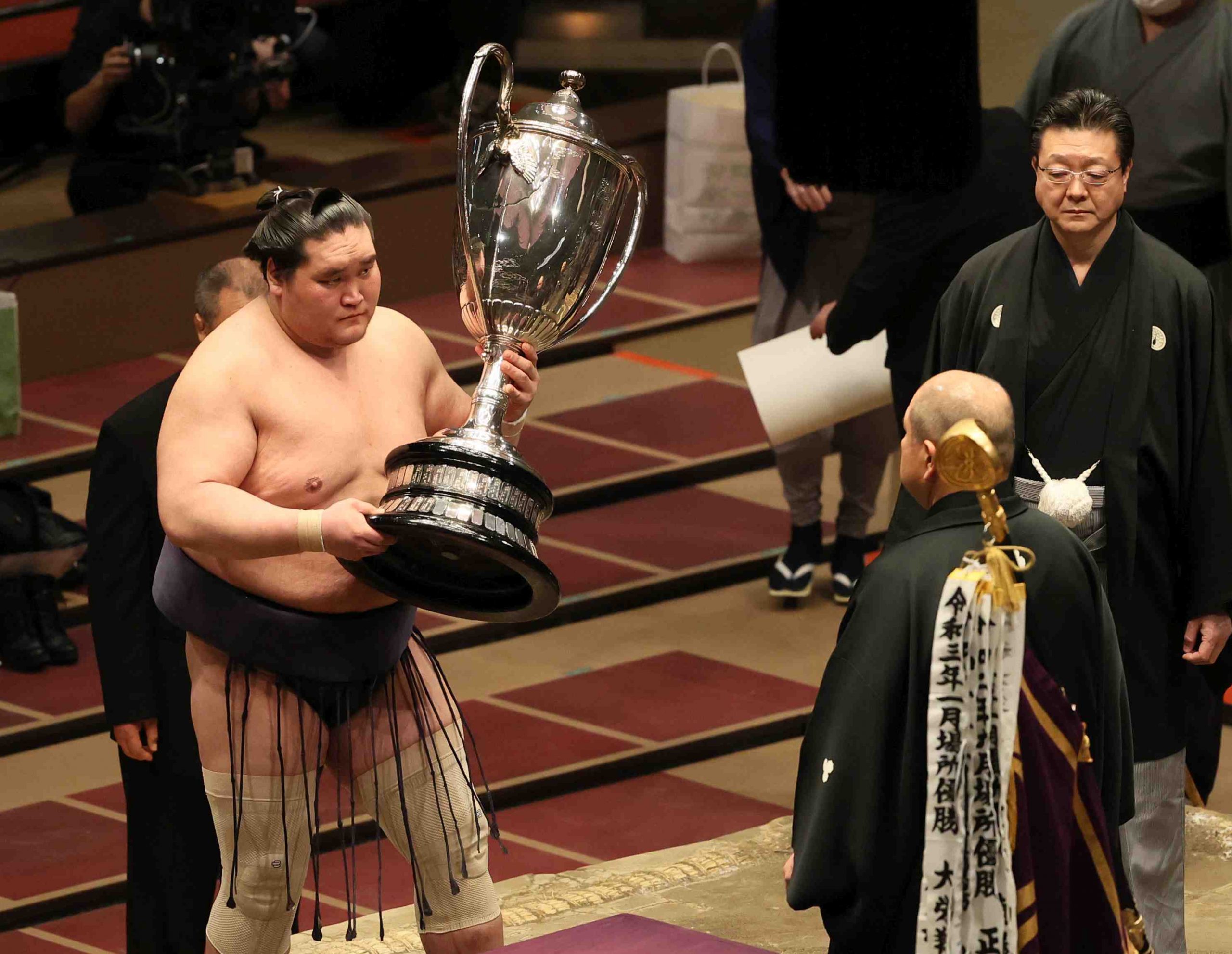 With a forceful, final shove that showcased his strength, sekiwake Terunofuji completed his 15-day quest to win another title. The 29-year-old Mongolian, one of the top title contenders in several recent tournaments, defeated ozeki Takakeisho to seal the deal in the Spring Grand Sumo Tournament on Sunday, March 28.

To secure the victory, Terunofuji recovered from a miscalculation that found him on the brink of a possible defeat and with his feet near the edge of the dohyo. But he avoided getting dropped to the dirt by Takakeisho at Tokyo’s Ryogoku Kokugikan. He regained the upper hand, forcing the action toward the middle of the ring.

Terunofuji then finished his work shift with a powerful shove that sent Takakeisho backpedaling out of the ring to end the match.

At the outset of the match, Terunofuji had sought to yank his foe’s arm, but he failed to grab it, and Takakeisho pounced on the miscue and his muscular momentum carried the sekiwake to the metaphorical edge of the cliff.

With a combined 36 victories over the past three tournaments (three more than the minimum benchmark), Terunofuji is on the verge of promotion back to ozeki.

“I was relieved to win,” Terunofuji admitted after receiving the Emperor’s Cup. “Without support from my fans, I would not have made a comeback here, so please continue to support me.”

With a look of accomplishment in his eyes, Terunofuji, who hasn’t competed as an ozeki since September 2017, reflected on his career resurgence, which has taken him from the jonidan division (second-lowest) to the brink of ozeki again.

“I am so glad I did not quit sumo,” he said on the NHK telecast.

The Isegahama stable wrestler added: “I was just taking it one day at a time [in my comeback], training hard every day. Doing so, I believed this day would come, so I’m really happy.

“I focused on being confident in the ring, and that was my main thing. Sumo doesn’t always go the way you want it to.”

It was Terunofuji’s first title since capturing the Emperor’s Cup at the July Grand Sumo Tournament last year. That title ended a long championship drought for the powerful grappler. He hadn’t won a title since the 2015 Summer Basho, and his career descended in a downward spiral due to injuries and illness.

Takakeisho defeated Terunofuji in a playoff to win the 2020 November Basho.

Entering the penultimate day of the Spring Basho, Terunofuji and Takayasu shared the lead with 10-3 records.

Terunoji then strengthened his title hopes by pushing opponent Asanoyama out of the raised ring to improve to 11-3. On the same day, Takayasu suffered his second straight defeat, losing to Tobizaru.

In an earlier match, Bulgarian Aoiyama conquered komusubi Takayasu (10-5). The No. 12 maegashira raised his record to 11-4.

Wakatakakage, who recorded a pair of wins over ozeki foes in the Spring Basho, collected the Technique Prize.

The Mongolian-born wrestler has missed five consecutive tournaments due to injuries. He pulled out of Spring Basho due to a left hamstring injury. In addition, he has been forced to miss competitions due to elbow and lower back problems.

The 35-year-old Kakuryu, who began his sumo career at the 2001 Kyusho Grand Sumo Tournament, won the Emperor’s Cup six times. He was promoted to yokozuna in 2014.

Now, a “relieved” Kakuryu can look ahead to his future.

“I somehow feel like I have been freed. I decided to retire because I felt I never wanted to step into the ring halfheartedly,” Kakuryu was quoted as saying by Kyodo News. “Am I happy? I’m relieved.”

Fellow yokozuna Hakuho withdrew from the tournament on March 16 due to a knee injury.