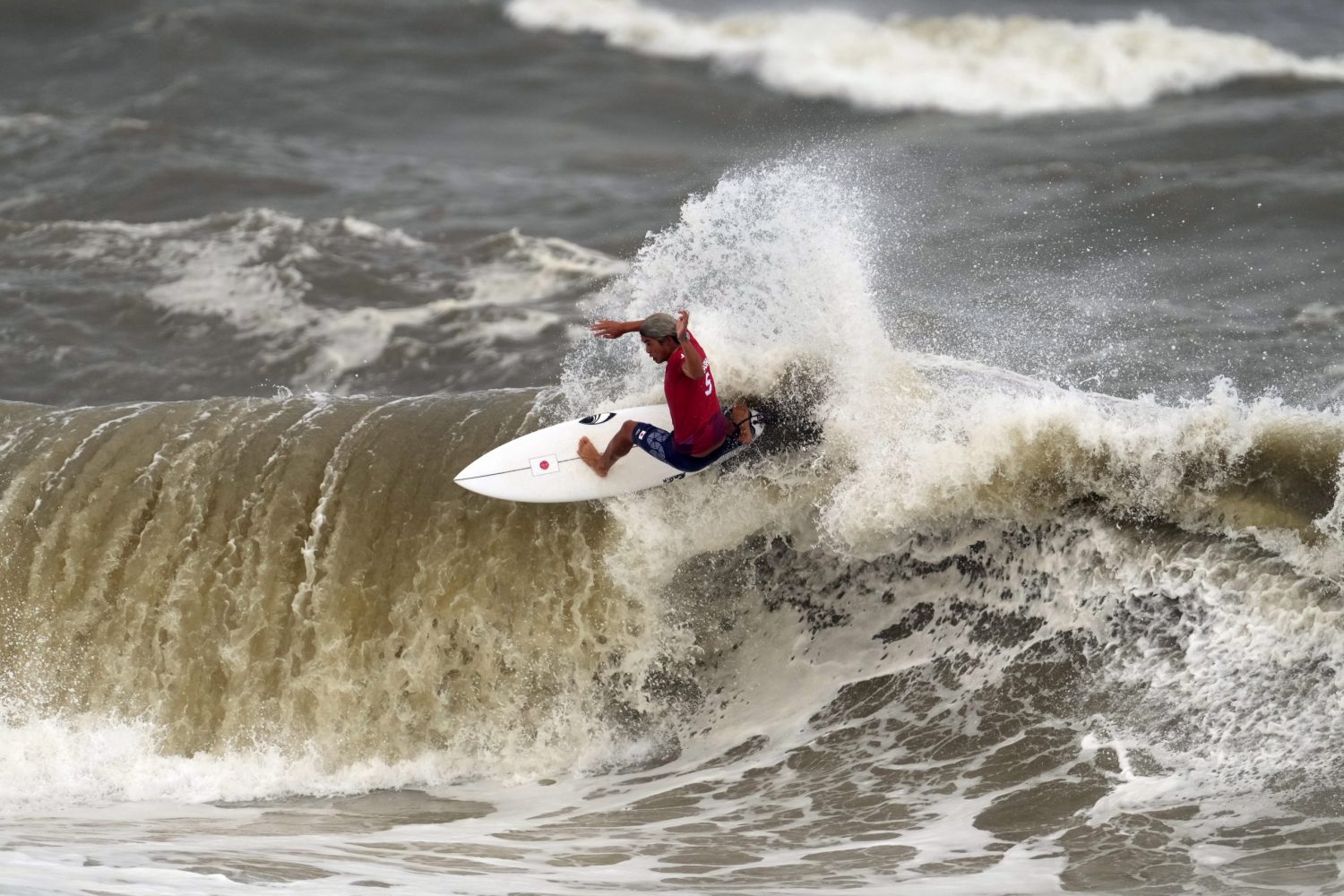 Japan's Kanoa Igarashi competes during the gold medal heat in the men's surfing competition at the Tokyo Olympics on July 27 at Tsurigasaki Beach in Ichinomiya, Chiba Prefecture. (Francisco Seco/AP)

Japan’s Kanoa Igarashi captured the men’s silver medal in surfing at the Tokyo Games on Tuesday, July 27, in a thrilling showdown with Brazil’s Italo Ferreira, who took top honors as the sport made its much-anticipated Olympic debut.

With Tropical Storm Nepartak making landfall in Japan on Tuesday, there were some impressive swells at the Tsurigasaki Surfing Beach in Chiba Prefecture.

And there were plenty of thrills for the host nation as both Igarashi and Amuro Tsuzuki qualified for the semifinals of their respective competitions after fiercely contested quarterfinals.

Igarashi booked his spot in the finals when he pulled off an impressive mid-air spin for an individual wave score of 9.33 out of 10. He finished with a total score of 17.00 to 16.76 for his semifinal opponent Brazilian two-time world champion Gabriel Medina.

“I got power from the people around me and am happy that I’ve won a medal,” he said after the competition, according to The Japan Times. “But I’m still disappointed. I was unable to find my rhythm.”

Surfing is a new addition to the Olympic Games. Igarashi, 23, represents Japan, but was born and raised in Huntington Beach, California.

Also in the men’s event, Japan’s Hiroto Ohhara made it to the quarterfinals, but was eliminated by Ferreira, who achieved a near-perfect 9.73 on his first wave. Ferreira went on to win 16.30-11.90 in their quarterfinal match.

In the women’s event, Tsuzuki beat Australia’s Sally Fitzgibbons in the quarterfinals, but wasn’t able to overpower Carissa Moore, losing to the American 8.33-7.43 in the semifinals.

The 20-year-old Tsuzuki claimed the bronze medal, beating American Caroline Marks by a score of 6.80-4.26. She told Yahoo News after her matches, “It was my first time in the Olympics and I got a little too spirited. I wasn’t able to see what was happening around me.”