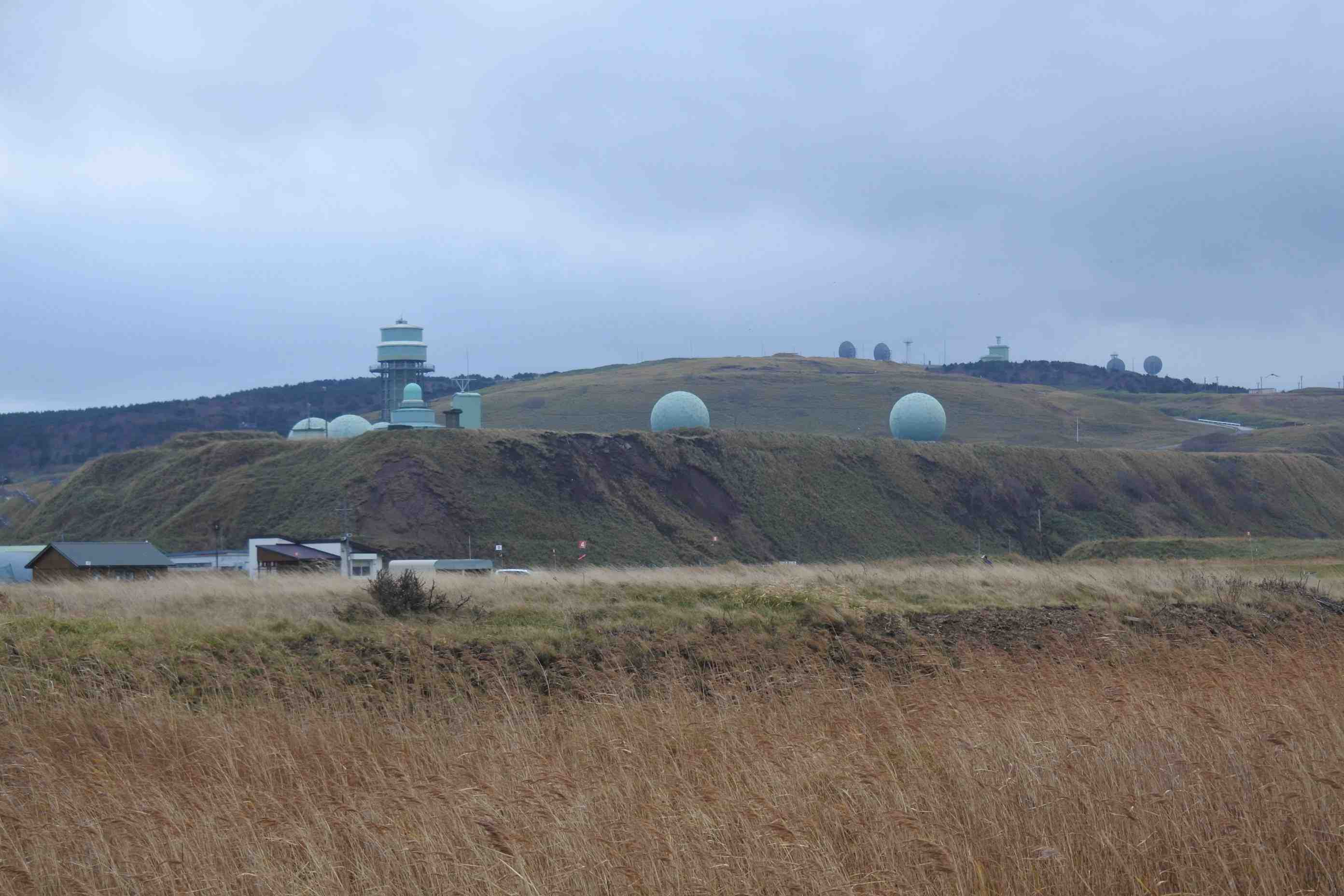 ~Who bought land near significant national security sites - and why? Shouldn’t the Government Know?~

About 80 high-security locations in Japan have apparently been acquired with some kind of link to Chinese capital, according to survey results released by a government-affiliated agency in November.

Acquisitions of this nature – which have previously raised questions at local government meetings across Japan – were reported during a government expert meeting on November 9.

One such acquisition was the Chinese purchase of approximately 8 hectares (about 20 acres) of land about 3 kilometers away from the Japan Air Self-Defense Force’s Chitose Air Base in Hokkaido. This particular purchase triggered questions at a Chitose city assembly meeting in June 2014.

On a similar note, the town of Taketomi in Okinawa looked into purchasing residential land, approximately 2.4 hectares (about 5 acres) in size and close to Taiwan – ahead of the prospective Chinese buyer – at an assembly meeting in September 2016.

The expert panel that met on November 9 plans to submit recommendations to the government this year, based on the reports from local government assemblies.

After that, the government intends to submit a bill that would grant authority to the central government in terms of surveying details of ownership such as the nationality and actual usage of land near to defense facilities and remote islands close to national borders.

The bill is likely to be submitted during the next ordinary Diet session, which is scheduled to convene in January 2021. 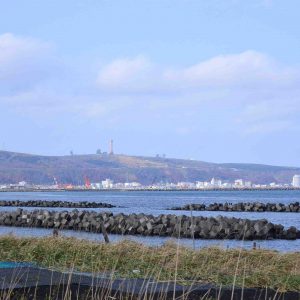 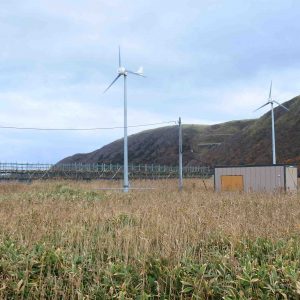 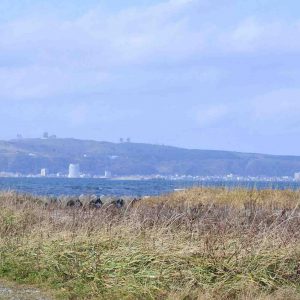 The blades at a wind-generated power plant are rotating powerfully in the breeze coming off the Sea of Japan. The location is Cape Noshappu, in Hokkaido’s Wakkanai city, the northernmost point of the country.

On some higher ground behind the power plant is a radar site at a Self-Defense Force garrison. The radar keeps an eye on the Russian border. Several years ago, there was a scramble among buyers such as wind-power companies to purchase land in the area.

One of the purchasers – thought to be connected to Chinese capital – acquired some land close to the base, which has been described by someone linked to the SDF as the “the throat of the garrison.”

Which raises the question: Who bought the land and why?

After driving on the roads near Cape Noshappu, I arrived at a site where there had previously been eight separate renewable energy business plants.

Now, it is just overgrown with grass, with a love hotel currently not in operation.

Two locations near the radar site, covering a total area of roughly 5,000 square meters, have been purchased by a renewable energy company that is headquartered in Ginza, Tokyo. The locations are only about 1 kilometer away from the garrison radar site, which is used jointly by all three branches of the SDF.

“An absolute choke point.” This is how someone linked to the SDF base describes the geopolitically important Cape Noshappu, facing the garrison.

The narrow corridor of sea, known as the Soya Strait, adjacent to Cape Noshappu is a Northern sea route that connects East Asia with Europe. In recent years, it has been gaining attention from countries such as China.

The city of Wakkanai, which faces the Soya Strait that connects the Sea of Japan with the Sea of Okhotsk, is a particularly crucial information gathering site.

The garrison was concerned it might be wiretapped by an adversary, causing sensitive information to be leaked, and that it would be on the receiving end of radio jamming attacks.

As a result, the garrison has since been investigating local land purchasers thoroughly, and it has reinforced monitoring of the surrounding area. In particular, it has been watching the renewable energy company that bought two sites near the radar base – a firm that accompanied the Chinese CEO of a wind turbine maker to a key business briefing.

What was the Intent Behind All This Activity?

The constant strong winds throughout the year make Cape Noshappu an ideal location for wind-generated power facilities. Approximately 90 business plans involving small-scale wind-generated power were submitted to the Agency for Natural Resources and Energy prior to July 2020.

In particular, the efforts of the renewable energy company that purchased two sites about 1 kilometer away from the SDF garrison in Wakkanai have stood out. The firm set up an office in the city, donated books to the local elementary school, and the manager repeatedly requested meetings with the city mayor.

The company planned to set up small-scale wind and solar power plants in at least nine locations across the city. In June 2017, a business briefing involving government officials took place in Wakkanai – at which the Chinese CEO of a wind-turbine maker spoke about performance and insurance.

In February 2018, the firm purchased land near the garrison, and in September that year, its business plan was approved by the Agency for Natural Resources and Energy. The purchase price is thought to be somewhere between 2 and 3 million yen.

In April 2019, one of the firm’s employees ran for the position of Wakkanai city mayor. “The company may be up here just to make money, but I get the feeling it has some other agenda,” said a senior official at Wakkanai City Hall.

However, in September 2019, the company withdrew from the area, and transferred six planning zones to other business operators. Other companies have done the same, and currently about 70 of the roughly 90 small-scale wind-power projects in Wakkanai are not operating.

In December 2017, a city ordinance was enacted, stating that city residents must be given an explanation about the issue. In April 2018, salt was poured onto the wounds when the price of power-related purchases was reduced.

What was the aim of the company linked to Chinese capital when it purchased land so close to the SDF garrison? I asked former employees who still live in Wakkanai, as well as the current CEO, but the accounting was handled solely by one manager, and the reasons surrounding the land selection are unclear.

I visited a related office in Ginza, Tokyo – where the manager in question has the role of CEO – but was told by an employee that the manager has been in the hospital for a long period of time and unable to meet.

Nevertheless, a veteran Diet member with solid links to Hokkaido revealed that he knew about the situation in detail. “The company phoned me several times, that’s all,” he said.

“Even if Chinese capital was involved, it was a fairly small area of land. Therefore, is this really an issue? I mean, the Japanese bought land in New York during the bubble era,” the Diet member added.

Subsequently, an Aomori-based company bought the land next to the SDF garrison, and the owner of the firm is Japanese. “Currently, I have no intention of reselling the land,” he says.

The new owner also says that board members of the wind-turbine maker “have no capital-related links with China” but he does acknowledge that the CEO of a shareholder company is Chinese.

It is not just the SDF that is concerned about links to China regarding the purchase of land close to the garrison. Apparently, a separate intelligence agency is looking into a connection between the wind-turbine manufacturer and Chinese government officials.

“A foreign power is involved in aspects that are difficult to ascertain. First, we must start by making an investigation possible,” says a government official, referring to the uncertain purpose of the purchase of land that poses a threat to a high-security location.

(Find the stories on which this report is based here and here, in Japanese.)