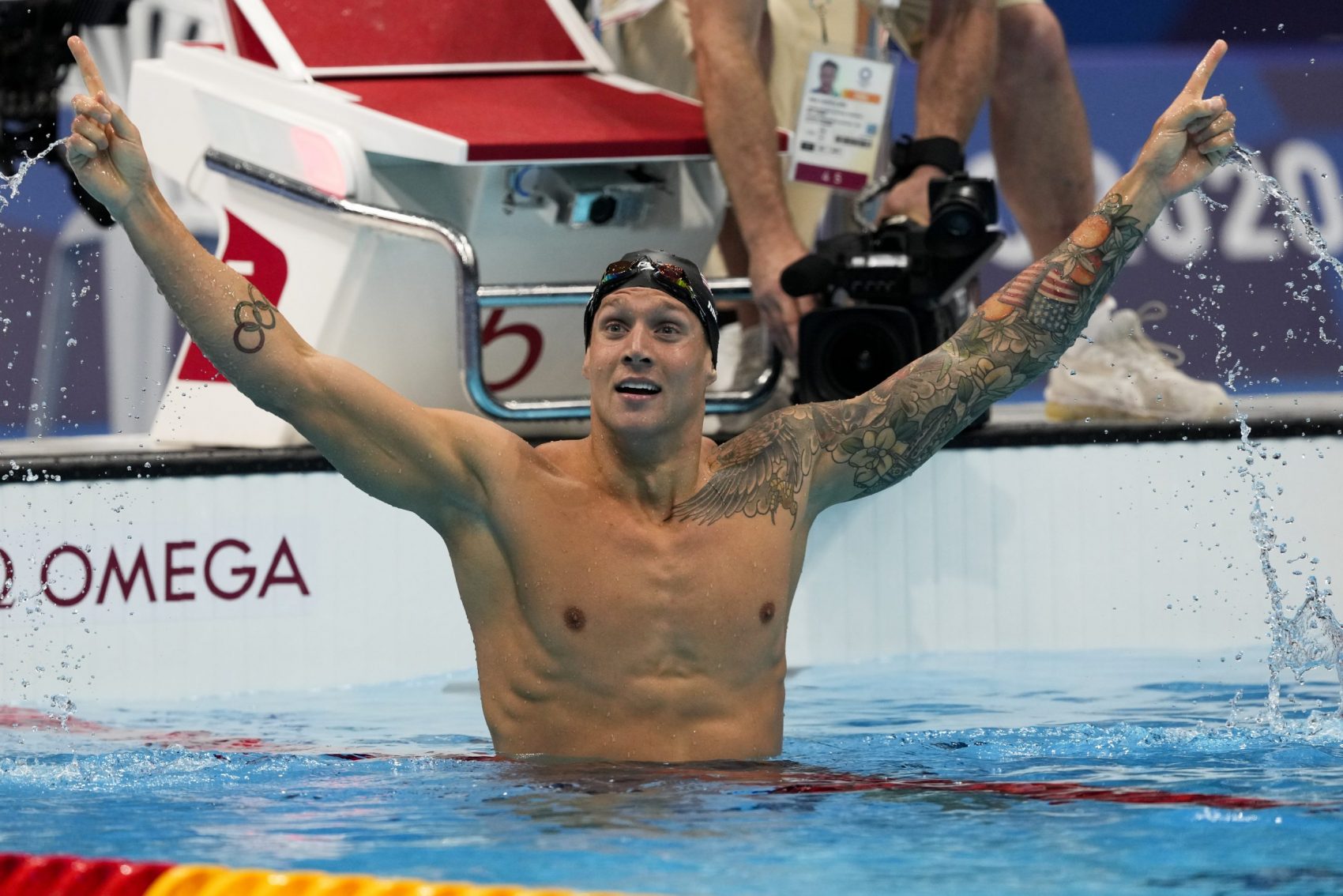 Caeleb Dressel of the United States celebrates after winning the men's 100-meter freestyle final at the Tokyo Olympics on July 29 at Tokyo Aquatics Centre. (Martin Meissner/AP)

Caeleb Dressel was the fastest man in the pool on Thursday morning, July 29.

The men’s 100-meter freestyle final was his global showcase, his opportunity to remind everyone that he’s one of the premier names in the sport in the post-Michael Phelps era.

Dressel set a blistering pace over the first 50 meters, reaching the midway point in 22.39 seconds, then held off his closest challenge, Kyle Chalmers of Australia, to capture his second gold medal of the Tokyo Olympics.

“There’s been a lot of pressure on me. There’s nothing wrong with pressure but there is with stress. I handled it well and I am happy,” the 24-year-old Dressel was quoted as saying by BBC Sport after the race.

Chalmers claimed the silver in 47.08, while Russian Kliment Kolesnikov hauled in the bronze in 47.44.

In the men’s 200 breaststroke final, Australia’s Izaac Stubblety-Cook shattered the Olympic record en route to gold. He finished in 2:06.38. The Netherlands’ Arno Kamminga was second in 2:07.01 and Finland’s Matti Mattsson placed third in 2:07.13.

“My goal was to win a medal, but I think the experience of competing at an Olympic final will help me in my career,” Mura told reporters.

Stubblety-Cook broke Mura’s compatriot Ippei Watanabe’s Olympic mark of 2:07.22, which he set at the Rio Olympics.

A world record was set in the women’s 4×200 freestyle relay final, with China’s Junxuan Yang, Muhan Tang, Zhang and Bingjie Li completing the race in 7:40.33. The previous record, set by an Australian quartet on June 25, 2019, was 7:41.50. Team USA grabbed the silver and Australia claimed the bronze.

Daiya Seto, who made his Olympic debut for Japan in 2016, advanced to the 200 individual final as the third-fastest man, completing his morning qualifying heat in 1:58.86.

Seto was the bronze medalist in the 400 IM in Rio, but didn’t swim fast enough to qualify for the final this time.

“I believed in everything I’ve done,” Seto said, according to Kyodo News. “I was frustrated that I couldn’t deliver results here. Now, I want to make the most of this chance.”

Kosuke Hagino, the 40O IM champ at the Rio Games, also qualified for the final, finishing his qualifying heat in 1:57.47. The Japanese fan favorite opted to skip the 400 IM at the current Olympics.

In the men’s 200 backstroke, Ryosuke Irie swam 1:56.69 in his semifinal heat on Thursday to book a spot in the next day’s eight-man final. Irie was the silver medalist at the 2012 London Games, then slipped to eighth in Brazil four years later.