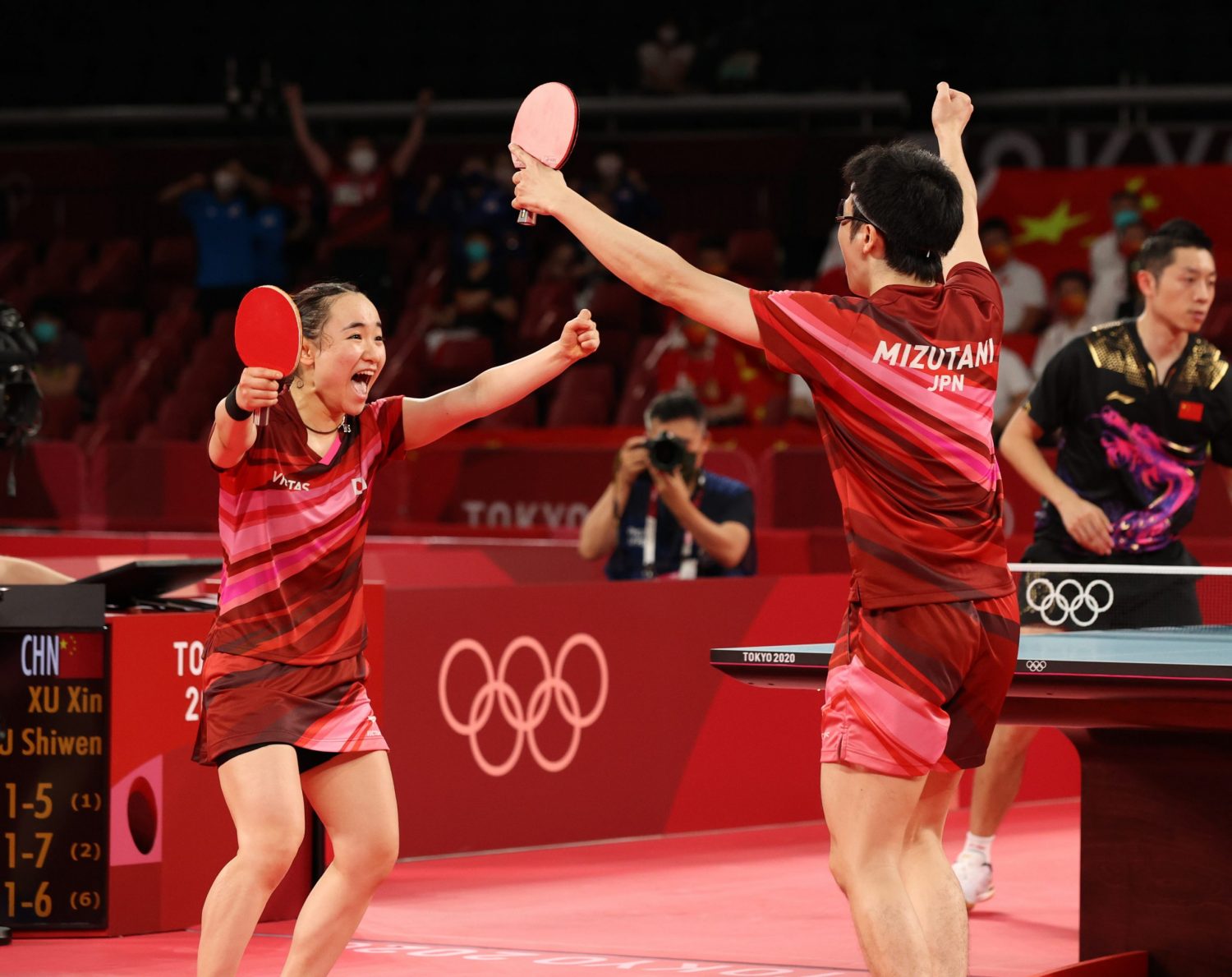 Jun Mizutani and Mima Ito in the moment of their Olympic victory over the Chinese table tennis mixed doubles team, July 26, 2021.

Jun Mizutani, the table tennis player who teamed up with Mima Ito to win Japan’s first-ever Olympic gold medal in table tennis on Monday, July 26, revealed on July 28 that following the championship match he had been subjected to a disturbing personal attack on his Twitter account.

According to Mizutani, immediately after the shock of his and Ito’s win over their Chinese opponents in the final of the mixed doubles event, he received the hurtful message from “a certain country,” reading, “You should die, go to hell, get lost forever.”

However, Mizutani remained unfazed and positive in his outlook.

“I’m too immune for that sort of thing to cause even a millimeter of damage to my heart,” said Mizutani. “In fact, I’m delighted that [our victory] has gotten people around the world so excited.”

The 32-year-old table tennis veteran sent out his own Twitter message with a happy face emoji attached, thanking the Japanese people for their support.

In the hard-fought final the Ito-Mizutani duo beat the Chinese mixed doubles team of Xin Xu and Shiwen Liu by a 4-3 final score. Ito and Mizutani had never managed to best the Chinese pair in their four earlier meetings.

Their breakthrough triumph was historic in more ways than one, since for the past few decades China has more or less owned the sport of table tennis. In fact, China has won 28 of the 32 table tennis gold medals previously awarded since the sport was introduced at the 1988 Seoul Summer Olympics.

Mizutani told a post-match press conference how overjoyed he felt, saying, “Today I experienced the moment of my greatest pride as an athlete when the Japanese flag was raised to the top and the national anthem Kimigayo was played.”

The athlete also stressed what a challenge it had been to top China, saying, “The win also brought home to me just how tough it had been to surpass China.”

Mizutani apparently was alluding to the “illegal rubber issue” in which Chinese table tennis was involved.

In an October 2012 interview with a Japanese sports newspaper, Mizutani brought to light and protested the improper altering of the rubber sections of table tennis rackets through the addition of speed glue or “booster” adhesives in order to enhance the propulsive power of the return.

Mizutani claims that some of the world’s top table tennis players, especially the Chinese players, are even now brazenly using “auxiliary adhesive” to boost the force of return delivered by their rackets.

Still Mizutani remains determined to take on the world’s best players using a standard racket. Now that he finds himself at the pinnacle of the table tennis world, in the days to come he can expect to receive a lot more flack from “a certain country.”