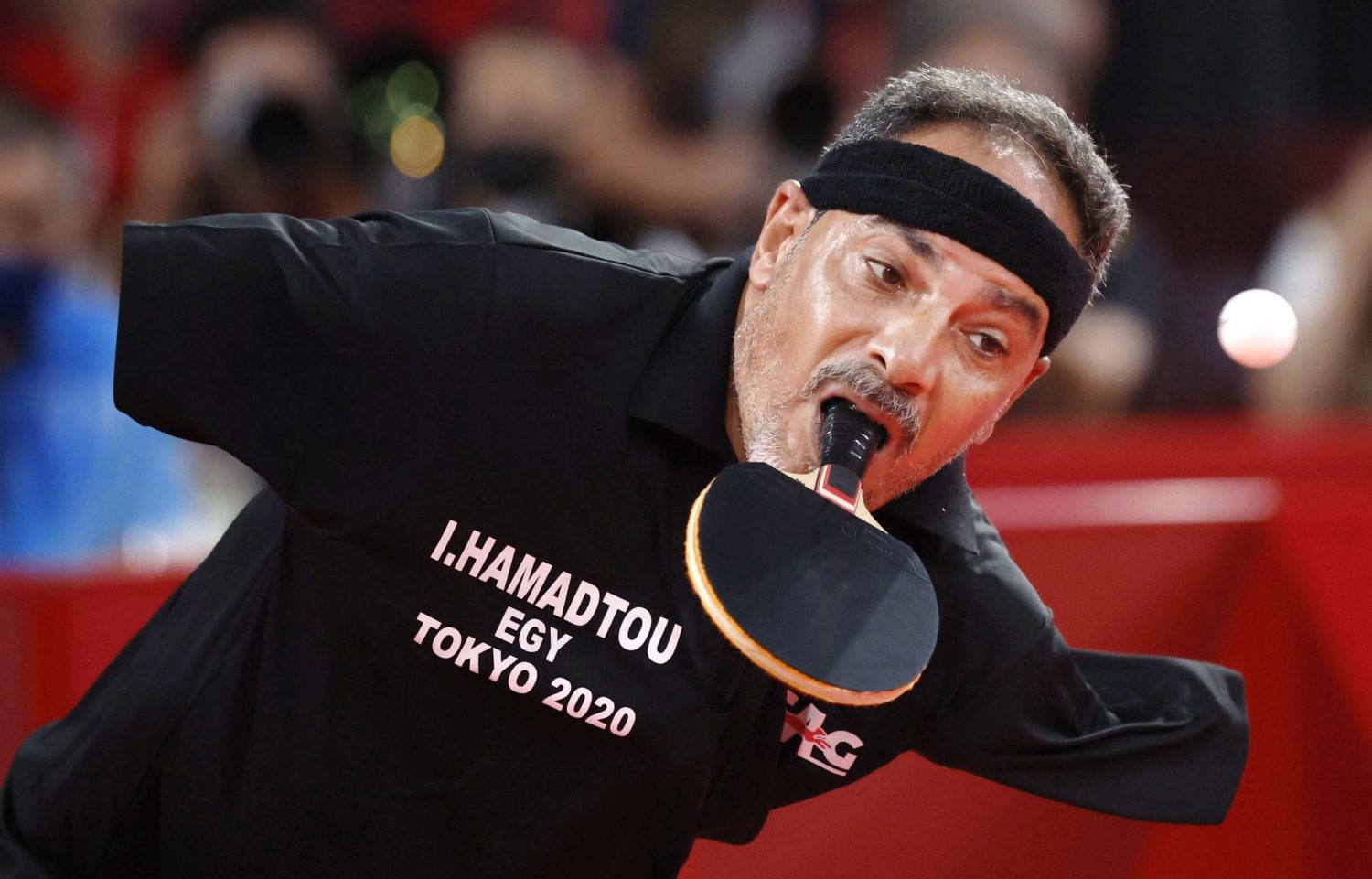 Ibrahim Hamadtou, who lost his arms in a train accident at age 10, made his Paralympic debut in 2016.

Table tennis player Ibrahim Hamadtou has been one of the more inspiring stories of the Tokyo Paralympics.

Hamadtou has no arms and his unusual technique and ability to adapt has drawn attention around the world.

The 48-year-old Egyptian holds his racket in his mouth and does not wear a shoe on his right foot. This enables him to use his toes to hold the ball and gain spin when he serves.

Hamadtou lost his arms in a train accident when he was 10 years old.

He told CNN it took years of dedication to master his technique.

“I had to practice hard for three consecutive years on a daily basis,” Hamadtou said. “At the beginning, people were amazed and surprised seeing me playing.”

Hamadtou lost to South Korea’s Hong Kyu Park in straight sets (11-6, 11-4, 11-9) in a class 6 men’s match on Wednesday, August 25 at Tokyo Metropolitan Gymnasium, but his dogged determination has been one of the most uplifting stories of the Games.

As one of the sports with the highest number of participants in the Paralympics, table tennis is accessible to athletes with a wide range of impairments, both physical and intellectual.

The sport has been part of the Paralympic program since the first Games at Rome in 1960 when wheelchair athletes competed. Events for standing players were first introduced at the 1976 Games in Toronto.

Table tennis has the third-largest number of athletes on the Paralympic program, behind athletics and aquatics. Around 270 athletes from 47 nations and regions competed at Rio 2016.

The basic rules are almost identical to those used in the Olympic Games, with special rules regarding the ball toss part of the serve in some classes.

Under Olympic rules, the ball must be placed in the open palm of the hand and thrown at least 16 centimeters into the air perpendicular to the table.

In Paralympic table tennis, the ball may be tossed by placing it on the elbow or on the racket, but there are exceptions as Hamadtou has shown.

Athletes use a wide range of tactics to suit their impairment, and may use assistive equipment such as a wheelchair, prosthetic leg or cane.

As in Olympic table tennis, China has been the dominant force in the Paralympics. Jingdian Mao won gold in the women’s standing class 8 event at London 2012 as a teenager and went on to defend that title in Rio.

Some athletes also compete in the able-bodied competition. Poland’s Natalia Partyka has an impairment in her right forearm and competes in the women’s class 10. In addition to contesting every Paralympic Games since Sydney 2000, winning four singles titles plus a team gold in Rio, the 32-year-old also attended each Olympic Games from Beijing 2008 to Rio 2016 and reached the last 32 at London 2012.

“I was trailing by quite a lot, so my approach was I’ll take whatever points that come my way. I was just thinking of taking one point at a time,” Yang told paralympic.org.“We had a good game plan and I played well. I’m really very happy because I’ve never beaten her before.”

“I was leading, I made easy mistakes,” Partyka said. “I became nervous, but she played well. I lost today but I have won four times so that shows I am a good player. Sometimes players lose even if they are leading.”

“When I came here, I just thought that I would give my 100 percent without thinking of anything,” Patel said. “If you give 100 percent, the medal will come. If I continue with this confidence, with the blessings of the people of my country, I think I will win gold tomorrow.”

Maki Ito lost in the semifinal of the class 11 women’s event and had to settle for bronze.

The 36-year-old intellectually impaired athlete lost in straight games (11-8, 11-6, 12-10) to Lea Ferney of France but went two places better than her fifth-place effort at the 2016 Paralympics.

Ito took up table tennis in junior high school. She took part in the Paralympics in Rio de Janeiro in 2016 but didn’t win a medal.