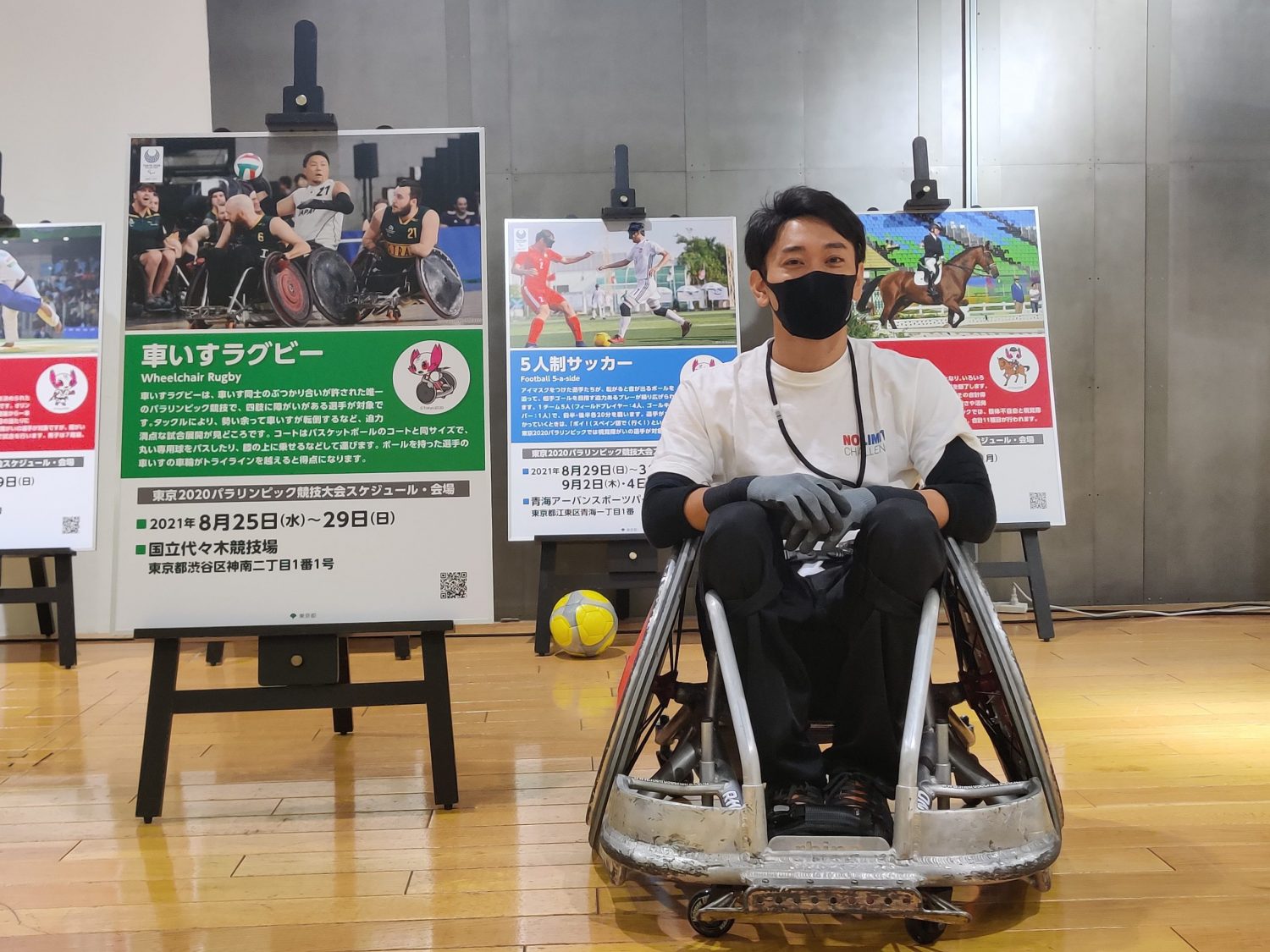 These features describe wheelchair rugby, a sport characterized by fast pace and one of the first para sports to admit tackles, gaining it the eloquent name of “murderball.”

On Friday, August 27, the Tokyo Media Center in Yurakucho held an event to raise awareness about the world of Paralympic sports and athletes.

Called aptly the “No Limits Challenge,” it sought to give media representatives a better understanding of the world of wheelchair rugby, and of the athletes’ hopes for a more inclusive society.

Present at the event was Masahito Aratake, a 30-year-old wheelchair rugby athlete and aspiring Paralympian. He is part of the BLITZ team in Tokyo, which finished second in the Japanese championships in 2017 and third in 2018.

Aratake started training in the sport in 2017, following a spinal cord injury in the workplace. He has since aimed to participate in Paralympics in wheelchair rugby.

As he explained the nuances of the sport, it was easy to see what would make it interesting to participate in.

With offensive sets that need to happen in less than 40 seconds – the time limit is an element of the play – it’s a strategic and fast-paced game. And like able-bodied rugby, there is an exciting element of athletes fearlessly crashing into each other.

“This was the first sport to admit tackling in a para sport,” explained Aratake, as he demonstrated a tackle and a quick slalom.

Seeing it in first person, it was shocking to experience how loud tackles are, and the skill needed to achieve speed in movement.

A Wheelchair for the Occasion

Given the characteristics of the game, what exactly are the features of the wheelchair used by these para athletes?

Seeing one up close, it’s clear that the wheelchairs cater to the needs of the sport. Unlike what many of us imagine as the standard for wheelchairs, this piece of equipment is slightly lower to give it stability, has six wheels (four small and two large) to give it mobility.

The large side wheels are also mounted on a round plastic plate-like structure, to protect the wheel from damage, and inclined in a slight A-shape to add extra stability for the user.

Moreover, there are two types of wheelchairs used in the sport: one for offense, and one for defense. The defense style wheelchair has a long elongated net structure where the feet sit.

The close contact with other players also means that there are occasionally punctured tires and minor mechanical repairs which, under the rules, need to happen in less than a minute during the game.

Getting a Feel for the Athletes’ Experience

The event gave reporters the opportunity to put themselves a bit more actively in the athletes’ shoes with a hands-on experience workshop.

To get a better feel for the concepts they were talking about, I took the challenge and tried out the rugby wheelchair. What did I find?

The wheelchair is incredibly ergonomic and light, and it’s so intuitive that you are turning on yourself and whizzing along in no time.

Tackles are exciting but they don’t hurt per se, although athletes need to train themselves to fall properly so as not to get hurt in case they are toppled over.

It was a humbling and yet exciting exercise in empathy to see the court from the wheelchair perspective.

The Importance of Team Sports

Aratake, a Shizuoka native, noted how the transition to the new sport came with another added difficulty since he was previously a gymnast, which is an individual sport.

“At the start, the transition did cause some confusion. In gymnastics, you just focus on improving your skill. In rugby, training on your own is important, but it’s more important to work together with your team,” explained Aratake.

“I think that the biggest thing I have learned over the time I have been training is to really become one with my team, and work together towards victory.”

Aiming for an Inclusive Society

Quite apart from the personal challenges that athletes like Aratake face, it was hard not to get pulled in by the appeal of a sport which is truly diverse and inclusive.

In fact, this is true even in the structure of the game. Each player is given a classification score, between 0.5 and 3.5 (in order of more serious to less serious disability). Up to four players can be on the court at the time, and their combined disability scores need to add up to 8 points.

Commenting on this, Aratake hopes that added attention on the sport during the Paralympics will raise awareness:

“Through this sport, people can know that there are many kinds of people. […] And this is true with disabilities, as there are different degrees. By recognizing that, we can aspire to an inclusive society.”

With a warm smile that lit up his face even through the mask, Aratake concluded: “That said, I would also just like people to know that wheelchair rugby is fun!”

It was great timing that, just as the talk finished, at the Yoyogi National Stadium the Japan team went on to narrowly win 57-53 against Australia, the two-time defending Paralympic champion in rugby.

Interested in finding out more about the sport? The finals are set to take place on Sunday, August 29, with the bronze medal and gold medal matches scheduled for 2 p.m. and 6 p.m. JST, respectively.

RELATED:WHEELCHAIR RUGBY | Japan Improves to 2-0 with Win over Denmark