Taimen Railway’s Engine No. 31 ‘Conveys the Tragedy and Futility of War’ at Yasukuni Shrine 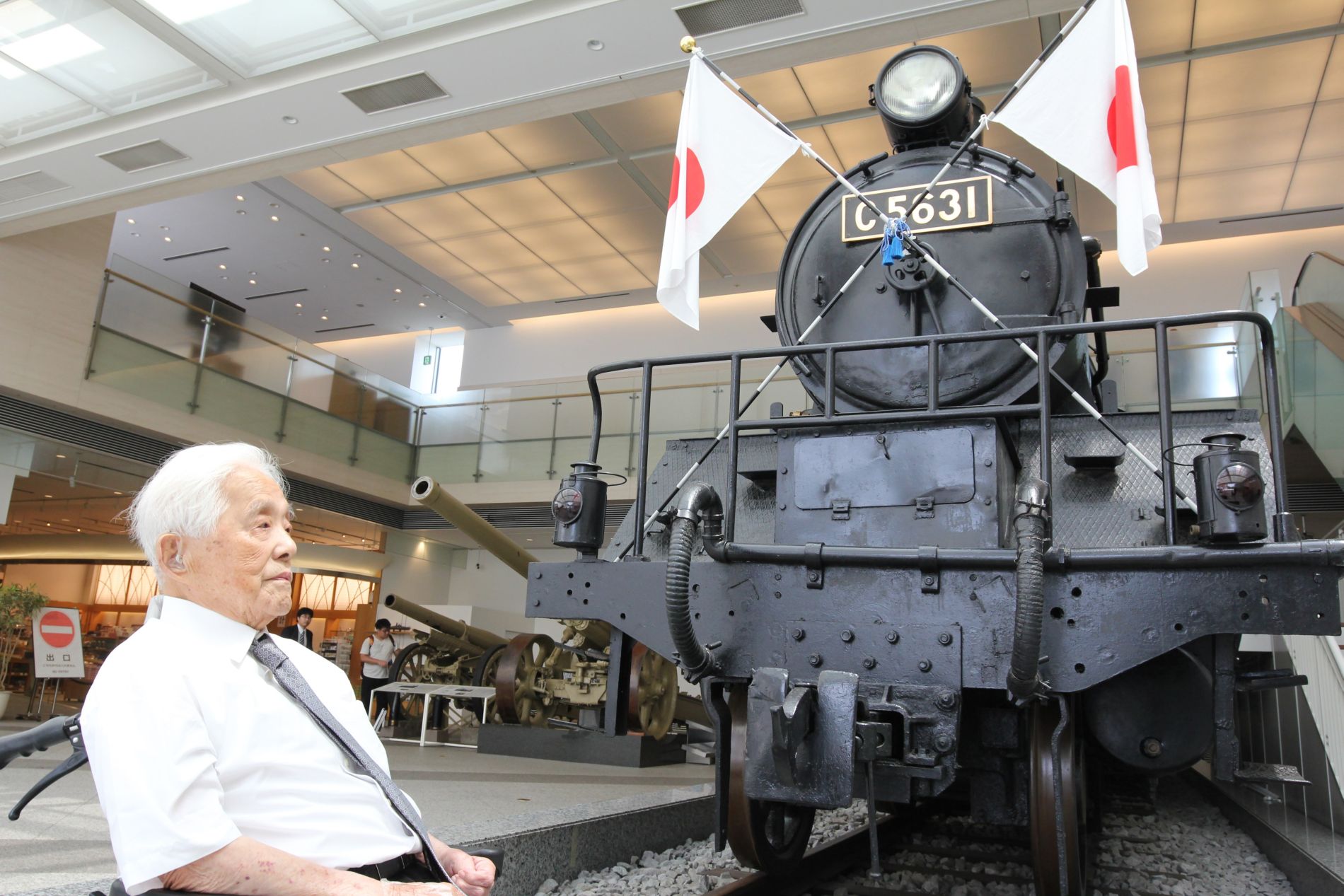 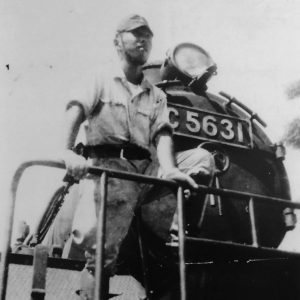 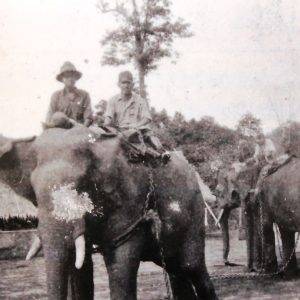 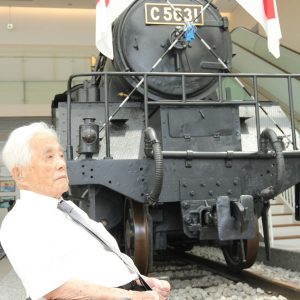 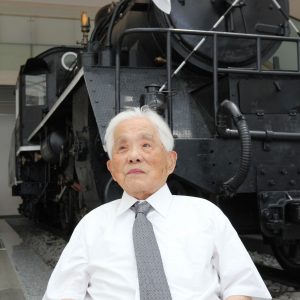 A ceremony held July 31 at the Yushukan Museum within the precincts of the Yasukuni Shrine in Tokyo served to recall the arduous building of the Taimen (Burma) Railroad between Thailand and Burma (now Myanmar) during World War II.

The Japanese military needed this rail link to supply its forces in Burma. The challenging engineering project, involving laying track through dense jungle and bridging numerous rivers, was carried out at a breakneck pace and completed in just one year and three months.

The July 31 ceremony was held to commemorate the 40th anniversary of the dedication of Engine No. 31, a famed C56 model steam locomotive which had played a prominent role in the Taimen Railroad saga, as an offering to the shrine. The engine had been returned to Japan 34 years after the war.

Among those in attendance at the Yushukan ceremony was Renichi Sugano, 100, a former commander of a railway unit within the Japan Imperial Army which was involved in the construction of the rail link. A living witness to history, Sugano agreed to be interviewed and shared his thoughts on the legacy of Engine No. 31.

Built in One Year and Three Months

In 1942 Japanese military forces in Burma had only a vulnerable supply line by sea. Therefore, it was decided to do what the British had previously considered but concluded was impossible — build a railway from Thailand to Burma over numerous mountains and rivers and through seemingly impenetrable jungle.

Work on the railway began in July of that year. With the builders lacking heavy equipment, the logs used for building the bridges were carried by elephants.

The lead rolling stock were a fleet of 90 C56 model steam locomotives. However, among them Locomotive No. 31 stood out as something special.

Sugano, who at that time commanded the 9th Regiment of the railway force, and his men were at the forefront of the advance. “Every time new track was laid, Engine No. 31 would move forward to test it,” he recalls. “Engine No. 31 was always there at the spearhead, and we looked upon it as the symbol for our efforts.”

The building of the railway proceeded at a breakneck pace. Rocks were chiseled apart by hand to lay the roadbed and human wave tactics were employed to gouge out a path through the jungle. With the roadbed being laid at the rate of about one kilometer per day, the entire route was covered in just one year and three months. The resulting 415-kilometer (258-mile) link between Ban Pong in Thailand and Thanbyuzayat in Burma rivaled in length the distance between Tokyo and Ogaki (in Gifu Prefecture) on the Tokaido Line.

In addition to roughly 15,000 Japanese Imperial Army troops — mainly from the railway units — at least 55,000 Allied POWs and an estimated 200,000 civilian laborers from Southeast Asian countries worked on its construction. More than 100,000 are believed to have died, including as many as 12,000 Allied POWs, mainly from malaria and other illnesses.

Part of the rail line they built is still in use as part of Thailand’s rail system.

The 1957 classic movie The Bridge on the River Kwai, which director David Lean said was not meant to be taken as actual history, was set on the River Kwai in Thailand. Winner of seven Academy Awards, the film’s portrayal of Allied prisoners being forced to labor on the Taimen railroad under horrendous conditions became seared in the public mind.

Postwar investigation by Japanese researchers questioned the widely accepted image of the project abroad, especially in the United Kingdom. There it was called the “Death Railway” because of allegedly inhumane treatment and overwork of the POWs by the Japanese military. Japanese research found that there was “absolutely no intentional abuse of POWs.”

“The movie was not factual,” says Sugano. “The POWs were certainly not treated as guests. But there was no intention to abuse them.”

Also, in the movie, the POWs were shown giving technical support to their captors. Sugano denies that.

“The fact is that the railway regiment decided everything. The POWs were brought to us every day with orders to lay a certain predetermined amount of track. But in the evening, they were returned to their quarters.”

After Japan’s surrender Sugano himself was sent to a POW camp in Rangoon (today’s Yangon) for incarceration. Some of his comrades were tried and executed as war criminals.

Gone But Not Forgotten

After repatriation in 1948, Sugano launched a war buddies association (Senyukai) for surviving members of the 9th Railway Regiment. He also made repeated trips to Thailand to try to discover what had happened to Engine No. 31.

Then in June 1978, far away from the route of the Burma-Thailand railway, in a town near the Malaysia border, a Japanese railroad researcher by chance stumbled upon the whereabouts of the legendary steam locomotive. Engine No. 31 was sitting in the grass, waiting to be scrapped.

After being informed of the find, Sugano and his associates scrambled to raise funds to have the locomotive shipped back to Japan. The following year, in 1979, it was loaded onto a cargo ship along with Engine No. 44, which had been discovered in Thailand.

Returned to Japan after 37 years, Engine No. 31 was donated to Yasukuni Shrine, while its sister, Engine No. 44, was sent to the Oikawa Rail Line in Shizuoka Prefecture, where it has been refurbished and is now carrying passengers.

“We look at the return of Engine No. 31 to Japan as representing our comrades who died over there,” says Sugano. “That’s why we entrusted it to Yasukuni Shrine.”

Every year members of the Senyukai would gather around Engine No. 31 to hold a memorial service for their deceased war comrades. But with time having substantially thinned their ranks, that custom was abandoned in 2003.

Nevertheless, Sugano strongly avows his intention to continue to honor all those who lost their lives in the construction of the Taimen Railway, be they Japanese military comrades, POWs, or locally recruited laborers.

“I want to see the memory of this locomotive preserved always. Its very existence conveys the tragedy and futility of war,” he says. “I want it to remain with us, forever.”

Photos taken by Sugano of the Thai-Burma Railway and other subjects dating back to before World War II will be on display from August 3 until November 3, 2019, at the Yushukan Museum inside the grounds of Yasukuni Shrine.

The Taimen Railway linked Thailand and Burma (now Myanmar) as a supply route for the Japanese military during World War II. Opening just one year and three months after construction started, it was approximately 415 kilometers long and ran from Ban Pong in Thailand to Thanbyuzayat in Burma. In addition to the approximately 15,000 Japanese troops, including a former railroad regiment, approximately 55,000 Allied prisoners of war and around 200,000 Southeast Asian workers recruited locally were engaged in its construction. Today, part of the original railway continues to function as part of the Thailand Railways.

(Click here to read the interview article in its original Japanese.)