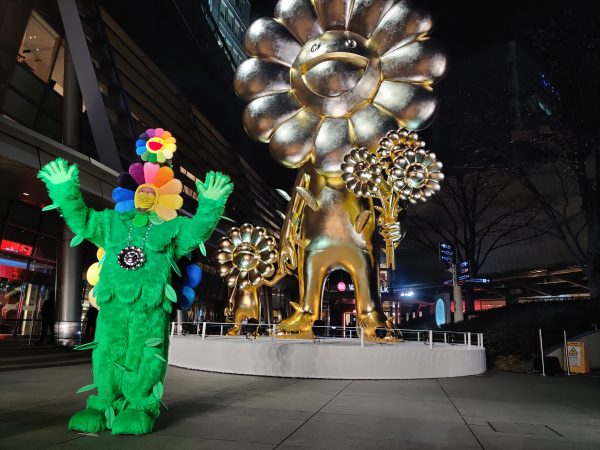 ~I wanted to communicate the way that Japanese smile. It doesn’t mean that they always smile and laugh.~

In Roppongi Hills Plaza 66 on November 26 a new monument glittered in the golden hour just before sunset.

Indeed, it's a golden statue for a golden hour. Ten meters tall and nearly seven meters wide, an enormous statue called Haha Bangla Manus 2020 stands proud in the middle of the hip mixed-use shopping-working-entertainment district of Roppongi Hills in Tokyo.

A recent creation of the internationally renowned artist Takashi Murakami, the bronze statue covered in gold leaf shows a depiction of the contemporary artist’s popular flower motif. It shows two humanoid flowers – one adult and one smaller - holding hands and smiling broadly.

But don’t be fooled. If you go around the back, the flowers show respectively an enigmatic smile and no expression at all, a simple depiction of the age-old truth that nothing is as simple as it seems.

The impressive size makes it the largest sculpture of the prolific artist. The monument was positioned at the heart of the Tokyo district of Roppongi as a way to bring vitality and hope during this particularly trying time. The 360 degree perspective of the work and its story also reaches out to a children's audience, and perhaps the child in all of us.

The statue was unveiled at a ceremony on November 26, with the artist Murakami present to provide some of the context. He told the press at the unveiling ceremony: “The statue was made in the countryside in Washington State. There were many hurdles, and it’s almost unbelievable that we have made it to this point.”

With humor, sharing anecdotes and wearing an exceptionally colorful flower-themed onesie, Murakami stole a smile from all those present.

Yet the artist also showed nuance in his artistic expression. “With the different ways of seeing the piece, I wanted to communicate the way that Japanese smile. It doesn’t mean that they always smile and laugh.”

To mark the unveiling of Murakami's statue, from November 27 Roppongi Hills is opening the "Ohana Cafe" in the Hills Cafe Space (where hana means flower in Japanese). The cafe will be open until January 3, 2021, with the flower theme dominating all food and drinks served. 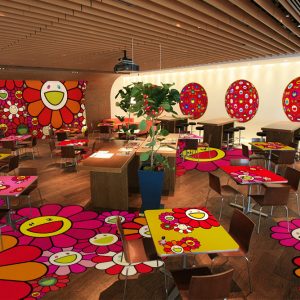 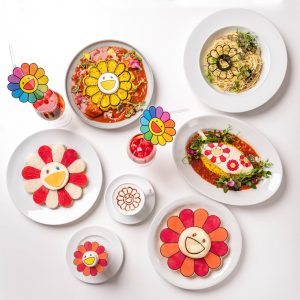 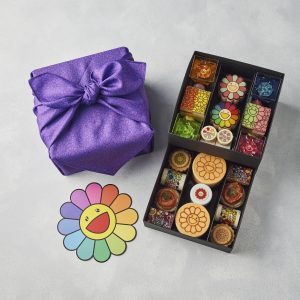 How Murakami’s Art was Influenced by COVID-19 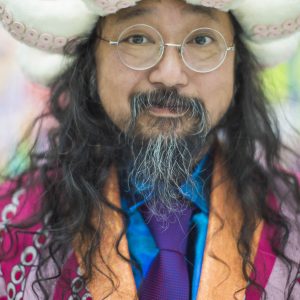 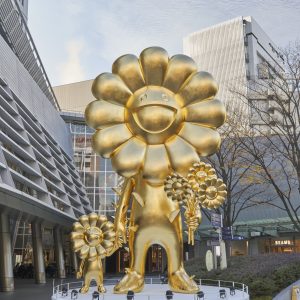 It hasn’t all been rosy for Murakami since the onset of the pandemic. The artist -like many around the planet- has had to face one of the hardest moments for this generation, both emotionally and financially.

Normally a very productive artist making more than 200 works a year, he has produced much less than half ー about 40 ー in 2020. Murakami also shared the intimate moment of how he found some respite from the bleak situation and COVID-19 related news by watching YouTube videos that made him laugh.

Murakami pulled up a reference to Japan’s pop culture as he explained to the press how he felt about this pivotal moment in history:

“When I watched the new anime film, Kimetsu no Yaiba (2020), I cried throughout. The reason why I cried was because the story is about a devil who makes humans watch a nice dream, to distract them. In a moment when I felt that my company was going to go bankrupt, I really empathized with the story.”

It turns out that Mr. Murakami has also had to adjust his business model to face the new world situation.

He had been an artist whose business was, to a large extent, based on sales from gallery shows and exhibitions. These portions of the business were largely halted due to the onset of COVID-19.

Since the start of the pandemic, the contemporary artist has instead shifted to smaller art pieces that can also be sold online. Now this accounts for 80 percent of his business.

Among his larger pieces, the new Haha Bangla Manus 2020 is also a new kind of art that he proposes to pursue. “You might think that this is the kind of thing you need to physically come and see. But I would like for people to take pictures, share it on SNS, and enjoy it right on your phone… Although this work with the large smiling faces was designed three years ago, I think the timing actually worked out well.”

Going forward, Murakami is set for a shift in his art. The artist elaborated on November 26, explaining that just as the 2011 Great Eastern Earthquake influenced his art, so, too COVID-19 was bound to change the themes he would cover going forward:

I’m 58 years old, but it’s clear this year is an important turning point. This time, I think [the theme] will be the relation of facing death, and thinking about life and death.

The artist explained how the shift was also provoked by the discussion on death that the virus has brought about.

In fact many artists are committing suicide, so there is talk that death is bad… But [I think] there are times when thinking about death might be the easiest and most natural thing.

Murakami therefore explained how he would like to change the conversation:

For those people, part of my job is also showing what kind of a world we live in. I think it’s important to face deathーnot with a moralistic stance that 'death is bad, full stop'ーbut more of, how can we support people who are thinking about death in a way that they can feel fulfilled with the story of their life?

The artist concluded: "In that sense, I think a lot has changed this year."

With the Tokyo 2020 Olympics and Paralympics set to happen in Japan and the spotlight pointed back on the country, fans of Takashi Murakami might be in for some new art in the future.

More About the Artist

Murakami is one of six artist superstars recognized for his impact on the world of contemporary art in the Mori Art Museum’s “STARS” exhibition (Roppongi, Tokyo), going until January 3, 2021. Other artists featured in the exhibition are Yayoi Kusama (91), Lee Ufan (84), Hiroshi Sugimoto (72), Tatsuo Miyajima (63), Yoshitomo Nara (60), and Takashi Murakami (58).

The artist was born in 1962 in Tokyo. Seamlessly meshing tradition and contemporary, he has founded the postmodern art movement heavily influenced by anime and manga, baptized “Superflat.”

Using strong colors and bold graphics that tiptoe around the kitsch, his work has gained an important following abroad. One of his anime figurine works was auctioned off in 2008 for ￥16 billion JPY (approximately $15 million USD). Murakami has since collaborated with world renowned brands such as Louis Vitton, and since the beginning of this century his works have been displayed in the U.S., Russia, Hong Kong, the United Arab Emirates, and more.