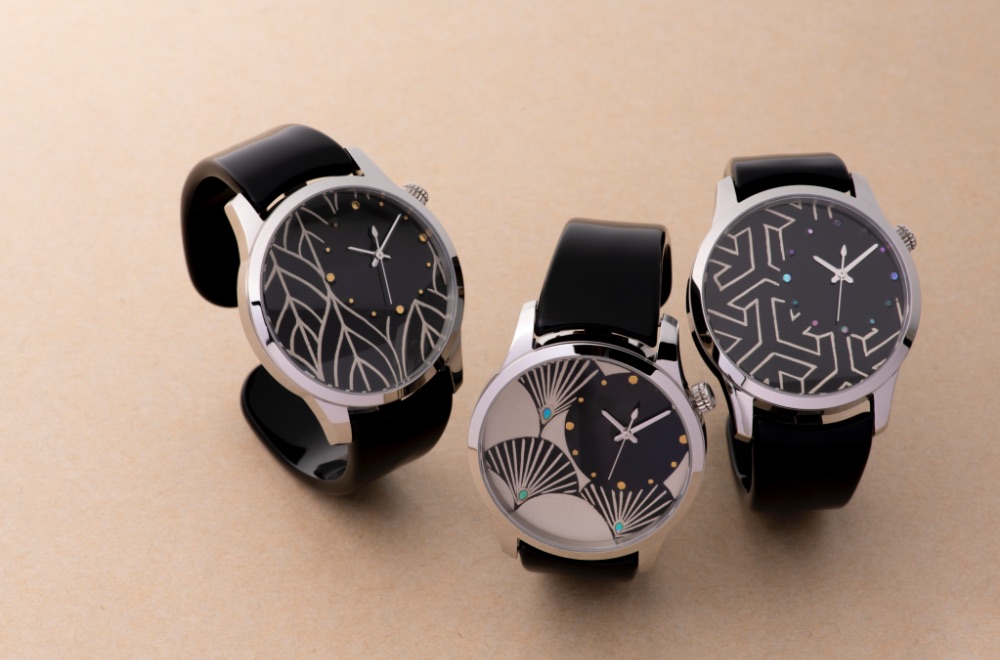 “I love wristwatches, but because I have disabled fingers, I can’t put them on myself”. Such words led to the creation of a wristwatch that can be worn using just one hand.

Is there a way to put on a watch as one would hook eyeglasses around their ears? This idea led to the development of a new product that incorporates the manufacturing technology of eyeglass frames, which Sabae prides itself on.

Founded in 1982, SANYOU started off as a traditional Echizen lacquerware company. Kazuo Igarashi, 52, the second president of the company, has been creating wristwatches with lacquer dials, with hope of increasing the opportunity for people to appreciate the traditional lacquering techniques.

It was about five years ago, when Mr. Igarashi showed watches at an exhibition to promote the product. He was approached at the time by a visitor who said the following: “I love wristwatches, but because my fingers are disabled, I’m unable to put on leather band watches by myself. I wish there was an easier way to wear them.”

These words stuck in Mr. Igarashi’s mind. Having always wanted to integrate local technology into making wristwatches, he wondered, “Glasses are placed on the face. Can eyewear technology be used to place them on wrists?”

With this idea, he was inspired to apply the company’s skills in manufacturing eyeglass frames, the pride of his local city, Sabae City, Fukui Prefecture, to creating the watches.

With help from a local eyeglass frame makerーPlus Jack Inc.ーMr. Igarashi embarked on the development. 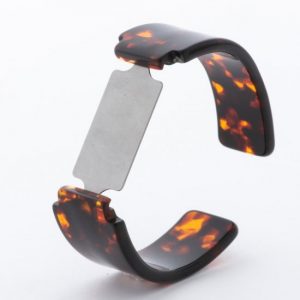 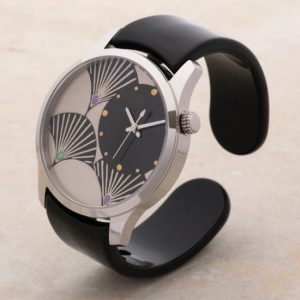 Trial and Error Eventually Led to the Perfect Design

The shape of the watch was quickly decided. It was in the form of a “bangle”, a type of bracelet without a fastener. Made from metal or resin, a bangle can be worn with the gap on the bracelet widening when pressed against the wrist. The idea was to attach a watch onto the bangle.

However, productization is not a simple matter. Although the material was chosen, because they could not form the bangle into a shape that could be easily removed, prototypes had to be made over and over again. Despite their efforts, Mr. Igarashi said, even a year after starting, the design wasn’t working. At one point, he even thought about giving up on the project, but roused himself to continue and vowed to “go all out”.

In 2017, the product was finally completed when the team arrived at the optimal 0.6mm thickness for the titanium plate, which plays the role of a spring on the watches and determines the comfort of the wearer. At that thickness, it doesn’t feel too tight on the wrist but it won’t come off, either, even if you swing your arm.

Although a customer’s single comment triggered the birth of the product, Mr. Igarashi explained, “Solving a problem is the origin of manufacturing. I was given a big break.” In March of 2018, the watch launched for sale under the brand name, IGATTA COLLETTI. The watches are priced from 38,000 yen including tax, and an increasing number of variations in designs and sizes, such as smaller models for women have been added. Sales channels have expanded at the same time through online shops and souvenir stores in Tokyo and Fukui Prefecture.

For Those Yearning for Home

Then, the coronavirus pandemic struck. Although the company was also affected, when summer came around SANYOU was able to recover sales as Mr. Igarashi realized a new need surrounding the watch.

“There were many people who wanted to purchase craft products from Fukui for themselves, or as gifts, because they could not go home this year. It seems nostalgia for their hometown grew stronger due to the pandemic.”

Mr. Igarashi happily says, “I’m glad to see people choose the watch because they are made using the technology of Fukui lacquerware and eyeglasses, both of which are local industries.”

He continues, “The making of these watches involve a wide variety of steps, such as lacquering and metal and resin processing. Just selling one watch alone means jobs will be commissioned in Sabae. This also feels rewarding.”