Tears of a Mouse: Story Tells of Sesshu’s Journey to Becoming the Greatest Japanese Painter 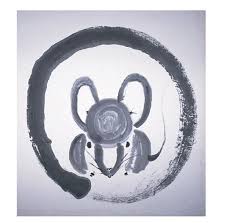 The “Year of the Rat” has certainly gotten off to an inauspicious start, what with the COVID-19 pandemic, trade wars, a shaky global economy, rampant racist-tinged nationalism, and even a plague of locusts beginning to sweep through nations in East Africa.

Yet, despite the prevailing gloom, one reason for solace and cheer is that 2020 also marks the 600th anniversary of the birth of Sesshu Toyo — perhaps the greatest painter in all of Japanese history.

Although not a household name like the woodblock print artists Hokusai or Hiroshige, Sesshu is by far more important in art history. Indeed, of the 162 paintings classified as National Treasures by the Japanese government, six are by Sesshu. This, despite the fact that there are only about 20 surviving works that can be definitively attributed to him. The next most honored artist has just three; there are no ukiyo-e on the list.

More than anything else, Sesshu’s ink paintings (suibokuga) exude the very spirit of Zen. 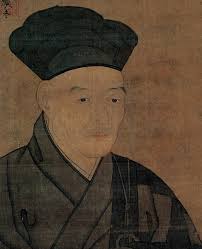 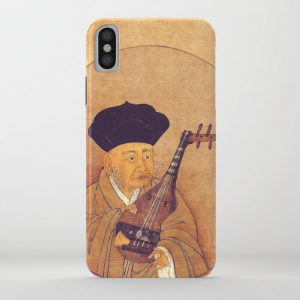 Sesshu was born to a lower-ranking samurai family in 1420 in what is today Okayama Prefecture. He was sent to a local temple called Hofuku-ji to train to become a Zen priest. But, according to a well-known legend, Sesshu was so obsessed with drawing that he neglected his religious studies to the point that the head priest tied him up to a pillar as punishment. When the priest returned to see how Sesshu was doing, he saw a mouse moving about at the foot of the pillar and rushed to prevent the novice monk from being bitten.

Lo and behold, Sesshu had used his toe to shape the tears he had wept in the dust at his feet into the shape of a life-like mouse. Another version of the story even has it that the rat gnawed away the ropes that bound the boy. 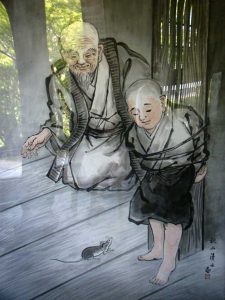 Later, Sesshu moved to Kyoto, where he studied under the famous painter Tensho Shubun. However, he seemed to have been little-known in the art world in his younger days, and all of his paintings from this period appeared to have been destroyed in the civil wars that ravaged the ancient capital.

The turning point in Sesshu’s career came when he was included in the diplomatic and trade mission sent by the Ouchi clan to Ming China in 1468. He remained in China for two years and even made his mark on the art scene there.

During his stay in China, Sesshu drew profound inspiration from the ink painting styles of Song Dynasty masters, especially Xia Gui. He embraced their spirit and then expressed it through his own avant garde techniques.

Upon his return to Japan, the artist found that Japan had gone mad in his absence, as the 10-year-long Onin War (1467-1477) reduced much of Kyoto to ashes before the fighting spread nationwide. Sesshu therefore spent most of the rest of his life in Kyushu and Western Japan.

Perhaps Sesshu’s most astonishing work is the National Treasure Huike Offering His Arm to Bodhidharma. According to the famous story as recorded in the Chinese Zen classic Collection from the Halls of Patriarchs of the Five Dynasties, a seeker of enlightenment named Shenguang visited the great India-born Zen master Damo (Bodhidharma) — the man who, by tradition, brought Zen (Chan) Buddhism to China — and begged to become his disciple. In order to show his determination, Shenguang cut off his own left arm and placed it in front of the master.

Damo then told Shenguang: “In their search for the Way of Enlightenment, buddhas and bodhisattvas thought nothing of their bodies and their lives. Having shown your own desire to engage in a search for Enlightenment regardless of the cost, you should do.” Damo thereupon accepted Shenguang as his disciple and named him Huike. 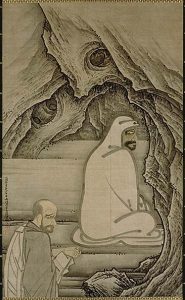 The art expert Yuji Yamashita has noted that the painting is almost manga-like in its design, with the Bodhidharma shown in a simply-traced outline and having rather crudely-drawn eyebrows, beard, and face. It is almost as if Sesshu was defying the belief that art requires fine technique. Yet, it all somehow comes together, and the result is a masterpiece. 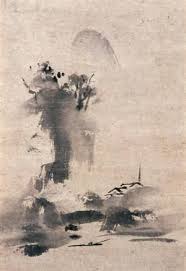 In his 1486 Winter landscape, the artist makes no attempt to adhere to the dictates of realism. In this and other paintings, he presages the ultimate freedom of abstract art. Although the human figure on the raft is tied to reality, this is offset by the jagged cliff thrusting vertically into the sky — with heaven and earth meeting in one magic mountain and bleeding into each other.

A close look at the paintings in the Autumn and Winter Landscapes Series reveals Sesshu’s fondness for harsh zigzagging boulders, trees, and cliffs that capture his wild energy and his unconventional, spiritual approach that defies existing artistic norms.

These actually form part of his most famous work, the 50-foot (15-meter) Long Scroll of Landscapes (Sansui chokan) that depicts the four seasons in sequence. It would appear that he painted at a torrid pace when creating some of his works.

Winter from Autumn and Winter Landscapes 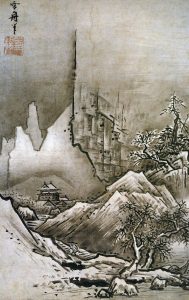 Another good example of how Sesshu overturned artistic norms is his View of Amanohashidate. Initially, it appears to be a rather conventional rendering of one of Japan’s “Three Most Scenic Spots” (namely: Amanohashidate, Matsushima, and Miyajima). However, you discover something quite unexpected if you compare photographs of the actual location with the scroll.

Despite the detailed depictions of buildings and people, Sesshu has exaggerated some things, excised others, and created something quite different from an accurate recreation of the beloved scene. Instead, it represents a “deformed” landscape, in which some things are put in different places, and some physical features are not even shown. For one thing, art expert Yamashita discovered that the bird’s eye perspective as shown in the scroll does not match reality. 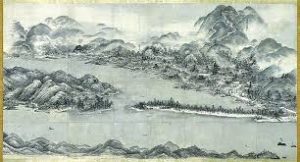 The highest hill in the area is 500 meters high, but Yamashita calculated that the angle of view in the scroll is that as would be seen from a helicopter flying at an altitude of 900 meters. Amanohashidate has traditionally been considered as a district sacred to the kami and Buddhas, and Sesshu has adopted the perspective of these deities looking downward. Since he could not have actually seen such a scene, he projected it in his imagination. Not only is it an amazing feat of alternative thinking, it is also evidence of how a religious consciousness informed everything he painted.

Although Sesshu was best known for his monochromatic ink paintings, he was also a talented designer of gardens, including one at the Funda-in sub-temple of Tofukuji in Kyoto. He died in 1506 at age 87, having lived a long, productive life dedicated to art and the spirit of Zen.