'Thank you For the Journey!' Attack on Titan Finishes After 11 Years 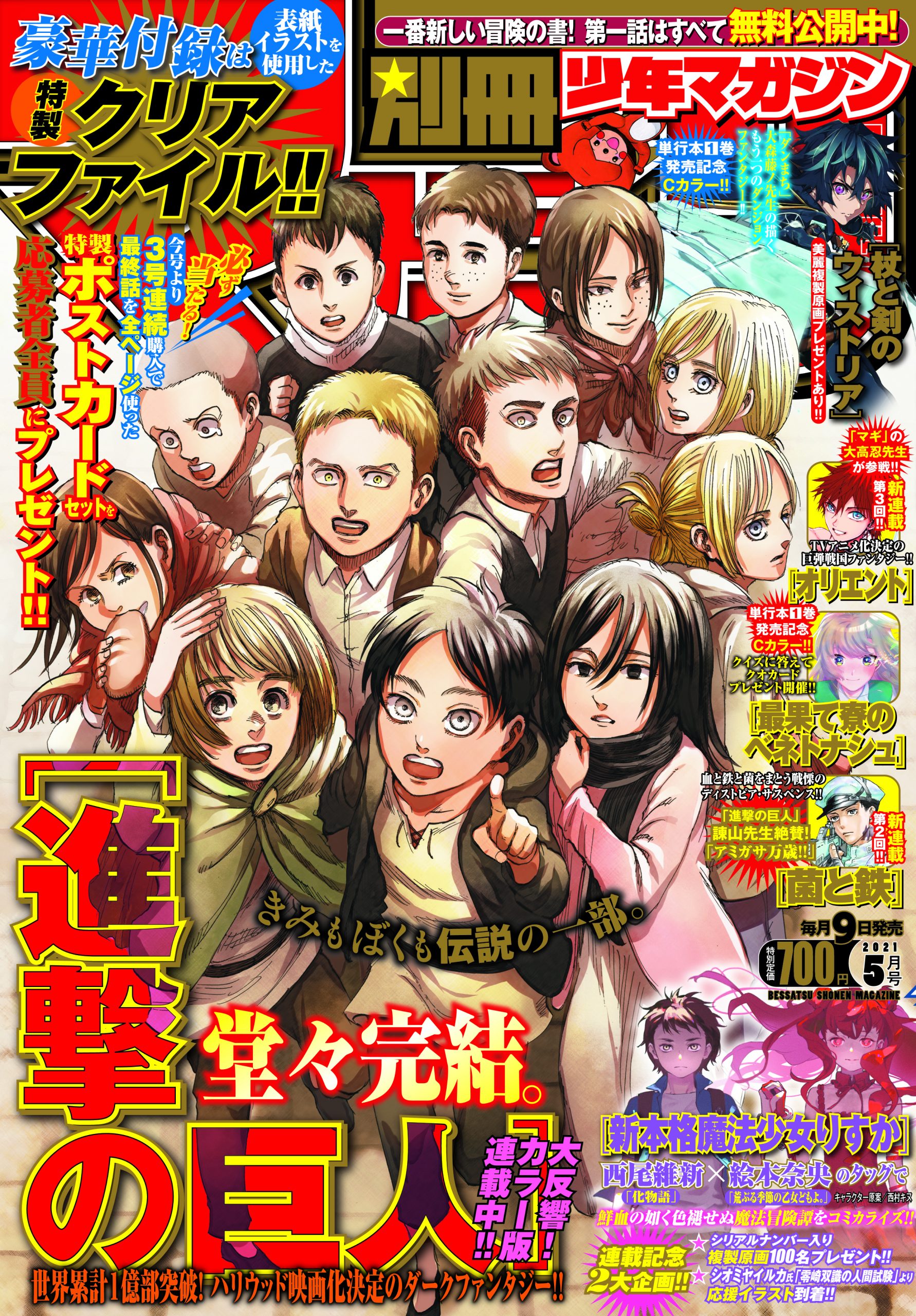 One of the major social phenomena of the 2010s has come to a close. The popular manga series by creator Hajime Isayama called Attack on Titan, or as it is known in Japanese, Shingeki no Kyojin, published its last episode of the series on April 9.

The 139th episode of the manga was published in the May issue of the monthly magazine Bessatsu Shonen (Kodansha Inc. publishers). It will also become the last chapter of the 34th and last volume of the manga book version, set to come out on June 9.

For the last episode, the magazine included a special thanks from Isayama, who took the time to thank his fans for all the support they have shown over the years.

Many netizens took to online platforms such as Twitter to express their sadness and gratitude to the manga artist, with the hashtag #ThankYouIsayama trending on Twitter. People were tagging the artist in several languages including English, Spanish, Russian, and more.

Attack on Titan centers around the story of young man Eren Yeager, and his quest to fight against the Titans attacking the city where he grows up. What starts off as a story for survival becomes an intricate tale of politics and human drama, addressing problems universal even in today’s world.

The manga’s popularity skyrocketed when it became an anime series. The anime started in 2013 and will also end with The Final Season in late 2021 or early 2022.

There are plans to turn the manga into a Hollywood live action rendition to be filmed by Andy Muschietti, the director behind the horror film, It (2017).

The Sankei Shimbun reporter Eiji Honma spoke to Shintaro Kawakubo (38), the Kodansha editor in charge of Attack on Titan, to learn more about what makes this story so popular.

A Manga Which Will be Talked About for 1,000 Years

It turns out, the story of Attack on Titan goes back 15 year, to 2006. At the time, the newly hired Kawakubo was 23, and he happened to respond to a phone call by aspiring manga artist Hajime Isayama. Kawakubo saw the talent of the creator, and pushed his superiors and colleagues to give him exposure. The manga was first serialized in 2009, and the anime followed in 2013.

Looking back, Kawakubo commented, “If I blow this up too much I think Isayama might complain, but I think this is a work which will continue to be talked about for 1,000 years.”

The particularity of this manga is that it’s incredibly popular abroad. After each chapter is published, one can see comments online reacting to the comic in English, Chinese, Arabic, and more. According to Kodansha, the manga is published in 21 countries and regions, with the online manga released in more than 180 countries and regions. In total, more than 100,000 million copies have been sold.

So why is the manga so popular? Kawakubo reflects that: “The interesting part of the manga changes with each volume. First, there is the shock and impact of the titans eating humans, and with that it’s easy to shock people. But afterwards it switches the readers’ attention by using suspense and mystery, and it becomes a political tale. Finally, the key people gradually dwindle, so it’s a [human] drama as well.”

In fact, it appears that the ability to pull the reader into the story is also found in the manga artist himself. According to Kawakubo:

“Isayama from the start said: ‘I want to develop the story in the second half, [but first] I want to hurt people, to wound them.’ Now, this is meant to be with a good connotation, in the sense that he wanted to shock them, to shake their hearts at the core. He himself said he had been hurt after playing the PC game Muv-Luv Alternative. This time, as a creator, he wanted to be the one to do the hurting, and I think that was one of the elements of his creativity.”

The manga was originally supposed to finish in 20 volumes, but it has now published 33, with the final and 34th volume coming out in June. The main reason appears to be that the characters have increased.

Kawakubo noted this, concluding: “With more characters, then one has to write the stories of each of them. I genuinely think that this is a universal manga, one which talks about everything that there is in the world.”

It Wasn’t All Smooth Sailing: When the Manga’s Popularity Dropped

Good stories often don’t have a straight line. This too was the case for Attack on Titan.

Kawakubo recalled that things got difficult “between volume 20 and volume 30.” The first boom had subsided, and the story was reaching a new phase.

“Our sales dropped dramatically. There came to be a gap between the Attack on Titan which I found so interesting, and the evaluation of fans from all over the world. It was a painful time.”

To turn it around, the publisher made a drastic attempt to bring back fans. Timed to the 10th anniversary of the series, Kodansha experimented with making the whole manga series available virtually for free.

According to Kawakubo, it was “a last resort,” but it bore fruit. Many readers who had given up on the manga returned, and sales picked up once again.

“I am proud, because I don’t think there is any manga in the world that has worked on its marketing as much as we have,” concluded the Kodansha editor. “We had times when we really felt how hard it was to get customers to read our work.”

The Universality of ‘Attack on Titan’

When reflecting on what makes the work so relatable, Kawakubo brought up the commonality with renowned author Haruki Murakami:

Old and young, male or female, people from all over the world read Murakami and think, “this is my story.” That is the strength of Murakami. He connects with people, taking something deep inside their soul and putting it in his novels. He takes what is common, he taps into what is “universal” to us all. I think that Isayama does something similar, and there are only a certain number of people in this world who can do that.

In other words, I think that a story needs things that are hard to put into words, or hard to name and pin down. In the case of Attack on Titan, this could be the wall, or the titans themselves. Where were these titans born? What do they symbolize, what do they mean to each one of us? If we all think about world values, characters, and what they mean to us, we will find answers, and then it becomes the story of everyone.

Finally, the editor said: “Hayama probably has his own walls, his own titans. He needs to in order to be a creator. But he can’t properly put it into words, so that is why he writes his manga.”

“Let’s finish this soon, shall we?” These were apparently the buzzwords exchanged between Isayama and Kawakubo over the time of their collaboration, noting that both were young when the manga started.

“I’ve always thought that a manga artist such as Hajime Isayama is capable of producing one or two other works of the same caliber as Attack on Titan,” Kawakubo reflected. “Isayama often says that writing Attack on Titan coincided with his youth. I think I feel something similar, it was a fun time.”

And the manga keeps swaying the hearts of everyone around the world. On March 30, the birthday of the main character Eren, Kawakubo received the final draft of the last chapter by Isayama.

“The thing about Attack on Titan is that your impression of it will change each time you read it. Re-reading past chapters, you notice little hints and gimmicks to later parts of the story. Depending on your state of mind, you will notice different things. It’s the kind of work that, after you finish reading the last chapter, you get excited wondering what it will be like to read it again from the start.”

And perhaps it’s no coincidence that Shuji Sawamura, a professor specializing in publishing culture at Shutoku University, mentions the manga in his work called The Complete History of Japanese Manga (Heibonsha Shinsho Publishing, 2020):

“Just looking at the numbers and influence, this is a work destined to remain in history. The 2010s were a time when there was anger and a sense of obstruction towards modern society, which was robbing people of their future. I think it’s because of this that the many young readers understood the fear and hate towards the Titans, and empathized with the main characters and their strong feelings of wanting to fight. This is a work which will become an essential comment on the mood of the 2010s, quite apart from the framework of manga.”

The final 34th volume of Attack on Titan is set to come out on June 9.

(Read the related Sankei Shimbun story at this link.)

This article includes the contributions of Eiji Honma, staff writer for The Sankei Shimbun