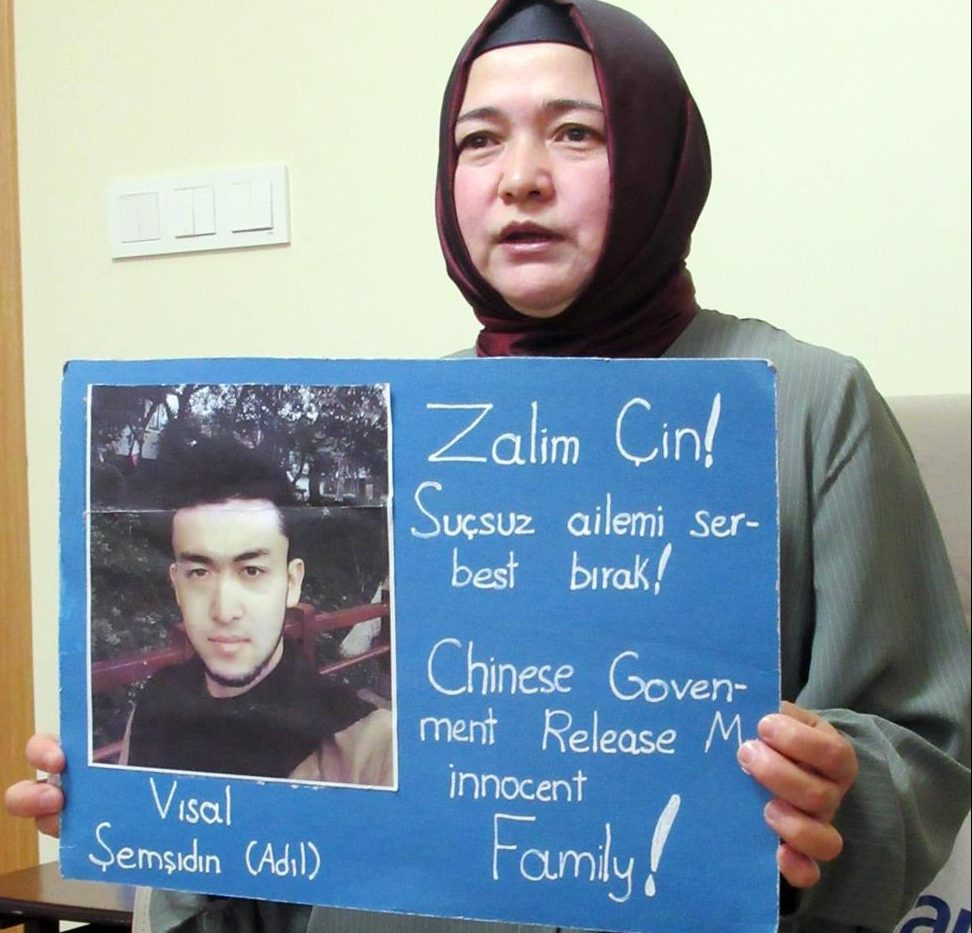 Calvinul Kamal, who has fled to Turkey, shows a panel calling for the release of his nephew, who has gone missing in Urumqi, capital of the Xinjiang Uyghur Autonomous Region, since 2017. (Photographed by Takao Sato)

ISTANBUL, Turkey — A woman doctor from the ethnic Uyghur minority, now exiled in Turkey, painted a vivid picture of the Chinese crackdown on human rights in Xinjiang in an interview with The Sankei Shimbun.

The woman revealed that “on some days there were about 80 surgeries to carry out forced sterilizations,” testifying to her own role in this large-scale program carried out in the autonomous region.

The Chinese have denied the forced sterilizations, but the international community, including the European Union and the United States, view it as a case of “genocide.”

The doctor, Gülgine, 47, had worked as a gynecologist in the autonomous region of Xinjiang. She immigrated in 2011 to Istanbul, Turkey’s largest city, where the interview took place.

“A lot of women were put on the back of a truck and sent to the hospital,” she said. “The [sterilization] procedure took about five minutes each, but the women were crying because they did not know what was happening to them.”

Gülgine herself carried out sterilizations at a hospital in Urumqi, capital of the autonomous region. Showing pictures of T-shaped and U-shaped intrauterine devices (IUDs), she explained that “these devices were inserted into women’s wombs.”

Since 2014, the number of residents who were sterilized in the autonomous region had increased rapidly, according to Chinese government statistics. As of 2018, there were about 60,000 men and women who were sterilized by the binding of the seminal duct and fallopian tubes, about 14 times as many as in 2013. Procedures to implant IUDs were performed at a rate of 200,000 to 300,000 people each year. As of 2017, about 3.12 million women had been fitted with this contraceptive device, accounting for 60% of married women of childbearing age.

According to Gülgine, forced infertility probably began systematically in the autonomous region from around 1980. That was a year after China started birth restrictions under the “one child policy.”

“I understood the meaning of the surgery, but I later learned that it was a policy for the Uyghur,” she said, “and I too was sterilized.”

Other Uyghur women who fled to Istanbul because they couldn’t stand living in the autonomous region have sometimes gone to talk to Gülgine, complaining that they cannot have children. She has examined more than 150 so far, but many don’t know they have been sterilized, and some women start crying in anger when she explains what has happened to them.

If the IUD is left in the womb for a long time, it could adhere to the surrounding tissue, making it difficult to remove without breaking a bone. It could also cause infection and cancer, and some women have experienced mental health problems.

Gülgine believes the Chinese adopted the forced infertility policy to keep Uyghurs in a minority status. Afraid of repercussions against her relatives living in Xinjiang, she declined to give her last name or to have her photograph taken.

Through Gülgine’s introduction, I met Calvinul Kamal, 50, a housewife living in Istanbul.

Kamal was sterilized on the day she gave birth to her third child in July 2006, when she was living in Gurja, in the Uyghur Autonomous Region.

A third child was not allowed in urban areas of the Xinjiang autonomous region due to China’s population control policy. For this reason, she gave birth pretending to be the wife of an older brother who had only one child. Immediately afterwards, she was made to sign a pledge in hospital that she would not have another child, and was sterilized.

Kamal said she felt as though “this body is no longer mine.” She became depressed and felt ill for about two months. When she confessed to her mother about the sterilization, she discovered to her surprise that her mother, too, had been sterilized. Then she found that many of her friends had met the same fate.

For a while, her third child was raised by her brother and his wife. But after the uprising in Urumqi in 2009, the Chinese government temporarily relaxed the restrictions against third children as a special concession. Kamal bribed the officials, re-registered the child as her own, and took custody over him.

With the conviction that “we are not welcome in this country, and there is no future here,” Kamal and her husband escaped China in 2013 with their three children.

“Just because you come to Turkey doesn’t mean your worries have ended,” said Kamal. “Not a day goes by that I don’t think about my many relatives sent to the camps, and I can’t sleep at night.”

Kamal is now working to press Chinese authorities to free her nephew, who was abruptly taken from his workplace in Urumqi in 2017 and has been missing ever since.

(Read The Sankei Shimbun interview report in Japanese at this link.)