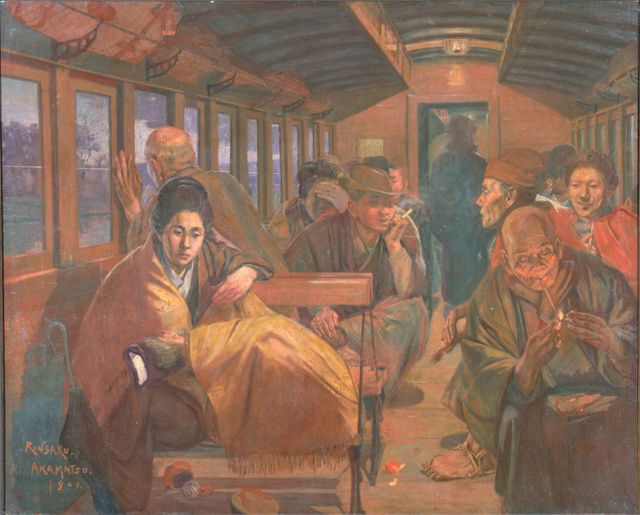 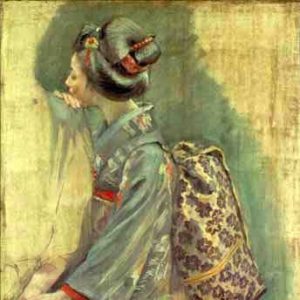 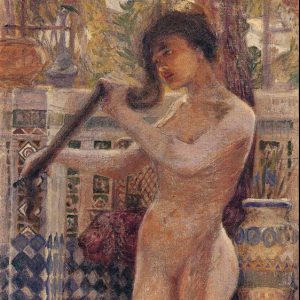 But how familiar are you with the beginnings of modern Japanese painting, when art students set out to Europe to learn the techniques of perspective, shading, and color theory? They came back equipped to show the world in which they lived in a way that had remained uncaptured.

I’m no art critic, and I’m certainly not an academic expert when it comes to the history of cultural exchange in the arts between the East and West. However, it was a few months ago that I first saw a work of art by the artist Shigeru Aoki, titled “Onsen.” The painting is simple in composition — a woman stands center in the shallow water of a titular bathhouse. She is holding her hair in her hands, wringing it out, while staring off-camera into the distance. Her face is darkened and somber, and her limbs and wrists are bent in strong, posed positions.

All at once, it hit me as undeniably Japanese, but viewed through a lens that I had never quite seen before.

Yōga (洋画, literally “Western images”) is a Japanese word for Western-style media produced in or brought to Japan.

Nowadays, it is most often used to describe the American and European films running in Japanese movie theatres — films produced in Hollywood, Paris, or any other place outside of Japan. However, the first use of the term was as a descriptor for what, at the time, was seen as non-Japanese forms of art: oil painting, pencil sketching, and other European disciplines.

As early as the Edo period, research institutes were being established to translate and repurpose foreign knowledge acquired from Dutch and French books brought to Japan. These tomes were poured over and mined for useful information.

Though the country had encountered foreign artists and artwork before in the form of missionary envoys and early explorers, it was from these books that some Japanese began to formally study the art of the West for the first time.

As Western art began to trickle into the country, some local artists began to emulate the style and technique of the artwork they most appreciated. Some studied with foreign artists living in Japan, and many went so far as France for a formal education in oil painting or portraiture.

Japanese art, it was said, was made on rice paper. Japanese artists had to use ink brushes, and the emphasis was on flatness, gradient of color, and an aesthetic of floating serenity. This was true Japanese art (Nihonga, 日本画, literally “Japanese images”).

The artists began to draw lines in the sand and pick sides. Would they be a classical, Japan-focused artist working in the ancient techniques such as ukiyo-e, or would they adopt this new, bombastic art form that had washed up on their shores?

While today the two art forms remain segregated at many art competitions, and artists in one discipline rarely share a platform with creators of the other discipline, there is more and more bleeding between the two. But it hasn’t always been that way.

At times, early yōga paintings can look indistinguishable from their European contemporaries. Japanese painters who were focused on emulating their foreign teachers often chose subjects such as Caucasian women or Parisian scenes as subjects. Hosui Yamamoto’s portrait of the orientalist Judith Gautier comes to mind — a piece that is uniformly and thoroughly French in every aspect of its composition, from color to perspective to subject.

The Japanese students brought these skills back with them, though. And from there, used these techniques to give the world a glimpse into Japan with a brand new, more detailed set of eyes.

Topics and subjects of these yōga artworks are often simple and contemplative. A common subject, as with every culture, is everyday people — particularly Japanese women. Often set on lakesides or in fields, a more intimate setting that proved very popular was the previously mentioned onsen, hot spring, and bathhouse.

Blue-collar workers also proved popular, particularly farmers and fishermen. The texturing and shading of Western disciplines allowed Japanese artists to better differentiate these workers’ beaten and leathered appearances against the pure white and unblemished skin of the upper-class.

What strikes me most about these renderings is how much more they humanize their subjects than the art of previous eras. While stylized portraits and scrolls of court women with black dots for eyes can make for a beautiful series of images, the ability to see the subjects’ pupils and read their complex expressions allows us as viewers to try and guess their mindset — we can take a stab in the dark at how they feel for the society they’re living in.

A particular set of paintings that have resonated with me are oil pieces done by the artist Kiyoo Kawamura. This series takes the composition of historical Japanese portraits of high-level court subjects, but filters them through the texturing and realistic rendering of European portraiture. It’s an extremely pleasing aesthetic, and manages to avoid the “uncanny valley” issue while still blending the real world of Europe and the floating world above the clouds in Japanese art.

Tokugawa Yoshinobu sits facing directly at the viewer. His robes fall gently in the crotch of his arm and he holds a fan in his right hand — the detailed brush strokes allow us to see that he isn’t gripping it firmly.

His face is stern, most likely held in a rehearsed and well-practiced expression of wisdom and courage. He is fully wrapped up in his oversized court dress, and we can see the multi-colored layers of kimono neck lines poking out around his throat.

Because of the rapid globalization of the modern day, it’s no longer jarring or memorable to see an oil painting or watercolor from a Japanese artist – at least, no more than an artist of any other background or nationality. City streets in Tokyo look like city streets around the world. Japan, while idiosyncratic, is far less visibly foreign to the rest of the world, and perhaps that exoticism is lost forever.

Many traditional yōga pieces have been well-preserved and archived online. Wikimedia Commons, a partner site to Wikipedia focused on collecting and distributing images, offers a large selection of sketches and paintings by early yōga artists.

I keep some of these online resources bookmarked, and come back to them every few weeks for inspiration in my creative life. Artists of every discipline can learn something from the scenes that these artists captured and the humanity that they gave to their subjects.

If you want to spend a lazy afternoon in a meaningful way, consider searching out some yōga artwork and getting lost in the scenes. Check out art museums in your area, your local library, or even just online resources, all which have expansive catalogues of yōga paintings.

It’s an incredible, tangible way for us to look back at when the Japanese art sphere embraced the outside world for the first time — and we can learn a lot just by studying what they wanted to show us about their homeland.

Timothy Nerozzi is an American journalist living and writing in Niigata, Japan. He reports on Japanese society, Vatican politics, and international policy.