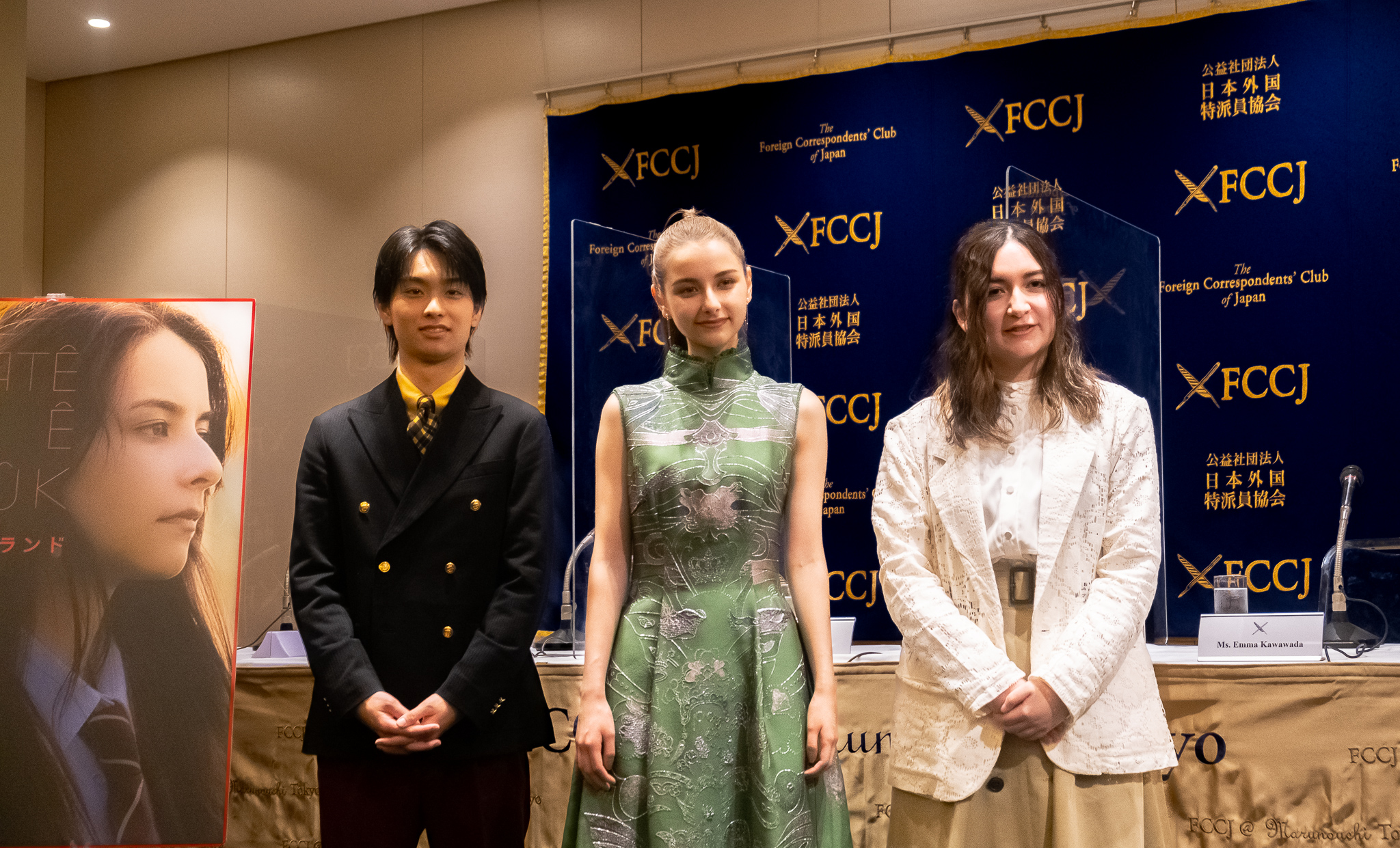 Based on a fictional screenplay written by Emma Kawawada, My Small Land spotlights the challenges faced by asylum seekers living in Japan.

The director, young by Japanese standards, is a graduate of Waseda university where she made her first film, Circle, and brought home her first film award, at the Tokyo Student Film Festival. She later joined the production company BUN-BUKU, led by Palme d’Or winning Hirokazu Kore-eda and Cannes nominee Miwa Nishikawa. There she served as the assistant director for Kore-eda’s The Third Murder.

Now on her own, she used her screenplay of fiction to present the truths of many invisible people (refugees) in a documentary-like film format.

Following a sneak preview of “My Small Land” at the Foreign Correspondents’ Club of Japan (FCCJ) in Tokyo on April 20, members of the press had the opportunity to ask questions from the cast and director.

Making the Story Into a Movie

The film portrays a Kurdish refugee girl Sarya (17) and her family’s life in Japan.

She’s introduced as a young woman with a promising future ahead. She is a good student, surrounded by friends, and forming a meaningful relationship with Sota.

However, Sarya’s life is suddenly turned upside down when her family’s refugee status is denied. As a result, her family’s rights to work or move freely in the country are also denied.

Despite working to support the family, her father has been taken into custody for illegal employment. It has suddenly gotten to the point where Sarya is responsible not just for her own life but also for her siblings.

Throughout the story Sarya struggles to find her way back into society.

Actress Lina Arashi (17), stars in the movie, portraying Sarya, a Kurdish refugee who is her same age. Arashi attended the FCCJ movie screening, along with fellow co-star Daiken Okudaira and director Emma Kawawada.

Before being selected for the movie, Arashi had enjoyed a successful career as a fashion model. But she has roots in five countries: Iran, Iraq, Russia, Russia, Japan and Germany.

My Small Land was her film debut.

Kawawada’s storyline connects to strong personal interests in the multi-ethnic background of Arashi’s life. During the press conference, she said, “I can’t believe I’m here, but I’m very glad to be here.” Then, with a strong gaze, she added, “I want to spread this film as widely as possible.”

“We auditioned one by one and never thought that we’d all be accepted and appear in the film as a family,” Arashi said with a smile.

Commenting on the casting process, Kawawada explained that initially the directors had planned on having a Kurdish protagonist who lives in Japan play the lead role. However, in the end it was decided to avoid the risk that it would create if whoever is selected is applying for refugee status while appearing in the film.

Okudaira (18) is Japanese, like the character he plays. He began acting just two years ago, with his film debut in the 2020 feature Mother.

Acting in the 2020 film earned Okudaira the Newcomer of the Year prize at four different film awards, including the Japan Academy Film Prize, the Japanese Movie Critics Award, the Kinema Junpo top ten, and the Blue Ribbon Award, all in the same year.

Before shooting the film, Arashi talked to a Kurdish family living in Japan. According to her, the family was in a difficult situation. “I also had the opportunity to try some Kurdish food.” she added.

Okudaira admits he didn’t know about refugee issues in Japan until he began filming. Explaining, he said, “If I had known before shooting, it would have affected my reaction as Sota. So I talked with the director about not doing any research on Kurdish culture and issues beforehand, but rather just figure it out as we worked through the story.”

Bringing Out the Characters

Arashi in particular had warm words for director Kawawada. Noting that it was her debut movie, Arashi thanked the director for always being there to ease her fears and anxieties.

“She took time to explain the role of Sarya to me when I was unsure how I should approach it. I am honored to have my first film directed by Ms. Kawawada,” Arashi told the press.

Socially-conscious films are typically thought of as having a high threshold. In this case, the film includes a coming-of-age story, which will have a different impact on each generation, Kawawada believes.

This film should be seen and appreciated by as many people as possible, of all generations, she says.

The film will be released for public viewing in select theaters in Tokyo and elsewhere in Japan starting May 6, 2022.