The Dangers of Entering Into ‘Dialogue-Mode’ Over North Korea

North Korean beauties have arrived at the PyeongChang Olympic venue on February 7.

Will the situation play out as thought by North Korean Leader Kim Jong-un? Whether it follows predictions or not, the Moon Jae-in administration is set to welcome North Korea’s participation during the PyeongChang Olympic Games with open arms, despite domestic opposition and concerns by the United States. They are poised even to break sanctions.

It is common knowledge that, in order to unify the peninsula, North Korea has long endeavored to make the U.S. recognize it as a nuclear state. It presents itself as pro-dialogue to buy time in order to carry out deployment of intercontinental ballistic missiles (ICBM) capable of targeting major cities on the eastern coast of U.S. with nuclear warheads.

North Korea, which was cornered by a warning net and slowly, yet increasingly, effective sanctions, is taking full advantage of “PyeongChang” to reverse the situation by using South Korea as the small leak that will sink a great ship.

This is the current situation.

From last year’s “Brinkmanship Show” involving the North’s 6th nuclear test and ICBM launches—reportedly capable of attacking the American mainland—to the “North-South Dialogue / Peace Performance,” the tense atmosphere of possible war has suddenly dissolved. What is going on?

Some in the Prime Minister’s circle say that the growing mood in the international community is of reluctance toward U.S military action.

Analysis by officials is that the international community and North Korea have entered a “dialogue phase.”

At the 20-nation foreign ministers’ meeting in Vancouver, Canada, on the 16th of last month, South Korea expressed a desire to resume support for North Korea. Although this suggestion was quashed by Japan, England and the U.S. Even then, however, there was a wide range of opinions voiced by the remaining 16 countries—albeit unofficially—such as, “We will mediate US-North Korea talks,” and “We will contribute to creating a North Korean support mechanism through non-government organizations.”

Originally, in his State of the Union address, President Trump emphasized that, “Concessions lead to attacks and provocation. We will not repeat the mistakes of past administrations” in reference to North Korean policy. This view is unlikely to change quickly.

That being said, a government official was, nonetheless, surprised to receive a report from security personnel who inspected the United States Pacific Command, saying, “There is absolutely no (atmosphere of readiness to attack North Korea).”

The booming U.S. economy could have the power of persuasion to coax a “hint” of dialogue from the U.S. government.

An attack on North Korea by the U.S. would increase risk to the nation and, likely, incur a chain-effect stock price drop, albeit temporary, in Seoul, Tokyo and New York.

“Would the Trump administration, which has emphasized the effects of reduced taxes as a background to the economy, take the risk of attacking North Korea? Of course, there is also the opinion within the government that there could be a barter or some kind of concession in exchange for stopping the threats against the U.S.” (Government official) 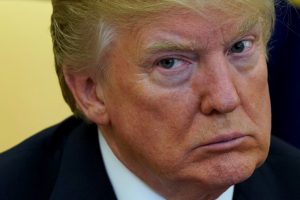 In this situation, the Pyongyang’s biggest goal would be to bring a complete halt to the U.S.-South Korean Joint Military exercise, which has been delayed until after the Paralympic Games that ends on March 18th.

There are continuing calls, from domestic pro-North groups, for the Moon administration to “completely halt” these military exercises. The Workers’ Newspaper on January 17th published the piece, “The North and the South should both join hands to build peace.”

U.S. Defense Secretary Jim Mattis says the current delay is “not a concession to the North.” However, even before now, South Korean Joint Military exercises have been a bargaining chip between the U.S., South Korea, and North Korea. Often influenced by alternating North Korean “dialogue” and provocations,” the military exercises have been repeatedly halted and resumed since Team Spirit (TS) began in 1976. Typically involving some 200,000 to 300, 000 personnel, the U.S. military commitment is generally 10,000 to 20,000. The majority of personnel are from the South Korean military.

TS was halted in 1994, but it resumed in 2011, the year after the sinking of the ROK corvette Cheonan and the Bombardment of Yeonpyeong. When it started back up, approximately 212,800 personnel were deployed. This included 12,800 U.S. military personnel. One can also interpret the troop deployment as being dependent upon the incumbent South Korean government administration.

Even if the joint exercises are not halted, what would happen if the Moon administration took the step of drastically reducing the number of soldiers involved? It is possible that the mood to view North Korea as a dialogue partner, even if it has 200 Nodong missiles pointed at Japan, could permeate the broader international community.

Until this point, regardless of the dependence upon U.S. military strength, Japan has maintained a framework to resolve the kidnapping, nuclear, and missile issues with North Korea. However, it is possible that a situation may evolve that does not fulfill this premise. This view appears to be gaining ground in Japan in light of the current U.S.-North Korean situation.