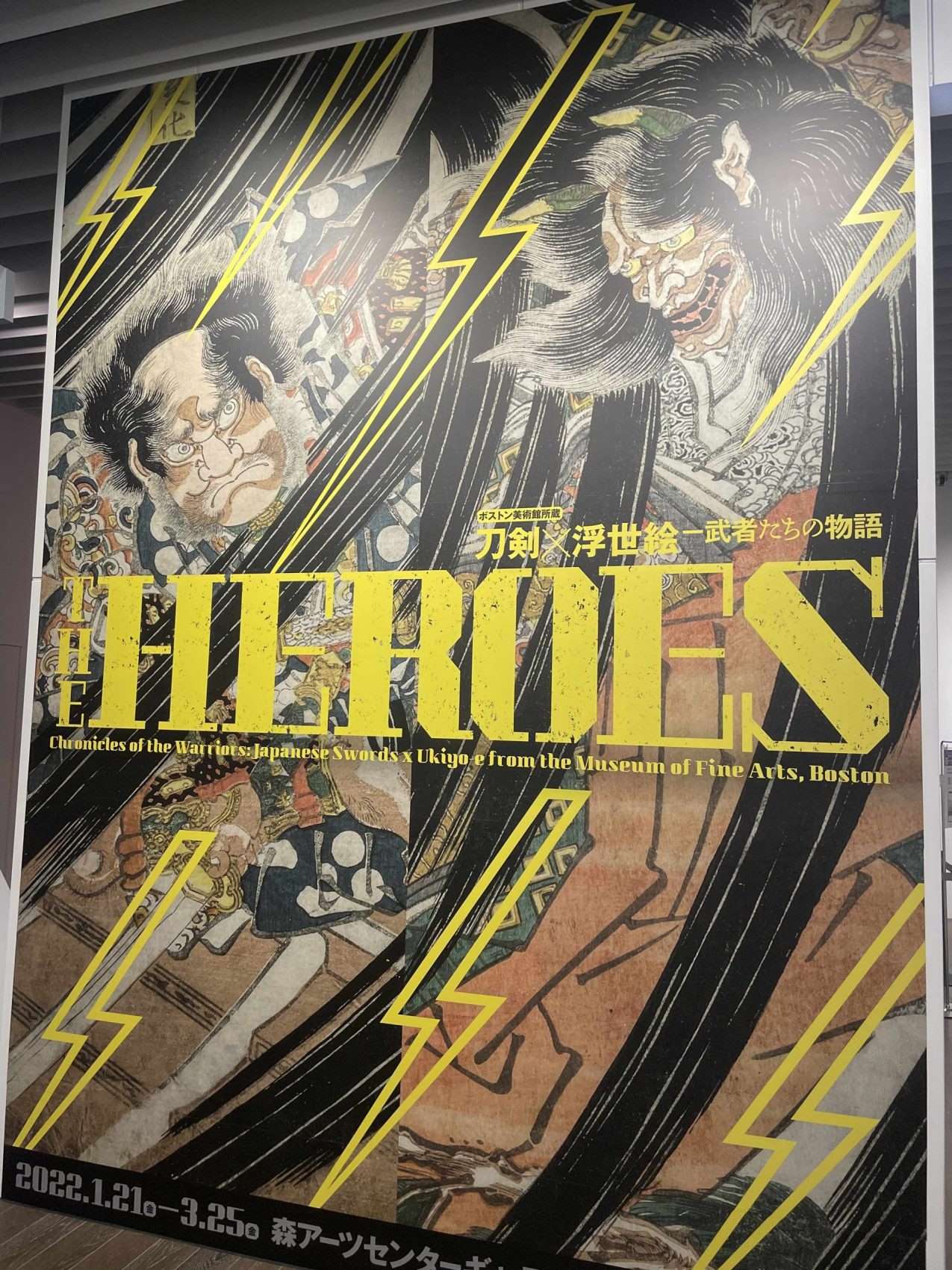 Poster for Ukiyo-e Heros at the Mori Arts Center in Roppongi. (Photograph=Frank Witkam)

For most people, the first image that comes to mind when they think of Japanese woodblock prints is Hokusai’s iconic wave, possibly the most reproduced artwork in the world, or Hiroshige’s plum garden, which Vincent van Gogh famously copied in oils. Much less well known, but as fascinating as these landscapes prints, is the captivating genre of warrior prints, so-called musha-e.

Woodblock prints showing stories from Japan’s rich canon of warrior tales form the main attraction of The Heroes – Chronicles of the Warriors: Japanese Swords x Ukiyo-e from the Museum of Fine Arts, Boston. It is an exhibition currently held at the Mori Arts Center in Roppongi.

The exhibition draws from the extensive collection of warrior prints in the collection of the Museum of Fine Arts in Boston, as well as famous swords and sword mountings.

As explained in the exhibition catalog, the origins of warrior prints are deeply connected to the practice of donating pictures to temples and shrines as prayers or expressions of gratitude.

Initially, devotees would donate horses and pictures of horses (ema). But by the mid-17th century, such pictures were no longer limited to horses. They also included medieval warriors such as the fierce warrior monk Benkei.

During the 18th and 19th centuries, artists still relied on printed collections of warrior pictures from Kyoto’s temples and shrines. This might be what sets them apart from other contemporary print genres, such as actor prints (yakusha-e) or pictures of beautiful women (bijinga): their faithfulness to established iconographies. By including the same scenes from warrior tales as earlier artists in similar compositions, the stories shown in their pictures were instantly recognizable for their audiences.

The Defeat of the Earth Spider tells the story of the medieval samurai Minamoto no Yorimitsu, who is lying sick in bed and visited by a strange priest. The priest then suddenly turns into a monstrous spider throwing out threads to entangle Yorimitsu, but Yorimitsu manages to keep the spider at bay (see image 2). Later, he traces down the spider in an ancient tomb with his bravest retainers and kills it.

The story of the Earth Spider was retold numerous times in storybooks and depicted by various print artists. Artists would either show Yorimitsu drawing his sword at the spider visiting him at night, or Yorimitsu’s slaying of the spider in its tomb. These two scenes remained popular in woodblock prints for many decades. And as The Heroes shows, were often depicted in a remarkably similar way.

The iconographies of warrior tales in woodblock prints also found their way to other visual media, such as festival carts, tattoos, and prominently featured in this exhibition, sword guards (tsuba) (see image 3).

When comparing the depictions of the earth spider visiting Yorimitsu in woodblock prints and sword guards, it is clear the artisans behind these works started from the same visual lineage. The organizers of The Heroes succeed in pointing this out surprisingly well.

While the story of the Earth Spider is a relatively simple one, the exhibition also includes prints of more complex tales where, at times, even identifying the main character can be hard.

Explaining such tales to the viewer seems like a daunting task, but the organizers have come up with a brilliant solution to that problem: concise four-panel manga illustrating the narratives with brief explanations.

As mentioned earlier, The Warriors not only features warrior prints and sword guards, but also famous swords used by some of Japan’s most renowned warriors.

In some rooms the swords are displayed in the same room as prints of some of the warriors who wielded them.

The exhibition also provides the rare opportunity to view a selection of rare swords from the Boston Museum of Fine Arts. These swords include early masterpieces from the 11th to the late 18th century, ranging from long swords (tachi and katana) to short ones (tantō), and sword mountings. The exhibition concludes with a mesmerizing selection of swords and mountings from a wide range of eras.

Finally, the exhibition catalog is completely bilingual (Japanese and English) and highly recommended. It includes fine reproductions of the artworks, informative texts on the role of swords in warrior prints and the origins of the genre and key artists by Japanese woodblock print authorities Sarah E. Thompson and Yuriko Iwakiri. It also includes a short essay on the Boston Museum of Fine Arts sword collection by sword expert Harada Kazutoshi, and brief summaries and the concise four-panel manga by Sekiguchi Shun explaining the exhibition’s warrior tales.

Where: Mori Arts Center in Roppongi